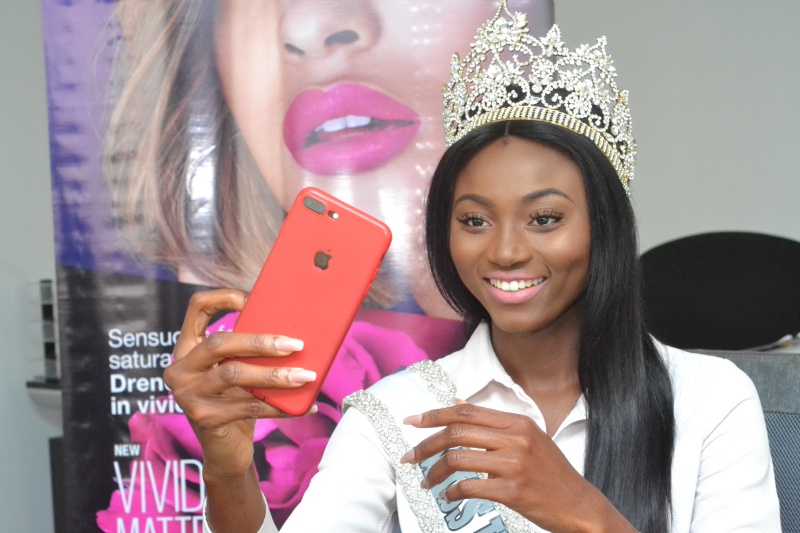 Ms. Quashie and her team have visited the office of Maybelline on the Spintex Road in Accra to show her appreciation to the international make-up brand for supporting her and the pageant.

Brand Manager for Maybelline New York in Ghana, Aretha Yorke Sabeng and her team warmly welcomed the queen and her team and congratulated her for being the chosen queen among the lots and also encouraged the reigning queen to shine on the international stage and bring the Miss Universe crown to Ghana.

Maybelline, which is the queen’s official makeup company, presented a complete makeup package to the queen as part of her prize package for winning the crown.

Maybelline New York in Ghana will provide one-year supply of makeup products   for the Miss Universe 2017 queen and also support her and ensure that she glows on stage at Miss Universe International in America come November.

Ruth Quashie thanked Maybelline for their support and promised to make Ghana proud.

“Thank you very much Maybelline for these amazing products. I am going to slay at Miss Universe and make Ghana proud. Thank you”.

Ruth Quashie, a 23-year-old Business Administration graduate who hails from the Central Region beat 120 young women from across Ghana with her ‘confidence, attentiveness and beauty to win the coveted title on Saturday September 2, 2017 at Labadi Beach Hotel in Accra, Ghana.

Beautiful and eloquent Ruth Quashie is preparing to face the rest of the world and represent at Miss Universe 2017 pageant to be held on November 26, 2017 at The AXIS, Las Vegas, Nevada, United States.

https://ameyawdebrah.com/schooling-new-york-film-academy-banky-w-premieres-music-film-experience-lagos/]]>
Related Topics:
Up Next

16 years after Big Brother Africa season 1, here is what the original housemates have been up to