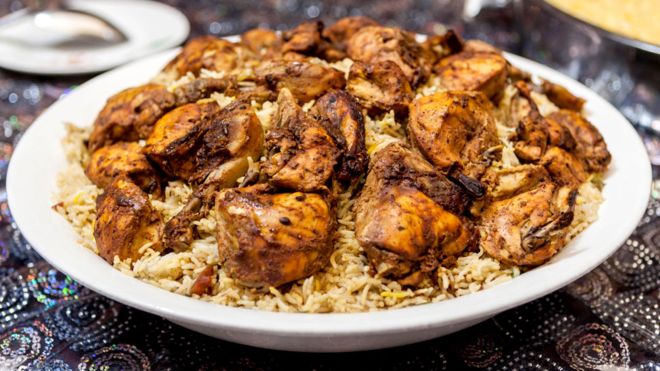 A Moroccan woman has been accused of killing her lover and serving up his remains to Pakistani workers in the United Arab Emirates, prosecutors say.

The woman killed her boyfriend three months ago, they say, but the crime was only recently discovered when a human tooth was found inside her blender. She confessed to police, calling it a moment of “insanity”, state-owned newspaper The National reports. The woman, who is in her 30s, will go on trial pending an investigation. She had been in a relationship with the victim for seven years. According to The National, she killed him after he told her he was planning to marry someone else from Morocco. While police did not reveal how he was killed, they said his girlfriend had served up his remains as part of a traditional rice and meat dish to some Pakistani nationals working nearby. The discovery was only made when the victim’s brother went looking for him at their home in the city of Al Ain, which sits on the border with Oman. There, he found a human tooth inside a blender, the newspaper reports. The man went on to report his brother missing to police, who carried out DNA tests on the tooth and confirmed it belonged to the victim. According to police, the woman first told the brother she had kicked the victim out of the home. But Dubai-based Gulf News said she later collapsed and admitted the killing under police questioning. She reportedly said she had enlisted the help of friend to help clear up her apartment after the killing. The accused has reportedly been sent to hospital for mental health checks. Source: BBC    ]]>
Related Topics:
Up Next

Cheryl, 61, and Quran McCain, 24, who became TikTok sensations by sharing details about their relationship with more than 2.3 million followers on just one account (@Kingqurannewpage), have revealed they are willing to spend up to £120,000 on a surrogate to have a baby together. END_OF_DOCUMENT_TOKEN_TO_BE_REPLACED

The BBC has received six complaints against disgraced DJ Tim Westwood over alleged bullying and sexual misconduct, including a historical one that was referred to the police, despite previously insisting it was unaware of any concerns about the DJ’s behaviour. END_OF_DOCUMENT_TOKEN_TO_BE_REPLACED

Amber Heard’s legal teams filed an official motion in court on Friday that the verdict in her blockbuster case against Johnny Depp is thrown out. END_OF_DOCUMENT_TOKEN_TO_BE_REPLACED

US clergyman, Creflo Dollar, has denounced his position on tithing. For many years, Creflo had preached on the importance of Tithing and had informed his congregation that failing to tithe opens the door for devourers to come in and destroy a person’s life. END_OF_DOCUMENT_TOKEN_TO_BE_REPLACED

David Beckham and Victoria Beckham have taken to Instagram to profess their love for each other on their 23rd wedding anniversary. END_OF_DOCUMENT_TOKEN_TO_BE_REPLACED

Chris Brown has said the public is only interested in negative news about him but go silent when he drops an album. END_OF_DOCUMENT_TOKEN_TO_BE_REPLACED