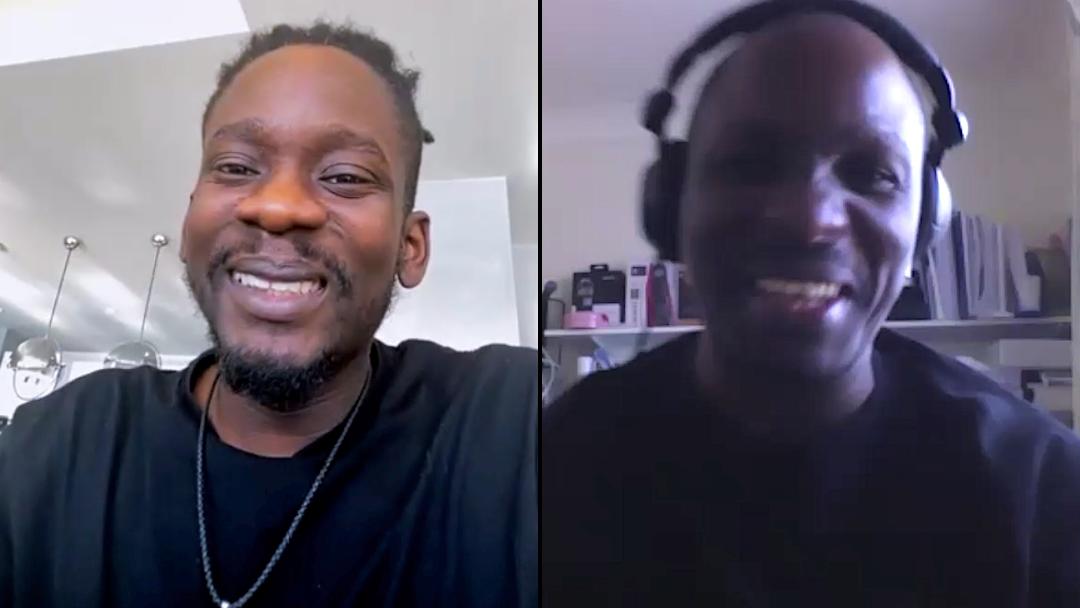 DJ Edu compares notes with Mr Eazi on Covid-19. Yes, indeed, this virus gets everywhere. They have both just recovered from an illness which looked and felt like the coronavirus, but since they are in the UK, they haven’t been able to get tested. What role did music play in their recovery? How have Mr Eazi’s plans and those of other stars of the African music scene been affected, and how are they dealing with the situation they find themselves in?

Check out highlights from the interview courtesy BBC Africa:

Edu: What impact has it (the coronavirus outbreak) had on your plans?

Eazi has been seeing lots more people using his music, song and dance videos to make videos while in quarantine – one that went viral of a mom, her son and her husband that’s hit over 8 million views on his twitter.

Eazi: ‘I’ve never had anything go that viral on my twitter before…so, in this time it’s beautiful that the music can bring so much happiness. The reaction from people around the world, seeing the families just indoors and dancing to my music, I just think that’s been a miracle of this whole time’.

Edu: Have you always been this close with your family and your mom or has it brought you closer by the virus?

Have you been in touch with other musicians and other industry people, see what they’re saying and what they’re doing?

Eazi: ‘To be honest, just Joeboy, and Joeboy has just bought himself equipment and been in his studio recording, he just keeps sending me a song a day. DJ Neptune and his producer sent me two beat packs. And I was speaking to Peruzzi from Nigeria as well yesterday. We were just doing a digital play session, where he’ll play some of his new music, I’ll play some of my new music, up until 4am!’

Edu: Any message for the fans?

Eazi: ‘The same thing as I tell everyone, please stay at home, the virus is real. I see a lot of people say ‘oh the virus is not real’; the virus is very real. And there’s nothing more we can do really than our own part. My heart goes out to all the doctors who are at the first line of defence, the medical workers, the doctors, the nurses, you know, who are sacrificing and putting themselves at risk every day to take care of people who are sick, not just from the coronavirus. You know I was just speaking to my friend and saying, maybe we could do something where we could raise some funding for these health workers in our communities, so that when all this passes away, which by God’s grace it will pass away, that they have something, a token of saying ‘hey, thank you for giving one hundred percent. While we were in quarantine you were out there saving lives, here’s our thank you,’ to go on vacation or something, that’s what I’ve been trying to brainstorm about. So, it’s warm wishes to all of them. To my fans – stay indoors, wash your hands, and stay away from the older people, you know, care for them but be careful because you might not know you have the virus and you don’t want to get a lot of people sick.’

For more, head to the This is Africa programme page here. The interview will air on 28 March on BBC World Service at 19:32 GMT and is available online after broadcast.

Related Topics:Mr Eazi talks Covid-19 Pandemic on BBC This Is Africa
Up Next

On Tuesday, August 2, Netflix hosted a “See What’s Next Africa” content showcase in Lagos, Nigeria, to spotlight its increased investment in Africa’s rich storytelling history through exciting new projects in a wide range of genres and formats that will be available in 190 countries. END_OF_DOCUMENT_TOKEN_TO_BE_REPLACED

Religious fanaticism and extremism have plunged countries into chaos and conflict the world over. Countries in West Africa that have been affected include Nigeria, Burkina Faso and Mali among others. END_OF_DOCUMENT_TOKEN_TO_BE_REPLACED

The meteoric rise of the African entertainment industry into a reckoning force within the global entertainment landscape has been accentuated by MTV Base’s tireless commitment to expanding the acceptance of African music, lifestyle, and entertainment across the globe. Over the last two decades, and in recent times, it has affirmed this commitment with various innovative campaigns, the most recent of which is its Musicology series.   END_OF_DOCUMENT_TOKEN_TO_BE_REPLACED