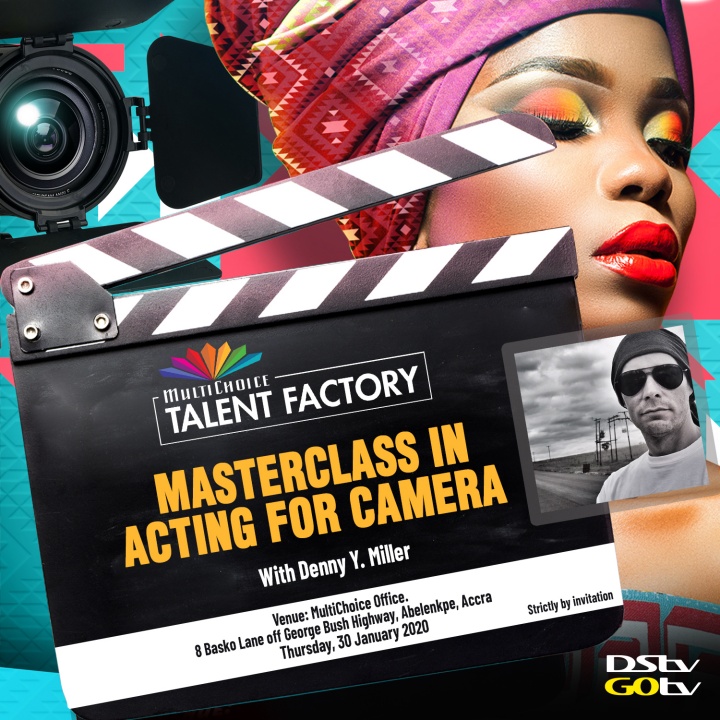 MultiChoice Talent Factory West Africa hub is set to host a Masterclass in Acting for Camera in Accra, Ghana. The one-day Masterclass which would be facilitated by international award-winning director, Denny. Y. Miller will take place in Accra, Ghana on Thursday 30th January 2020.

Explaining the rationale behind the upcoming masterclass, Femi Odugbemi, MTF Academy Director, West Africa said, Miller, who won awards for directing ISIBAYA and SWARTWATER will teach participants drawn from the film and television industry in Ghana, new techniques of acting for camera.

Miller who has been in television for over 25 years started his career in the television and film industry at the age of 19 when he worked as part of the crew in EGOLI- Place of Gold. Surrounded by notable talent in the industry and some of the best technicians, he soaked in experience that would leave him passionate about directing for television.

Miller directed season one of Africa magic’s longest soap opera TINSEL, mentoring a cast and crew that had little or no experience in the genre. He was also the creative director and director on two seasons of MOMENTS WITH MO – a Nigerian talk show and he wrote and directed Kenya’s first talent-search reality series called THE PRESENTER.

Odugbemi emphasized that the masterclass which involves actors, actresses and directors would effectively get these industry players to understand that in performance, imagery matters more than words. “These actors and directors would channel their emotions in a more powerful way when they comprehend the dynamics of acting with camera and not acting for camera” he stated.

The Academy Director, West Africa also pointed out that MultiChoice will continue to improve the skills of talent in the film and television industry in Ghana and the success of these MTF Masterclasses will, over time, deliver a more professionalized, networked film and television industry across Africa and an expanded community of highly skilled professional who are passionate about creating quality home-grown content.

The participants in the Acting for Camera masterclass will comprise of experienced plus up and coming actors and actresses from across the industry and leading professionals in Ghana.