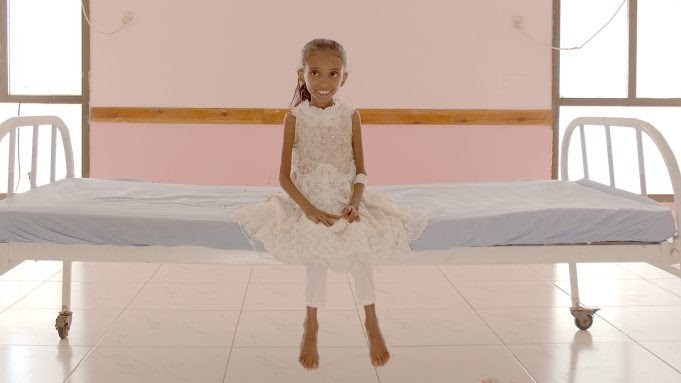 The film, directed by Oscar® nominated and Emmy® nominated director Skye Fitzgerald, documents the devastating human cost of the on-going conflict in Yemen, which disproportionately affects children. Filmed from inside two of the most active therapeutic feeding centers in Yemen, Hunger Ward chronicles healthcare workers fighting to save the lives of extremely malnourished children within a population on the brink of famine against the backdrop of a forgotten war. It is one of 10 films on the shortlist for consideration for an Academy Award®.

Hunger Ward is the third film in Fitzgerald’s trilogy on humanitarian and global refugee crises.  His film 50 Feet from Syria was shortlisted for the Academy Awards and debuted on Netflix. His film Lifeboat was nominated for the Academy Award for Best Documentary Short Subject. The third film of the trilogy, Hunger Ward, was nominated for the 2020 Critics Choice Documentary Awards for Best Short Documentary, won both Best Director and Best Editing from the 2020 Social Impact Media Awards (SIMA), and was included on the DOC NYC Short List of the best short films of 2020.

Director Skye Fitzgerald said: “I am honored that MTV Documentary Films will bring Hunger Ward’s urgent message of the humanitarian crisis affecting children of Yemen to a broad and engaged audience.”

According to Sheila Nevins: “The greatest humanitarian crisis exists in Yemen. Children are starving to death in front of America’s eyes. Filmmaker Skye Fitzgerald has made a documentary that says ‘no more.’ It is a must see for anyone with heart.”

“Skye has made a powerful and harrowing film that has the capacity to save a nation’s children from malnourishment,” said MTV Documentary Films’ Nina L. Diaz and Liza Burnett Fefferman. “We’re honored to bring this incredibly important issue to the forefront and raise awareness of this devastating humanitarian crisis.”

Focused on the plight of starving and displaced civilians at the mercy of a forgotten war in Yemen, the filmmakers utilized a nimble production paradigm to create an intimate, yet cinematic film intended to engender empathy for those most deeply impacted by the world’s greatest humanitarian crisis.

The Hunger Ward film team has partnered with the Friends Committee for National legislation, the Yemen Relief and Reconstruction Foundation and a coalition of over 200 civil society groups working tirelessly to change U.S. policy towards Yemen with screenings and discussions with policy makers in recent months.

According to PRI’s The World: “A report from United Nations agencies projects that of the country’s 30 million people, at least half will experience “worsening levels of hunger” by the middle of 2021.”

In his first major foreign policy address at the White House recently, President Joseph R. Biden focused on the war and humanitarian crisis in Yemen and announced an end to all offensive operations in the country. Paired with a second announcement that the administration intends to reverse the Foreign Terrorist Organization designation for the de facto government of Northern Yemen – significant first steps towards ending the war and saving lives are now underway.

MTV Documentary Films, whose first film St. Louis Superman was nominated for an Oscar®, has a robust slate that includes: 76 Daysset deep inside the frontlines of the pandemic in Wuhan, which was just Shortlisted for the Best Documentary Academy Awards (shortlist), Finding Yingying, Beautiful Something Left Behind, American Selfie: One Nation Shoots Itself, 17 Blocks, A Life Too Short and My Father The Mover.

Related Topics:Skye Fitzgerald
Up Next

Tiger Woods is awake and recovering from surgery after serious accident