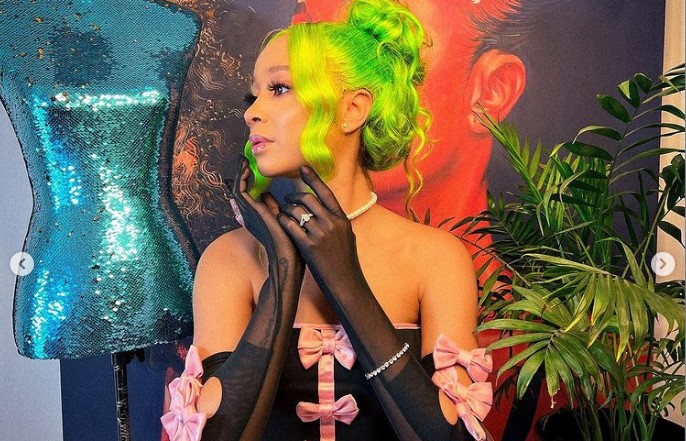 Ghanaian artist, Deborah Owusu-Bonsu known popularly as Sister Derby has revealed how she fell in love with arts and entertainment at an early age.

In an interview with AmeyawTV, the model and music video vixen recounted how her journey in the arts and entertainment and her plans for the future.

Read Also: Anne-Sophie Ave: Changing The Face Of Diplomacy Through The Power Of Personal Branding

“What I really wanted to do was be an artist but artist in the sense of painting, drawings, and doing illustrations. However, being an entertainer has been a hobby since I was 7. I never thought or planned that I would be a full-time entertainer.” she revealed.

Over the years, Sister Derby has demonstrated her professionalism and passion for her chosen field by successfully working for both small businesses and large corporations in Ghana, the United States, and the United Kingdom.

In 2012, Owusu-Bonsu recorded and released her first single, ‘Uncle Obama,’ which was covered by the United States television network CNN.

Since 2012, the brand influencer has had a short career in television presentations from ‘The Late Nite Celebrity Show’ on e.tv and GH One’s ‘Gliterrati’.

Watch the full interview above.

Related Topics:Sister Derby
Up Next

The voting portal for the 2022 edition of the All Africa Music Awards (AFRIMA) opened to the public on Sunday, 25 September at 21:00 (CAT), to decide the winners of each of the 39 award categories, globally. END_OF_DOCUMENT_TOKEN_TO_BE_REPLACED

Ghanaian actress, Yvonne Nelson has issued an apology on behalf of Ghanaians to Stephen Appiah and his Black Stars colleagues. END_OF_DOCUMENT_TOKEN_TO_BE_REPLACED

Professor Elsie A. B. Effah Kaufmann, host of the popular National Science and Maths Quiz has shared a bit of her private life. END_OF_DOCUMENT_TOKEN_TO_BE_REPLACED

As the only Ghanaian female artist to perform on the Global Citizen Festival stage at the Black Star Square last night, Gyakie did an incredible job representing the country and doing her part in being a contributing voice for global change. END_OF_DOCUMENT_TOKEN_TO_BE_REPLACED

Although Ghanaians appreciate Professor Elsie A. B. Effah Kaufmann as the Quiz Mistress of the popular National Science and Maths Quiz, there are other things that they love about her. END_OF_DOCUMENT_TOKEN_TO_BE_REPLACED