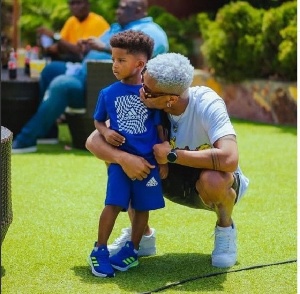 Reigning “Artiste of the Year” at the 2022 edition of the Vodafone Ghana Music Awards (VGMAs), KiDi has revealed that his son, Zane, is over the moon about his big win.

On Saturday, May 7, 2022, the “Sugar Daddy” was crowned the overall “Artiste of the Year” at the 23rd edition of the award show.

KiDi, who is still on “cloud nine” about his win, in an interview with Ameyaw TV, revealed that his son, Zane and the inspiration for his “Golden Boy” album, is absolutely proud of his achievements.

“He’s so over the moon about it. I know I already dedicated the “Golden Boy” album to him, I’m going to keep the “Golden Boy” award in his bedroom, besides his bed. I’m happy that he’s proud of me, I’m also proud of him,” KiDi said in the interview.

KiDi and his son, Zane are great daddy-son goals. Their chemistry and love for each other is always prevalent in photos and videos they have been spotted in.

General Manager of GhOne TV, Nana Aba Anamoah and Broadcaster, Serwaa Amihere have chided supporters of the New Patriotic Party (NPP) for defending the purported copy of a will of Kwadwo Owusu Afriyie, popularly known as Sir John. END_OF_DOCUMENT_TOKEN_TO_BE_REPLACED

Kourtney Kardashian and Travis Barker have got married – again. END_OF_DOCUMENT_TOKEN_TO_BE_REPLACED

Some celebrities have stood up for singer Feli Nuna following her altercation with A-Plus on United Showbiz on Saturday, May 21. END_OF_DOCUMENT_TOKEN_TO_BE_REPLACED

The Deputy Volta Regional Youth Organiser of the National Democratic Congress (NDC), Kwame Asiemoah Jr, has been named as one of the 32 young Ghanaians selected by the U.S. Department of State 2022 Mandela Washington Fellows. END_OF_DOCUMENT_TOKEN_TO_BE_REPLACED