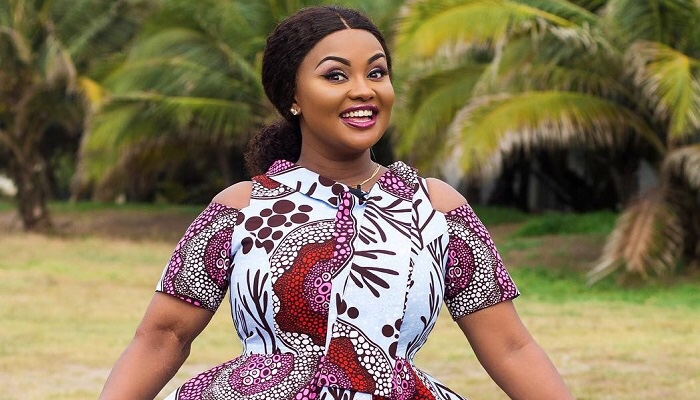 Award-winning Ghanaian actress and media personality Nana Ama McBrown has opened up about being poisoned on a movie set.

The actress made this revelation while speaking on the “Okukuseku show” an entertainment program hosted by Emelia Brobbey.

According to the mother of one, she almost lost her life after she was poisoned during a movie shoot at Nkenkansu.

Narrating her ordeal,  the versatile actress disclosed that while on break after filming several scenes, she shared her meal with a colleague on set.
She said, 30 minutes after sharing her food with her anonymous colleague, she started experiencing severe stomach pains which left  her unconscious.

According to Nana Ama, She regain consciousness after she was rushed to a nearby hospital and later moved to the Komfo Anokye teaching hospital.

Related Topics:Nana Ama McBrown
Up Next

Photos: Couple break the internet as they celebrate 15th wedding anniversary with 11 kids

It looks like it’s a ‘year of homes’ for Ghanaian celebrities and the latest glimpse comes from the beautiful home is Broadcast Journalist Serwaa Amihere. END_OF_DOCUMENT_TOKEN_TO_BE_REPLACED

Ghanaian artist Amerado has announced the release of his debut career album titled God Is Never Asleep shortened as G.I.N.A. The announcement was made in the middle of his trending beef with fellow rapper LJ. END_OF_DOCUMENT_TOKEN_TO_BE_REPLACED

Global streaming giant Spotify is proud to announce that Sio has been selected to join the EQUAL Africa programme aimed at spotlighting female artists across the continent. END_OF_DOCUMENT_TOKEN_TO_BE_REPLACED