The film was nominated for six Jury Awards. Along with the three wins in the categories of Best Romance, Best Comedy, and Best Actress in a Feature, the film was also nominated for Best Director, Best Actor and Best Feature. Several members of the cast and crew were in attendance at the event including Jamison and Powwah Uhuru, one of the co-stars and the associate producer of the film. For more information about LVBFF, visitLasVegasBlackFilmFestival.com 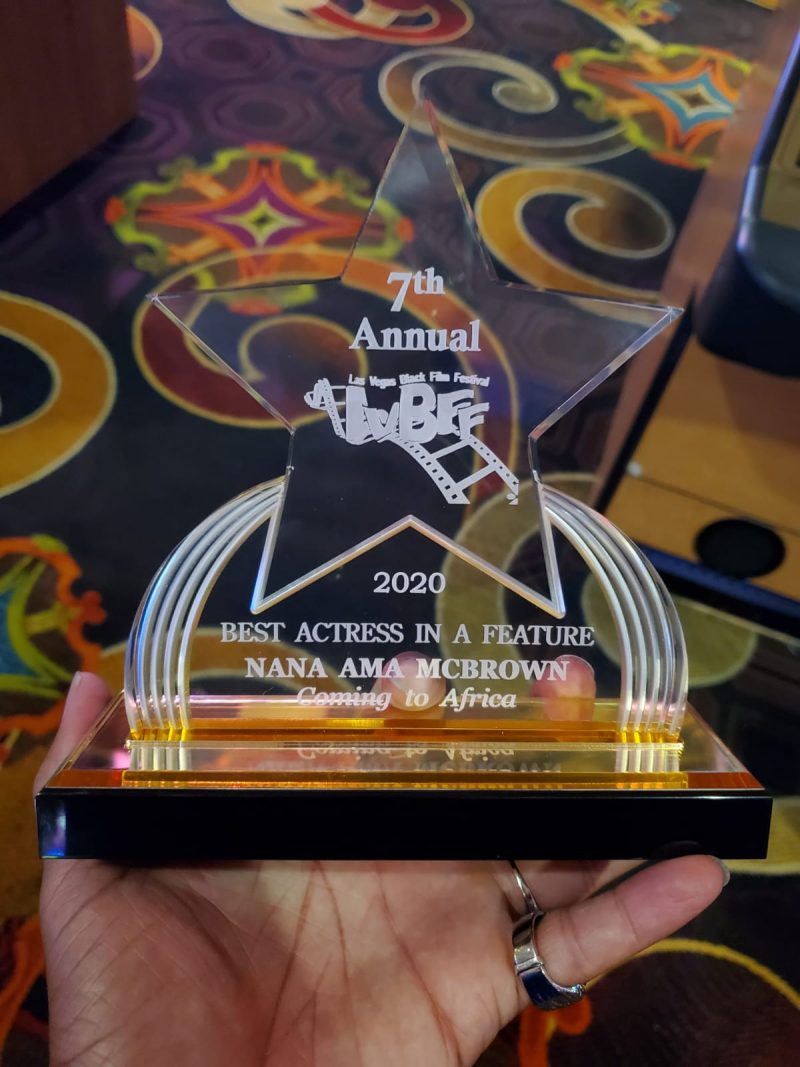 “Coming to Africa” is a romantic comedy, which explores the themes of racism, classism and social consciousness behind the backdrop of contemporary black love. The film boasts an ensemble cast, which includes Jamison, along with Khalil Kain (“Juice,” “Girlfriends”) and Ghanaian tv and film star Nana Ama McBrown (“Aloe Vera,” “Sidechic Gang”). For her role, McBrown was named Best Lead Actress in a Feature. Jamison accepted her award for her with a heartfelt message at the awards ceremony on Saturday August 8th.

In the film, Jamison portrays a Black man blinded by his personal aspirations and success; and not interested in any dialogue about the social ills of the world. Afraid to rock the boat, he’s unwilling to use his privilege and position to sound an alarm for political or social injustice. In fact, he’s adapted to his privilege culture quite comfortably, until a dose of reality and a trip to the Motherland changes his world.

Heartwarming and funny, “Coming to Africa” will transport audiences to Ghana, watch a Black man transform his heart and soul and discover his self identity – all thanks to the power of #BlackLove.

“Coming to Africa” was shot in Memphis, Tennessee and Accra, Ghana. The romcom was produced by PY Addo Boateng. Jamison served as executive producer. Mi Prime Entertainment and Hood Professor Productions served as the production companies on this project. With the plans for the theatrical release derailed by the Covid-19 pandemic, BKE Films will release the film to streaming platforms in October.

Adrian (Anwar Jamison) has spent his entire adult life, climbing the Corporate America ladder and playing the necessary games to get ahead. He’s bought into the “American Dream” – hook, line and sinker — and he’s been extremely successful in the corporate world because of it. But, he’s not the most conscious brotha! As a Black man, he’s intentionally shielded away from any talk of social justice and racial inequality or leveraged his position to help the Black community. Instead, he believes that the richer Black people become, the better off they’ll be in the struggle. That’s all that matters to him in his rise to the top.  He’s poised for a HUGE promotion on his job, making him the first African-American vice president in the history of his company.  But, racism rears its ugly head, and he gets a reality check!

On the flip side, Adrian’s brother, Buck (Khalil Kain), is a barber and social activist, who routinely holds community meetings in his barber shop. He’s fully engaged in social change and the liberation of Black people in America — that is, when he’s not cutting hair.  So too is Adrian’s other brother, Adonis (Powwah Uhuru), who’s been saving up for more than a year to celebrate his 10th wedding anniversary and gift his wife with the ultimate wedding gift – that is, a trip to Africa. After a perfect storm of disappointment and discrimination, Adrian finds himself in Ghana on an amusing adventure where he meets the beautiful Akosua (Nana Ama McBrown) and finds the nourishment he truly needs for his soul.

Anwar Jamison is a Memphis-based filmmaker, writer and professor. A child prodigy, he began kindergarten at the age of two at Sister Clara Muhammad Preparatory School in Racine, Wisconsin.  At the age of four, he attended John Robert Powers Acting School in Tulsa, Oklahoma, and was featured in several commercials. He began writing short stories at seven years of age and raps at nine, respectfully.

With his fingers in the music business, he eventually stepped away to become a filmmaker, writing and directing his first feature film in 2008, “Funeral Arrangements,” which was distributed nationally by Select-O-Hits. In 2013, he wrote and directed his sophomore effort, “5 Steps to a Conversation,” also distributed nationally by Select-O-Hits. Four years later, he released the documentary feature, “A Bitter Pill to Swallow,” tackling the epidemic of prescription pill abuse as a street drug and its effect on the users, their families and the community.

Last year, Jamison traveled to Accra, Ghana, to shoot “Coming to Africa” during the country’s Year of Return celebration. The movie is the fourth feature film that he has written, directed and executive produced.

Jamison is an English professor, who established the Digital Media & Film program in 2012 at Arkansas State University Mid-South in West Memphis, Arkansas.  He serves as lead faculty. With Jamison’s academic appointment and independent entrepreneurship, combined with his mastery of the various aspects of content creation including writing, directing, acting, producing, rapping and editing, Jamison is a multi-talented force in the entertainment industry.

GET SOCIAL WITH DIRECTOR

GET SOCIAL WITH PRODUCER

Related Topics:Coming to AfricaLas Vegas Black Film Festival
Up Next

Ghanaian singer KiDi says his new EP is on the way! END_OF_DOCUMENT_TOKEN_TO_BE_REPLACED

The media outfit which has since August 2021 gone live with carefully curated music playlists targeting Gen Z and millennials is set to officially launch somewhere in September 2022. END_OF_DOCUMENT_TOKEN_TO_BE_REPLACED

Renowned Ghanaian furniture producing company, Kings’ Furniture has been awarded for its hard work and perseverance in the Ghanaian business terrain. END_OF_DOCUMENT_TOKEN_TO_BE_REPLACED

The woman who led the “Me nsa aka ooo” TV commercial 13 years ago to promote MTN’s Mobile Money (MoMo) has been gifted a 2-bedroom house. END_OF_DOCUMENT_TOKEN_TO_BE_REPLACED

It’s difficult to predict where Stonebwoy will be in the coming days, weeks, months, or years. As a musician with a keen interest in pushing his sound to the world and etching his name in the minds of new fans, 2022 has been described as his busiest music year thus far since gaining mainstream recognition in 2012 with Pull Up—seven years after he made his official debut—the musician confirmed this via social media after his last summer show. END_OF_DOCUMENT_TOKEN_TO_BE_REPLACED