Born and raised in the national capital of Accra, the cosmopolitan city of Ghana which houses the heart of the country, radio and TV personality, Nana Kwadwo Addo  traces his roots back to a town in the Eastern Region – one of the 16 administrative regions of the country.

Coming from a region endowed with rich natural resources including forest, mineral and water resources, he would grow to become a part of the finest human resources that the region prides itself in.

But he started off as just a little boy with the dream and aspiration that he would one day conquer the world and arch his name in the annals of history. All that drove him was passion and an unmatched determination, while making use of every available resource and opportunity.

Now with a voice which stretches across the length and breadth of the country and beyond and his face on the screens of every home, the once little boy has grown and the dream he envisaged a few decades ago is beginning to fall in place. He admits he has not arrived yet but continues to count his blessings. He remains grateful for all the inroads thus far.

From his basic school days at Meadow Preparatory School at Darkuman, Accra, all through to Pope John Senior High School in the Eastern Region, up to this day when he now holds a Master’s Degree in Public Relations from the Ghana Institute of Journalism (GIJ), it’s always been one thing for him – media.

Before enrolling at GIJ for his Diploma in 2006, he had enrolled in Manifold Media School in 2005 for a semester. He describes his admission into GIJ as one of his happiest moments.

While growing up, he took inspiration from the likes of Ebenezer Ampaabeng, Kwesi Kyei Darkwa(KKD) and Tommy Annan Forson who are regarded as some the doyens in the Ghanaian media space. It would not take long for others to also look up to him and draw as much inspiration as he did at the time.

As an entertainment enthusiast, he was almost always on stage during his High School days performing to the amusement of his peers; he also ventured into music-making by recording songs with friends who would later become the nation’s top musicians – unfortunately, none of these songs saw the light of day. Nana Addo hopes to revisit this part of his life soon as he preps to release his own songs. 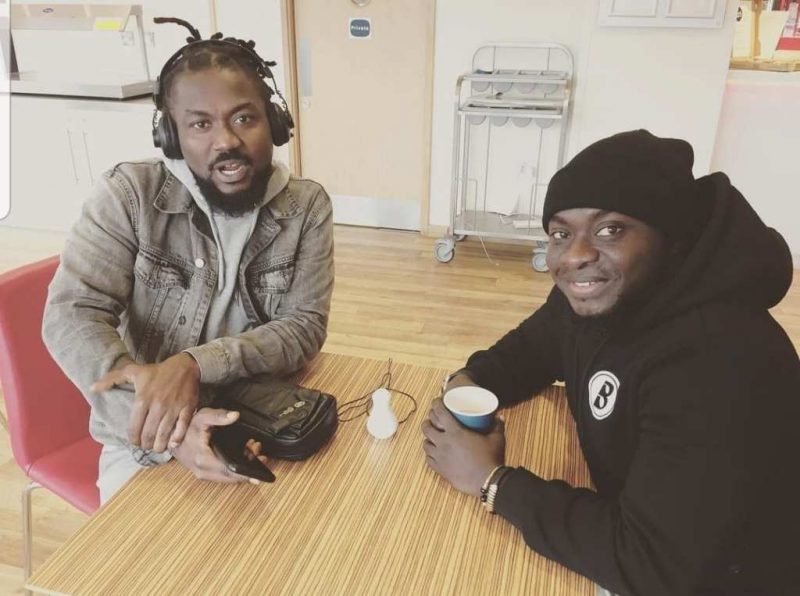 According to him, he had all the copies of 2004 Graphic Showbiz in his room due to his love for the showbiz business and his peers at the time would always run to him for “gist” in the entertainment industry. It is fair to say he was, and still is, the embodiment of showbiz among his equals.

Nana Addo could not countenance failure in the pursuit of his dreams; he rose above it when it stared him in his face and posed as an impediment to his success. For someone who had been so absorbed in entertainment during his high school days and later failed two of his papers in his final year examination, he resolved to put himself back together, sat for a re-sit to better his results before progressing to the next level – he had by this time become aware that he was not taking his studies seriously and  needed to change to complement his strides moving forward – something he said really paid off.

Exploits in the media

For his colleagues, it was just an opportunity to intern at TV Africa, one of the biggest television stations back then, but for Nana Addo it was a springboard for him to launch his long-held dream of becoming a media personality. His stay at TV Africa as an intern in 2008 did not just pass off as another internship but culminated in an employment opportunity – that was the beginning of good tidings to come.

He later that year clocked his first ever screen appearance on TV Africa as the host of a show called “TeleShop”. The first appearance opened the floodgates for the young rising star to host other shows like “Viewers choice”, “The Rundown”,  sometimes,  the morning show (Daybreak), news bulletins among others. Added to these on-screen roles, he was made Sales Executive and Events Officer, Public Relations Officer and Marketing Officer at different times during his six-year stay at TV Africa.

Having now established himself in the media landscape by dent of hard work, he took up new challenges: he moved to Angel TV from 2014 – 2016 as programs manager who doubled as host of the entertainment show – E Update.

The Akropong boy in 2016 chalked a big one with the Media General Group, arguably the biggest media conglomerate in Ghana, as Brands and Events Manager for MG Radio at the time. But before then he had done a ‘quickie’ at Pluzz FM as host of a lifestyle show known as “The Joint” on Sunday afternoons. At Media General, he rose to become the Group Head for Events, Entertainment and Lifestyle.

In addition to his managerial role, Nana Addo makes time to host Ghana’s biggest music show ‘Music Music’ and the nation’s biggest music reality show “Mentor” something he really dreamt of – dreams do come true. On 3FM 92.7MHZ, he hosts the “Throwback Music Party” every Thursday.

At this point, he is literally in every home at least twice a week but that isn’t the icebreaker; the memories he leaves and how audience and the viewer crave for weekends to come because of Nana Addo.

Nana Addo is neither single nor married; it isn’t complicated too. He draws motivation from how much impact he makes on his environment, especially when he puts smiles on the faces of others. He is one person who is always full of positive energy, all fired up for work, except when he comes under the weather.

He comes with very conspicuous traits that are easily noticeable: his appeal to the public is striking, permeated through his eloquent presentations and fashionable cute looks that hold viewers spellbound.

On radio, that voice is hard to resist, especially so when it comes in that flairy fashion, inundated with the finest entertainment gist.

He may not be a president of any Republic yet but he is definitely a ‘show boy’.

Related Topics:Nana Kwadwo Addo
Up Next

This Week’s episode features new music from Kay Faith, all the breaking hip hop news, and the hottest tracks of the week from around Africa! END_OF_DOCUMENT_TOKEN_TO_BE_REPLACED

Football fans on DStv already have the best seat in the stadium with SuperSport’s unrivalled football offering, and nowESPN (DStv ch. 218) is adding to the roster with  English Football League, Eredivisie and the Scottish Premiership returning, and the Belgian Jupiler Pro League joining the channel to  bring extra  football action from across Europe to audiences across the continent. END_OF_DOCUMENT_TOKEN_TO_BE_REPLACED

Hailed as “the best medical drama in years” by TIME, This Is Going To Hurt is now available to binge on Showmax END_OF_DOCUMENT_TOKEN_TO_BE_REPLACED

On Tuesday, August 2, Netflix hosted a “See What’s Next Africa” content showcase in Lagos, Nigeria, to spotlight its increased investment in Africa’s rich storytelling history through exciting new projects in a wide range of genres and formats that will be available in 190 countries. END_OF_DOCUMENT_TOKEN_TO_BE_REPLACED