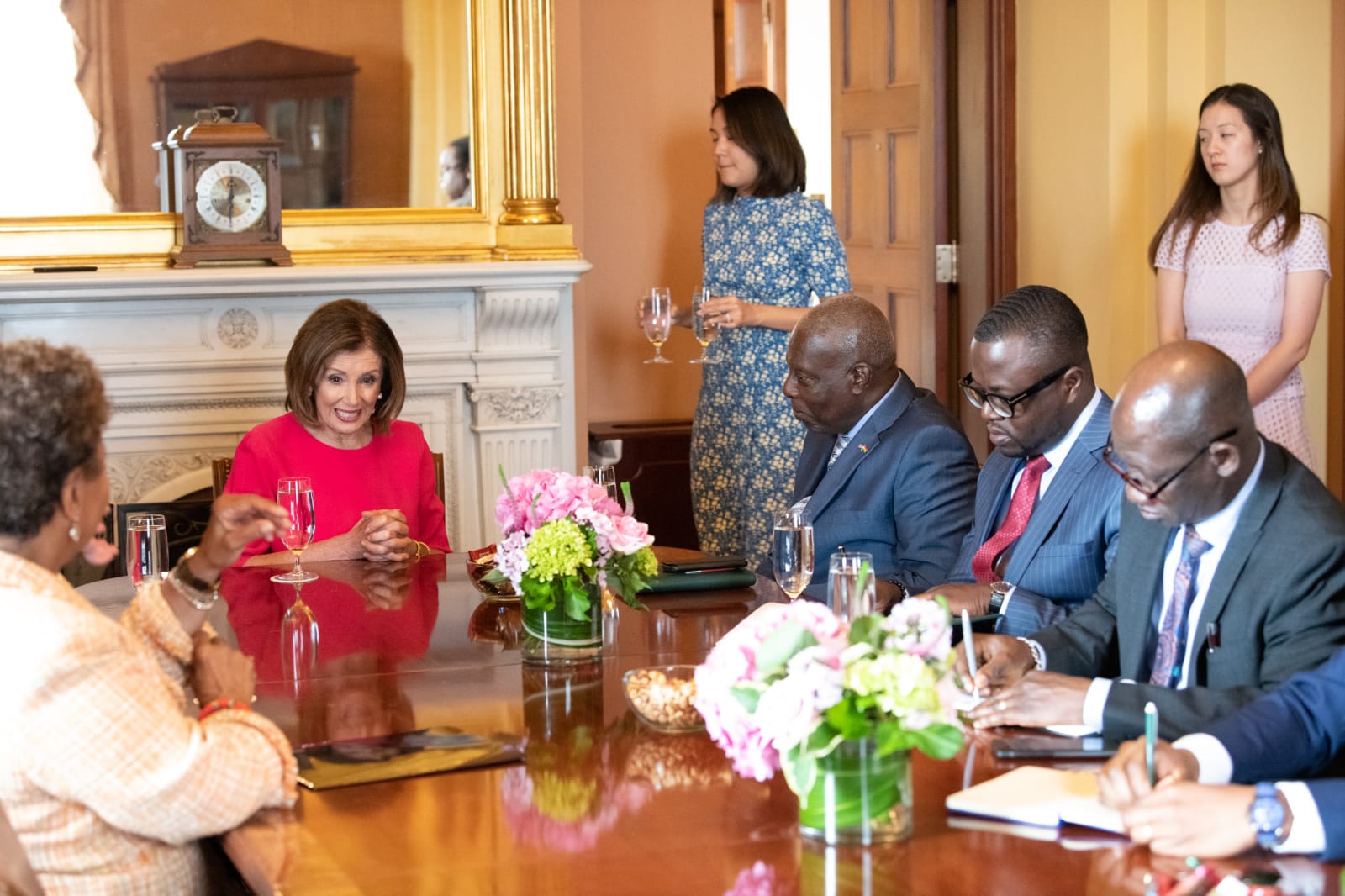 US Speaker, Nancy Pelosi is leading a Congressional delegation to Ghana to hold high-level discussions with Ghanaian President Nana Akufo-Addo, Speaker Mike Oquaye and other senior government officials, and to visit U.S. Army Africa headquarters in Italy.  Speaker Pelosi will also deliver an address to the Ghanaian Parliament.

Solemnly, the delegation will pay respects at Cape Coast and Elmina Castles and the “Door of No Return,” to observe the 400th Anniversary of the First Enslaved Africans Landing in America.

“As we face evolving global security challenges, our delegation will thank our men and women in uniform and receive briefings from U.S. military leaders at U.S. Army Africa headquarters,” Speaker Pelosi said.

“In Ghana, our delegation looks forward to high-level discussions on key issues such as regional security, sustainable and inclusive development and the challenges of tomorrow including the climate crisis,” Speaker Pelosi continued.  “It is a special honor to be the first U.S. Speaker of the House to address the illustrious Parliament of Ghana, as we build on the partnership between our nations.”

“As the founding chair of the International African American Museum, which is being built on Gadsden Wharf in Charleston, South Carolina where approximately 50 percent of enslaved Africans arrived in this country, it is particularly meaningful to me to join the first woman Speaker of the U.S. House of Representatives and many of my African American colleagues in visiting Ghana’s Door of No Return,” said Whip Clyburn.

“I consider this to be a fitting and proper way to commemorate the 400th year since the enslaved people were forced to leave their homeland and sent in bondage to the New World.  I seek to pay homage to the sacrifices of our African ancestors and honor the contributions they made to building the United States of America.”

“400 years ago this year, our ancestors were first brought to this continent in chains.  On this delegation, 12 Members of the Congressional Black Caucus will return to the African continent as Members of the United States Congress,” said Congresswoman Bass.

“We have come so far but we still have so far to go. Among the history being made this trip, I am very much also looking forward to witnessing the first woman Speaker of the United States House of Representatives address the Ghanaian parliament.  I thank Speaker Pelosi for leading this important trip and for joining us in sending a signal of mutual respect and partnership to Ghana and the continent of Africa as a whole.”

Meanwhile,Ghana’s Ambassador to the United States, Dr. Barfuor Adjei-Bawuah has paid a working visit to the Speaker of the United States House of Representatives, Nancy Pelosi ahead of her historic visit to Ghana.

The speaker extended an invitation to Ghana’s Ambassador to review key matters regarding the upcoming trip.

In his remarks, Ambassador Adjei-Bawuah touched on Ghana’s existing relationship with the United States, and the need to enhance the friendship between the two countries. “Ghana is very excited about this trip, and for us, it’s a call to open a new page to ensure a better relationship.”

R.Kelly has been removed from suicide watch after a face-off with federal authorities in the United States. END_OF_DOCUMENT_TOKEN_TO_BE_REPLACED

A multi-millionaire Russian businessman has been found shot dead at his mansion. END_OF_DOCUMENT_TOKEN_TO_BE_REPLACED

Cheryl, 61, and Quran McCain, 24, who became TikTok sensations by sharing details about their relationship with more than 2.3 million followers on just one account (@Kingqurannewpage), have revealed they are willing to spend up to £120,000 on a surrogate to have a baby together. END_OF_DOCUMENT_TOKEN_TO_BE_REPLACED

The BBC has received six complaints against disgraced DJ Tim Westwood over alleged bullying and sexual misconduct, including a historical one that was referred to the police, despite previously insisting it was unaware of any concerns about the DJ’s behaviour. END_OF_DOCUMENT_TOKEN_TO_BE_REPLACED