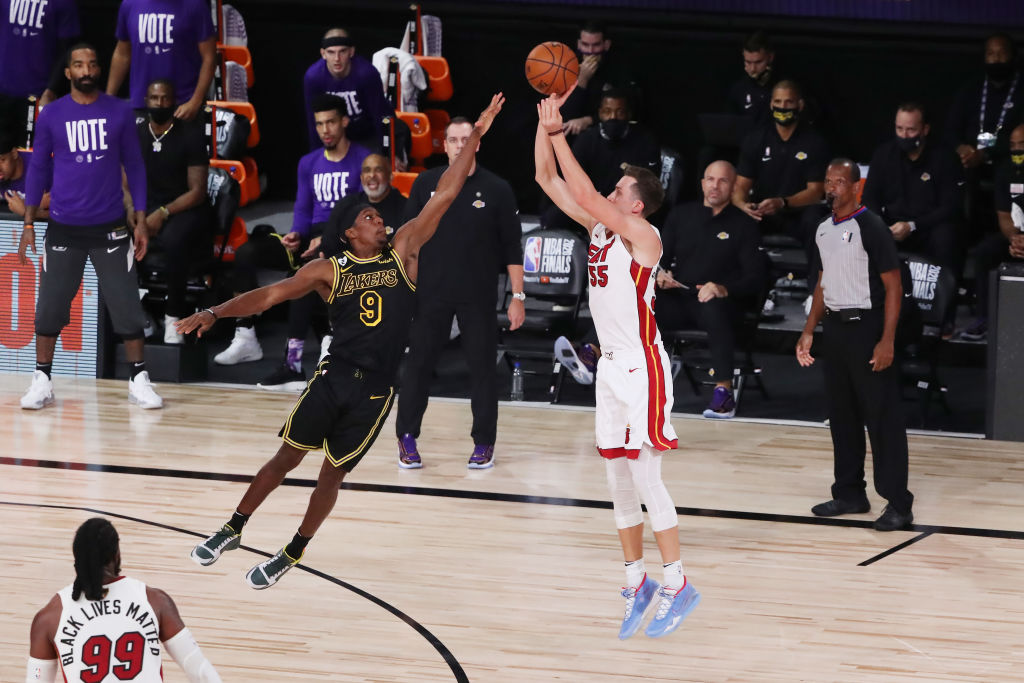 Jimmy Butler got his second triple-double in the Finals with 35 points, 12 rebounds and 11 assists, Duncan Robinson added 26 to the scoreboard and the Miami Heat defeated the Los Angeles Lakers 111-108 in Game 5. Six Heat players scored in double digits as they cut the Lakers lead to 3-2 in the best-of-seven series.

LeBron James got 40 points, 13 rebounds and seven assists while Anthony Davis added 28 points and 12 rebounds for the Lakers who will now look to close out the series on Sunday night.

“Jimmy, again, his will to win is remarkable. To do that in 47-plus minutes and take the challenge on the other end, this is — every young player coming into this league should study footage on Jimmy Butler, the definition of a two-way player competing on both end, five steals, and then making those big plays down the stretch for us offensively.”

“Nothing. I left it all out there on the floor along with my guys, and that’s how we’re going to have to play from here on out. Like I always say, it’s win or win for us. But this is the position that we’re in. We like it this way. We got two more in a row to get.”

“That’s Jimmy. He took us home. He does whatever it takes to win. He hit some shots. He made plays on both sides of the court. He willed it. It’s not always pretty, but he always finds a way. I’m just glad he’s in our locker room.”

“We just needed to get one stop. We felt like if we could get one stop, we could do something on the offensive end. But we got a hell of a look. We got a hell of a look to win the game, to win the series. Didn’t go down. And then we got the offensive rebound, we turned the ball over. I thought we had a lot more time than I think we even thought after the offensive rebound, and a pass wasn’t executed as we would like. But we’ve got to be better. We’ve just got to be better in Game 6 and close the series.”

Related Topics:NBA2020 Finals
Up Next