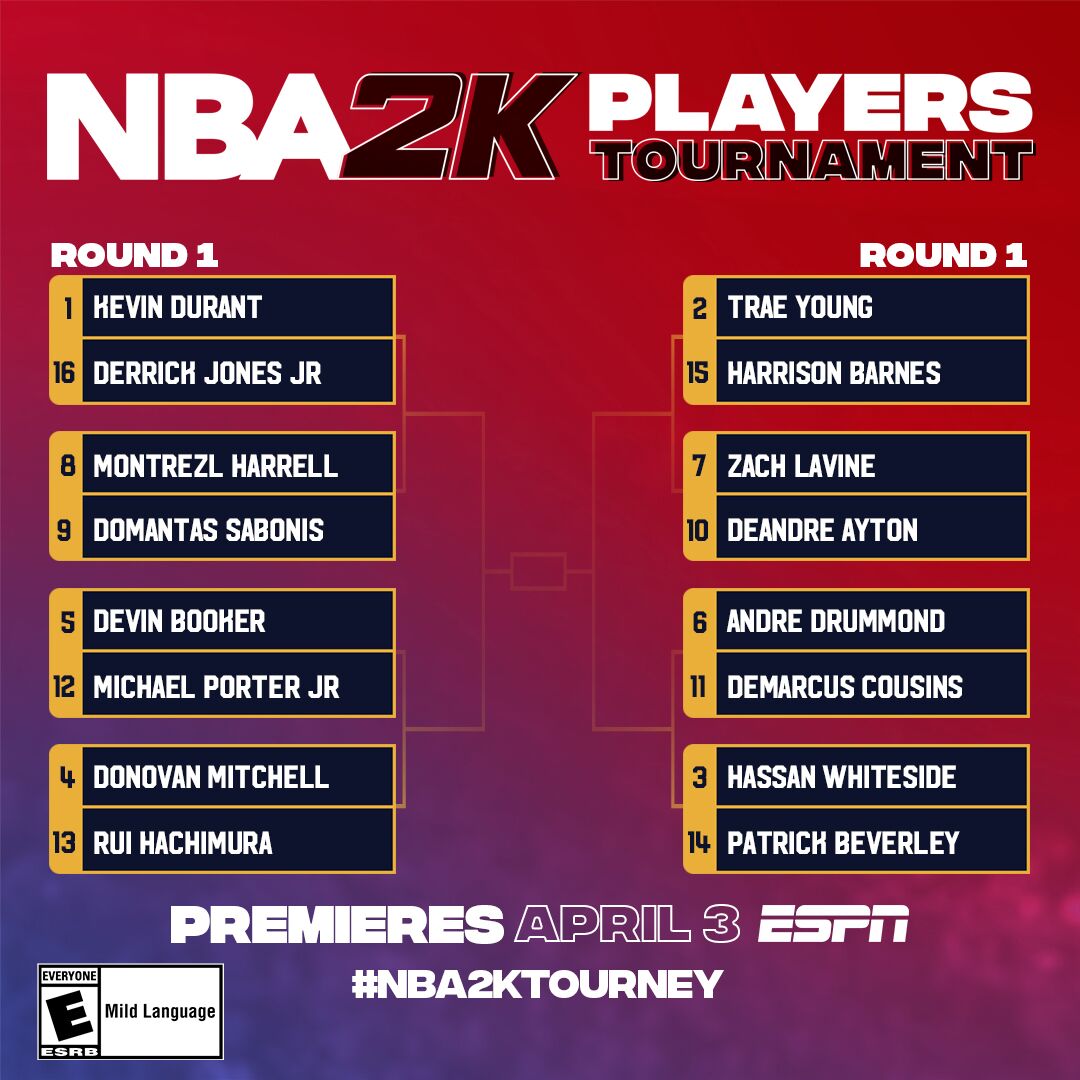 2K, the National Basketball Association (NBA), and the National Basketball Players Association (NBPA) today announced the “NBA 2K Players Tournament,” an NBA 2K20 gameplay tournament between 16 current NBA players. Beginning Friday, April 3 on ESPN and ESPN2, players – including top seeds Kevin Durant of the Brooklyn Nets and Trae Young of the Atlanta Hawks – will compete in a single- elimination, player-only tournament on Xbox One. The winner will be crowned the ultimate NBA 2K20 champion and select a charity beneficiary to receive a $100,000 donation from 2K, the NBA and the NBPA in support of ongoing coronavirus relief efforts.

“We’re thrilled to partner with the NBA and NBPA to bring basketball back to fans throughout the world and to help those in need during these uncertain times,” said Jason Argent, 2K Senior Vice President, Sports Strategy and Licensing. “Entertainment, especially sports, has the ability to bring communities together – including athletes, fans and families – and we hope that everyone will enjoy the tournament.”

“We are excited to tip off the first ‘NBA 2K Players Tournament’ in partnership with the NBPA and 2K, continuing an ongoing effort to stay connected with NBA fans around the world, while also giving back in this time of need,” said Matt Holt, NBA SVP of Global Partnerships.

“This tournament offers a unique opportunity for our players to compete with one another while also supporting their philanthropic efforts and engaging with their fans,” said Josh Goodstadt, EVP of Licensing for THINK450, the commercial arm of the NBPA. “We are excited to work with 2K and the NBA to bring this experience to life for the entire NBA community.”

Based on players’ seeding – which is determined first by NBA 2K rating, second by tenure – players will go head- to-head online in NBA 2K20. Prior to the tournament beginning, every player will choose eight of today’s NBA teams, each of which can only be used once. If a mirror match is set, the away team is awarded first choice of team. Rounds one and two will be single elimination, with the semifinals and finals running best of three.

Tournament coverage begins April 3 at 7:00 p.m. ET on ESPN, with a matchup between Jones Jr. (16) and Durant

Additional matchups will air through April 12. Every tournament game will debut on either ESPN or ESPN2, while also streaming on the ESPN App and running on NBA.com, the NBA App, and 2K and NBA social channels including Twitter (@NBA2K, @NBA), Twitch (@NBA2K, @NBA), YouTube (@NBA2K, @NBA) and Facebook (@NBA2K, @NBA). Fans can follow NBA 2K, NBA and NBPA for tune-in information, game commentary and game highlights, and they can join the conversation with #NBA2KTourney. Tune-In Schedule: Round 1

Premier League players revolt over proposed pay cuts, ask for their monies to go to charities

18-year-old North Carolina-based rapper Tino Szn has just shared his new video for “Drowning Out”, a fun and upbeat track off his most recent project Sentient. LISTEN END_OF_DOCUMENT_TOKEN_TO_BE_REPLACED

In a message for International Youth Day, His Royal Highness The Prince of Wales said: END_OF_DOCUMENT_TOKEN_TO_BE_REPLACED