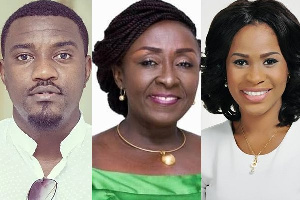 The three, all well-known faces when it comes to the movie screens, braced the storms and took huge gambles that paid off late Saturday.

Some 524 aspirants offered themselves to become Parliamentary candidates of the NDC across 157 constituencies in the country ahead of the 2020 general elections.

Mr Dumelo, a newcomer to politics, pulled a resounding 758 out of the 859 votes cast, to beat Madam Adoboe who garnered a paltry 99 votes.

After the votes were counted, the veteran actress won 586 votes with her closest contender, Fogah Nuku, polling 555 votes.

Another actress, Ebi Bright, will also represent the NDC in the Tema Central constituency after beating two other candidates.

After the polls, Bright polled 421 while Sedinam Matanawui and Carl Owuompesika polled 249 and 111 votes respectively, out of the 781 total votes cast.

Guru reveals how he bought his first car with ‘Kasiebo’, his hit collaboration of Obrafour