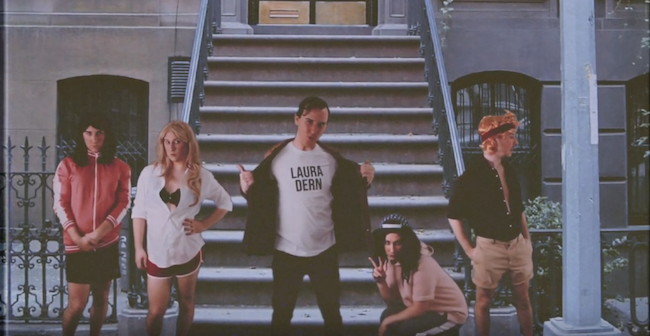 The first video from the Nasty EP, the new comedy/pop release from Brooklyn indie-comedy favorite Ian Lockwood is out! It is called (I Don’t Think This Is) The Club

The Nasty EP is the first release from comedy pop musician Ian Lockwood. On it Lockwood humorously explores classic pop themes heightened to new levels of insanity (title track Nasty asks, “what if a ‘bad girl’ were actually manipulative and murderous”) or throws a wrench in a typical pop convention (The Club is a classic club bop about never being able to actually find or identify a club).

On Nasty, catchy hooks and impressive musical production compete with hilarious punchlines and shocking twists to create an album that begs to be revisited over and over.

A Video for (I Don’t Think This Is) The Club will premiere as part of the online, streaming release show. Date and details TBA.

Ian Lockwood is a Brooklyn-based comedian and pop musician. He is the co-host of Hot Teens at the Brooklyn Comedy Collective and has had recurring appearances on the Earwolf podcast Earwolf Presents. Ian’s first studio EP, Nasty, drops on May 1st, 2020, and includes five tracks in his comedy-pop-music style that has become his signature in the Brooklyn alt scene. He is an alumni of NYU Tisch’s Experimental Theatre Wing, Second City’s Comedy Studies, UCB, and The Annoyance Theatre NY, and his shows have been covered in Time Out, Brokelyn, Brooklyn Paper, Bedford+Bowery, and more. Check out ianlockwood.info for more info – it’s a cute site!

Related Topics:Ian Lockwood
Up Next

18-year-old North Carolina-based rapper Tino Szn has just shared his new video for “Drowning Out”, a fun and upbeat track off his most recent project Sentient. LISTEN END_OF_DOCUMENT_TOKEN_TO_BE_REPLACED

In a message for International Youth Day, His Royal Highness The Prince of Wales said: END_OF_DOCUMENT_TOKEN_TO_BE_REPLACED