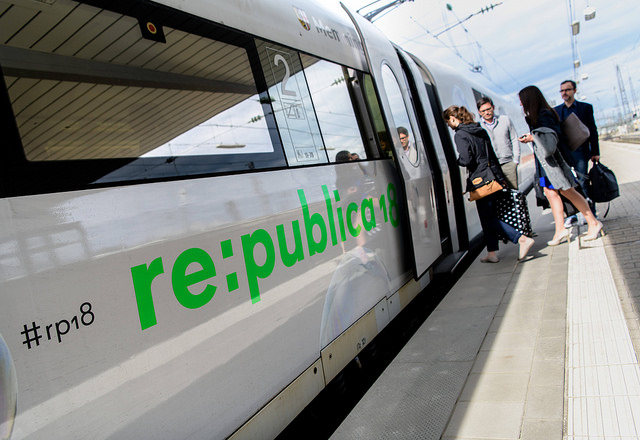 On 5 November 2018, re:publica – Europe’s largest conference on the topics of the internet and digital society – realised a programme in the United States for the first time as part of the Sequencer Tour. The worldwide community could watch the European and American speakers in LA via live streaming, including biohacker and transhumanist Rich Lee, internet political activist and journalist Markus Beckedahl (netpolitik.org) and author and human rights advocate Clemantine Wamariya. Despite the different thematic focuses, there was one thing that all 35 speakers agreed on: digitisation continues unabated yet offers immense opportunities, especially when the dialogue takes place across continents – today more than ever. “Digitisation isn’t just a topic for businesses,” says Andreas Görgen, who heads the Directorate-General for Culture and Communication at Germany’s Federal Foreign Office. “In cooperation with re:publica, societies should be invited to discuss and deal with it across international boundaries.” Germany’s leading digital, music and media platform is taking a trip to the United States with the Sequencer Tour. As part of The Year of German-American Friendship (‘Deutschlandjahr USA’) – sponsored by the Federal Foreign Office, realised by the Goethe Institute and supported by the Federation of German Industries (BDI) – the event partners, re:publica, the Reeperbahn Festival, and next media accelerator, will be realising four additional events in the United States as part of the Sequencer Tour. The kick-off in Los Angeles will be followed in 2019 by Austin in March, New York City in June, Portland later in the summer and Detroit in the fall. You can find some of the highlights of the re:publica conference programme in pictures here and in moving pictures here. Next Level! After the successful US kick-off, re:publica will be heading to West Africa later this year under the motto of NEXT LEVEL: from 14 to 15 December 2018, the re:publica Accra is taking place in Ghana at the “Round Pavilion at the Trade Fair”. The German Federal Ministry for Economic Cooperation and Development (BMZ) is the main partner of the first re:publica on the African continent. Under the topic ‘Tech for Good’, the BMZ also presents inspiring sessions in which it discusses how digital technologies with innovative solutions can contribute to mastering global challenges. One of the keynote speakers we were able to engage is author Nanjala Nyabola (including Africa’s Media Image in the 21st Century), who will be speaking about the limits of technology in her talk “What Technology Can’t Fix”. Mozilla Foundation Executive Director Mark Surman will be in dialogue with other high-profile participants on a panel about internet access. The architect and anthropologist Sénamé Koffi Agbodjinou, initiator of the platform “L’Africaine d’architecture” and founder of WoeLab, is speaking at the re:publica Accra about “Future Cities”. A multifaceted evening programme connects artistic perspectives with digital topics – and across continents at that. Presentations include the internationally renowned artist Kudzanai Chiurai from Zimbabwe and a screening of We Live in Silence with a live soundtrack by the award-winning musician M.anifest, who’s been described by The Guardian (UK) amongst others as “the foremost rapper on the continent”. Andreas Gebhard, co-founder and CEO of re:publica GmbH, says, “The re:publica is an event for digital society. It’s global and thus international! But I say that without wishing to ignore regional differences. How can we work together to shape and design the digital society when regional differences create very different framework conditions for it? Whether in Berlin, Los Angeles or Accra, re:publica creates space for dialogue and exchange between equals. I’m very pleased that we can now create these spaces on three continents.” Tickets for the re:publica Accra are available for less than 6.00 Euros/33 Ghana Cedi for both days of the conference with our partner eGotickets. You can find additional programme highlights for the re:publica Accra here.]]>