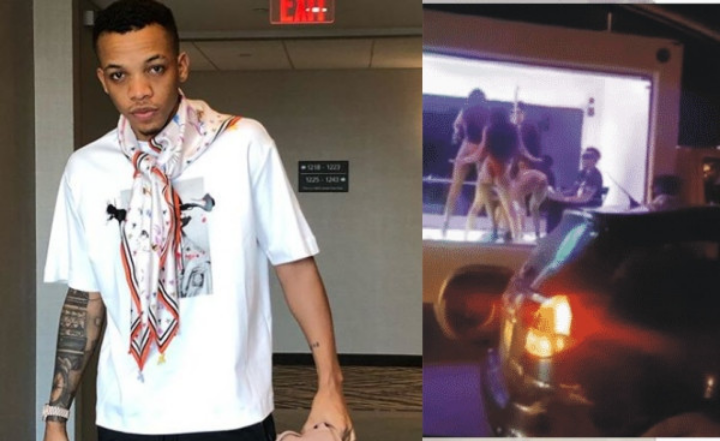 Nigerian musician, Tekno is currently at the Lagos state police command where he is being questioned by the state police CID for dancing with half-naked ladies in a transparent truck in the Lekki area of the state.

Over the weekend, videos of the singer dancing in a truck with the naked girls sparked outrage after it surfaced online.

Although the “PANA” hitmaker in a statement explained the circumstances leading to the viral video, he was invited for questioning by Nigerian police officials today.

Half-naked girls of Lekki: Tekno admits being behind the “indecent exposure,” explains why

”Tekno has been invited by the State CID in respect of those strip dancers in the truck in a public place dancing naked. So he is invited for questioning. He is in our office at the moment” Bala told LIB

When asked if he will be charged to court, Bala said he does not know for now as the command is still investigating the matter.

The act of displaying nudity in public spaces contravenes Section 136 of the Criminal Law of Lagos State, 2015 which provides that any person who commits any act of gross indecency with another person in public commits an offense and liable to a conviction to three years imprisonment in Nigeria.

Watch: 8 acts that stole the show on “East Africa’s Got Talent” first episode

Ghanaian rapper, Okyeame Kwame has opined that the new crop of rappers in the industry are far “better” than him and others who have been in the game for two decades. END_OF_DOCUMENT_TOKEN_TO_BE_REPLACED

Ghanaian rapper, Sarkodie may be gearing up to speak against the governance of the nation by the ruling New Patriotic Party (NPP). END_OF_DOCUMENT_TOKEN_TO_BE_REPLACED

Ghana’s social media has been buzzing after a video showing a young  Ghanaian in police escort to go and buy a burger went viral! END_OF_DOCUMENT_TOKEN_TO_BE_REPLACED

Broadcast Journalist at Metro TV, Bridget Otoo has come after employers who fail to pay their workers, yet live lavishly. END_OF_DOCUMENT_TOKEN_TO_BE_REPLACED