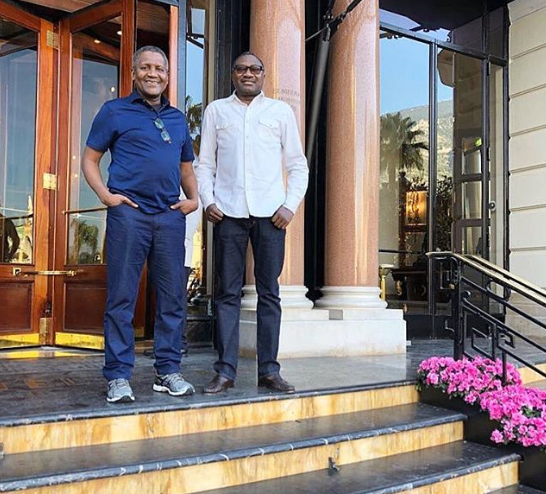 Nigerian business moguls and billionaires, Aliko Dangote and Femi Otedola have promised Super Eagles team $75,000 per goal scored during the Semi-Final match against Algeria at the 2019 African Cup of Nations tournament in Egypt.

Amaju Pinnick, President of the Nigerian Football Federation (NFF) revealed this while  meeting with the players  after the Quarter final match against South Africa  in Egypt.

Pinnick said while Africa’s richest businessman, Aliko Dangote promised $50,000 for every goal they score by the Super Eagles, Femi Otedola promised to pay $25,000 per goal during their Semi-Final match against Algeria on Sunday.

He applauded the team for demonstrating 100% patriotism.

“It is not about the monetary value, which is also very important, it is about the zeal that we have demonstrated in achieving the appreciable success we have achieved so far in the tournament.

“It is very appreciated and the entire country is thankful and good mood, everybody is happy.“

He enjoined them to continue to listen to the technical crew.

Nigeria will play Algeria on Sunday while Senegal play Tunisia at the ongoing African Cup of Nations, AFCON,  AFCON is the continent’s biggest football showpiece which kicked off last month in Egypt.