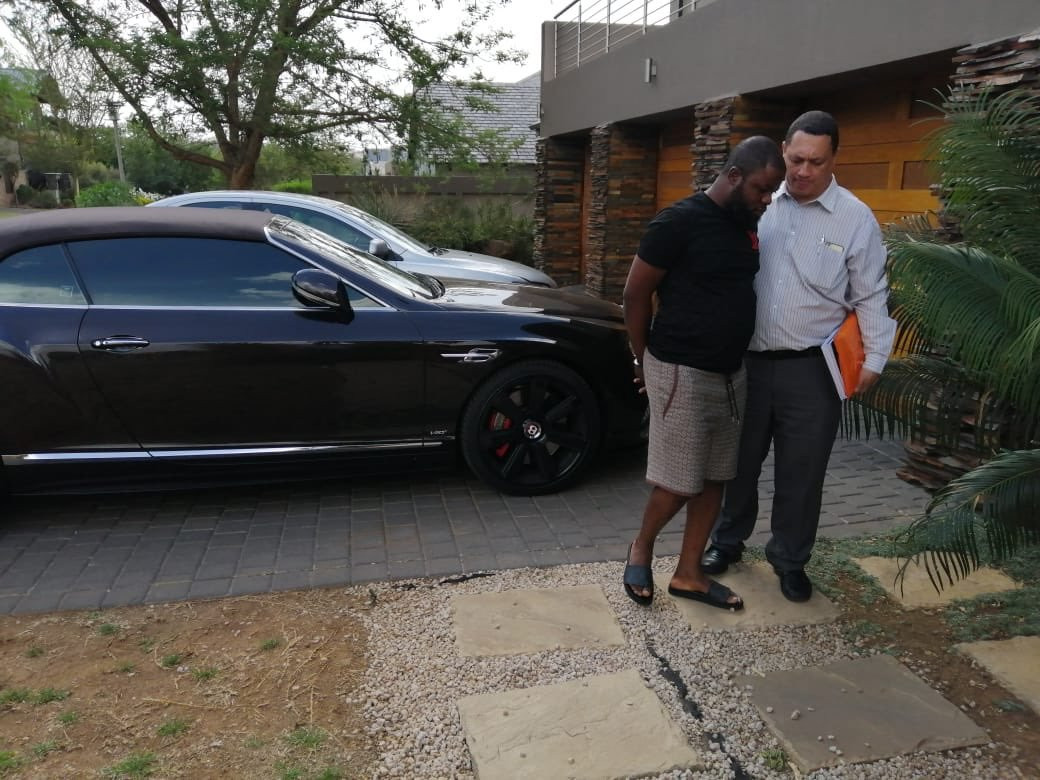 The Nigerian nationals were sentenced by the Johannesburg specialised commercial crimes court on Friday, July 8, 2022, the same day Olatunji was charged with another fraud case.

Olatunji and Adedayo Quandri were sentenced to eight and seven years’ imprisonment respectively by the court, sitting in Palm Ridge.

Olatunji was arrested in 2019 while driving his R2.7m Bentley Cabriolet with the registration number HYDRO X GP.

He scammed SA businesses out of millions of rand which he used to purchase luxury vehicles including a Mercedes-Benz and a Porsche.

Police are understood to have recovered just R700 000 in cash from the two. The cash was found in a closet at their luxury Waterfall Estate rented home, which they rented for over R55 000 per month.

According to National Prosecuting Authority spokesperson Phindi Mjonondwane, the duo cloned a law firm’s email accounts and stole over R11m from clients.

“Both men pleaded guilty and were convicted on 24 counts of theft, related to cloning the email addresses of conveyancers DM5 and Yaron Waks,” said Mjonondwane. 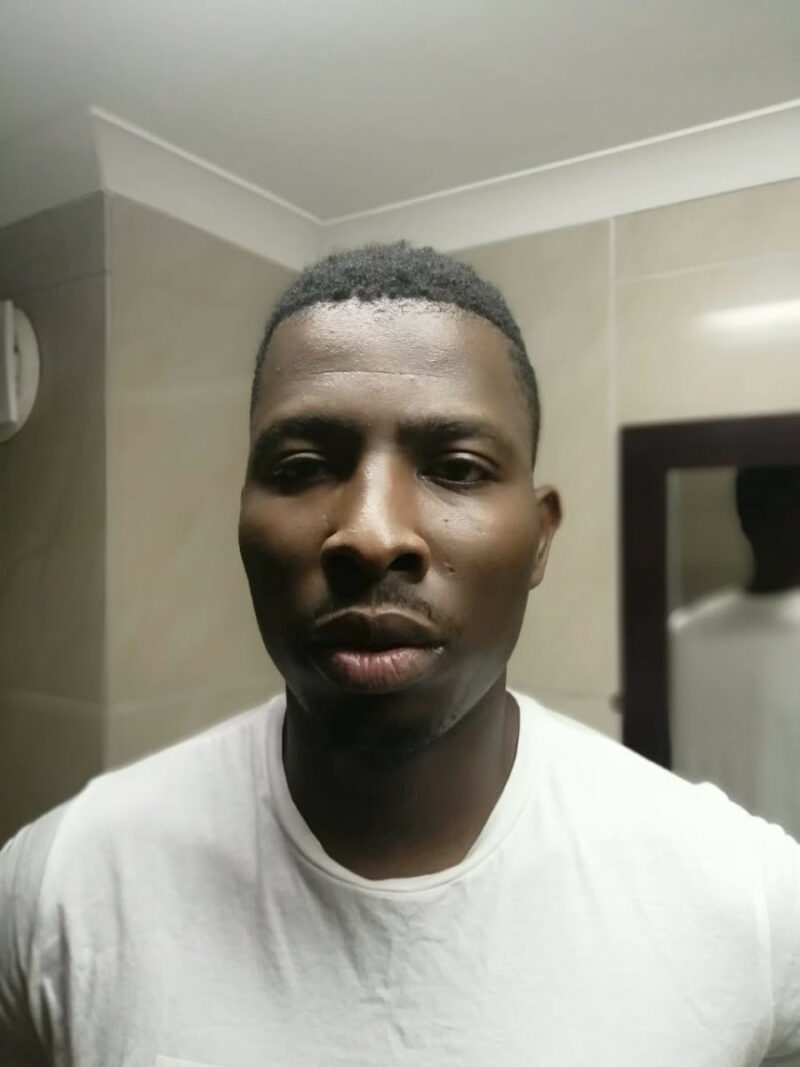 The law firms handled property sales and registrations on behalf of its clients, Amogelang Holdings and Lesley Warther respectively.

“The accused used spyware and viruses to monitor emails between the law firms and their clients (property traders) that were about to do/receive transfers from the conveyancers after their properties were sold.

“They would then send their banking details to the conveyancers, as though these emails were from the property traders, resulting in R7.8m and R4.2m being diverted to their accounts.”

“On 14 May 2019, DM5 received an e-mail purporting to be from Amohelang directing/instructing the company to transfer the proceeds of the sale of property worth R7 836 347.70 money due to Amohelang that was paid into a bank account belonging to Siphosihle Sithole, who was charged together with both accused but his trial was separated from that of the accused after he pleaded not guilty,” Mjonondwane added.

Sithole was charged with both accused but his trial was separated from theirs after he pleaded not guilty.

According to Mjonondwane, senior state advocate Frans Mhlongo argued that the victims were “rendered financially hard-pressed” and the scam was targeted at conveyancing law firms that handle large volumes of financial transactions.

“Our courts must protect members of our business community from this type of offence and failure to do so might lead to business entities disinvesting and leaving the country and a large section of our society destitute,” said Mhlongo.

Mjonondwane said Amohelang Holdings threatened liquidation proceedings against DM5 for the recovery of its proceeds of sale.

“The NPA commends investigating officer Oscar Mopedi and Adv Frans Mhlongo for remaining committed to the course of justice,” she said.

According to TimesLIVE sources close to the investigation, Olatunji was in cellphone communication with suspected scamming kingpin James Aliyu.

Aliyu was arrested in his luxury Sandton home last week by Interpol and he faces extradition to the US for scamming victims out of US$12m.

According to one source, Olatunji and Aliyu exchanged account details and the details of scamming victims with one another and that they would talk about techniques and methods of scamming their victims leading up to Olatunji’s arrest.

To all my Yahoo Boys and Black Axemen out there. Drive safe, enjoy the high life in Sandton and your luxury cars for a few more days. I'll be writing to you soon. And Abdul Olatunji, stop sending me emails from prison please. 😚 pic.twitter.com/J7MxIQv9tv

Olatunji’s nightclub was particularly popular among Black Axe members with law enforcement sources close to investigations against the Black Axe claiming that “Hydro Dollars” — a fake-currency modelled after the US dollar and used for aesthetic purposes and “money showers” featured in music videos and promotional videos — regularly being found in the homes of lower ranking alleged Black Axe members in Johannesburg during raids.

Ogbeifun was arrested on January 10 with John Ohami and Jeda Quadri following a broad daylight execution of a Nigerian man in Kempton Park and a resulting high-speed chase and deadly shoot-out with police on the R24 near the Gillooly’s interchange.

Olatunji’s troubles are just starting, however, as police charged him for fraud in relation to millions of rand stolen from another victim after court proceedings on Friday.

Watch video from his arrest below…

And here is Olatunji's arrest in 2019. Better to cry in a Bentley I guess. pic.twitter.com/1CcjAEmVFu

WATCH: Protestors in Sri Lanka cool off in the president’s pool after storming his residence

American rapper, Fish Scales is fortunate to be alive after he was shot, robbed and kidnapped outside an Atlanta brewery he co-owns. END_OF_DOCUMENT_TOKEN_TO_BE_REPLACED

19-year-old Florida rapper Smokingskul has just shared his new single and video “Nina”. Smokingskul is at the helm of a new era of plugg music known as “dark plugg”which substitutes the ethereal sounds of “plugg” with more tonal melodies that are accentuated by distorted percussion, producing a grimey, DIY sound. END_OF_DOCUMENT_TOKEN_TO_BE_REPLACED

Drake officially has more slaps than The Beatles. END_OF_DOCUMENT_TOKEN_TO_BE_REPLACED

Swizz Beatz and Timbaland have filed a lawsuit against Triller, claiming the company still owes them $28 million for the sale of their Verzuz series. END_OF_DOCUMENT_TOKEN_TO_BE_REPLACED