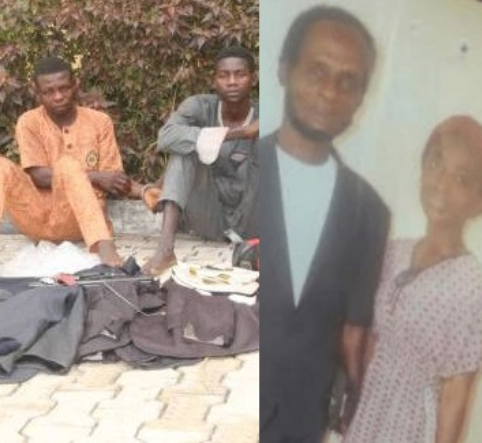 The Ondo state police command have arrested two security guards for killing their boss, 71 year old Kwakye Kwaku Richards, a Ghanaian, and his 27-year-old daughter, Kwakyw Tope, at his residence at Ojomo Akintan Estate on Ilesha/Owo expressway in Ondo State, Nigeria.Parading the suspect before newsmen, the state Commissioner of Police, Undie Adie, said the suspects, Ayuba Idris, and Taisu Abubakar, both aged 20, were initially declared wanted by the police for killing the victims and were arrested in Kano and Sokoto states, respectively.

The suspects who are of Hausa and Fulani extractions, confessed that they killed their boss and daughter and dumped their corpse in a building in their estate. Their gross was that the man refused to pay them their 3-months salaries. Items found on them include mobile phones, laptop and clothes.

“The two suspects initially said they killed the 71-years-old Richards because he refused to pay them three months’ salaries. They, however, later recanted their claim by admitting that the deceased did not owe them any salary. They also said they decided to kill the daughter on the same day in order to cover their track since she saw them the day they killed her father” the police commissioner said.

When interrogated, one of the suspects, Abubakar, blamed the influence of Tramadol and Indian Hemp, for their action.

“On that day, we took tramadol and Indian hemp and just decided to kill the man. While strangulating him, his daughter saw us, so we killed her too in order to cover up.” the suspect said

The police boss said the suspects would be arraigned in court immediately investigations have been concluded.

Chris Fonye popularly known as “Hydraulix Fonye” is a Ghanaian producer, sound engineer, songwriter and singer with a vast experience in the Ghanaian entertainment industry. END_OF_DOCUMENT_TOKEN_TO_BE_REPLACED

Although there may be hundreds of afro-beats artists in the country, Highly Spiritual Music signee, Lasmid believes he is unique. END_OF_DOCUMENT_TOKEN_TO_BE_REPLACED

Highly Spiritual Music signee, Lasmid, has stated that he wasn’t expecting his song “Friday night” to reach such great heights within a short time frame. END_OF_DOCUMENT_TOKEN_TO_BE_REPLACED

The 2023 African Cup of Nations, AFCON initially scheduled for Côte d’Ivoire next June will now be held in January and February 2024 due to the concerns over the rainy season in the country. END_OF_DOCUMENT_TOKEN_TO_BE_REPLACED