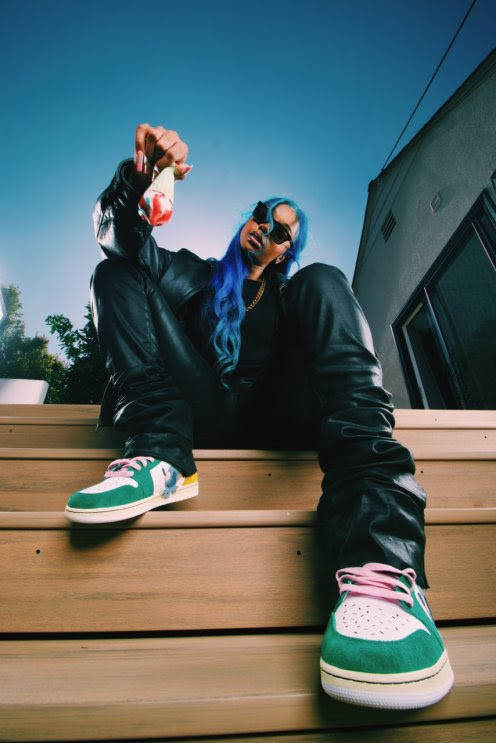 As the first release from the recently announced partnership between MixedbyAli’s No Name Recordings/Interscope records, Shady Blu releases the official music video for debut single “Jealousy.”

The California native released the single last Wednesday and follows up with a music video with a glowing summer feel that follows Shady around where she eventually ends up at a backyard pool party hanging out with friends and ignoring the jealousy around her.

Shady Blu is a master of atmosphere. Pairing gentle yet expressive vocals with nakedly vulnerable lyrics, the California singer/songwriter and rapper merges her pensive ruminations with lush ambient soundscapes to create theme songs for the aspirational and the misunderstood. Those elements swirl together on “Jealousy,” a meditative single from her forthcoming new project. Floating above spacy synths, Blu lets loose a barrage of suspicions as she diagnoses the envy of jealous friends, simulating real-time urgency with a rapid-fire delivery.

After rapping for fun at various points in high school, she recorded her first song in 2016 and started making music in earnest in 2020. Her first offering was “Dream$,” a semi-free-associative bop infused with melody and flashes of big dreams. After releasing two additional songs, she was searching for an audio engineer when she stumbled upon the Instagram account for Derek Ali—otherwise known as MixedByAli (known for his work with Kendrick Lamar, Schoolboy Q, and more).

She sent him a DM with her music; he was immediately impressed and they began a partnership. By 2021, she’d been signed to Ali’s NoName Recordings. As she prepares this new project, it won’t be long before people across the world hear her work, which will bring her attention she’s still not all that used to. “When people are praising me for my music, I get a little shy,” Blu admits. “It’s like they’re applauding a piece of my heart.”

Untrapped: The Story of Lil Baby to Stream Worldwide on Prime Video August 26

Actor-turned-musician, Frank Naro’s latest single, “I Like It” sees him experimenting with the trending ‘Amapiano’ music phenomenon. END_OF_DOCUMENT_TOKEN_TO_BE_REPLACED

Mista Myles is in with his first release of the year today, ‘Toxic Love’ – a song about what would easily pass as an intense night in the Sin City, Vegas. Stream or download ‘Toxic Love’ across all major digital platforms here: https://ffm.to/6vr4ra9 END_OF_DOCUMENT_TOKEN_TO_BE_REPLACED