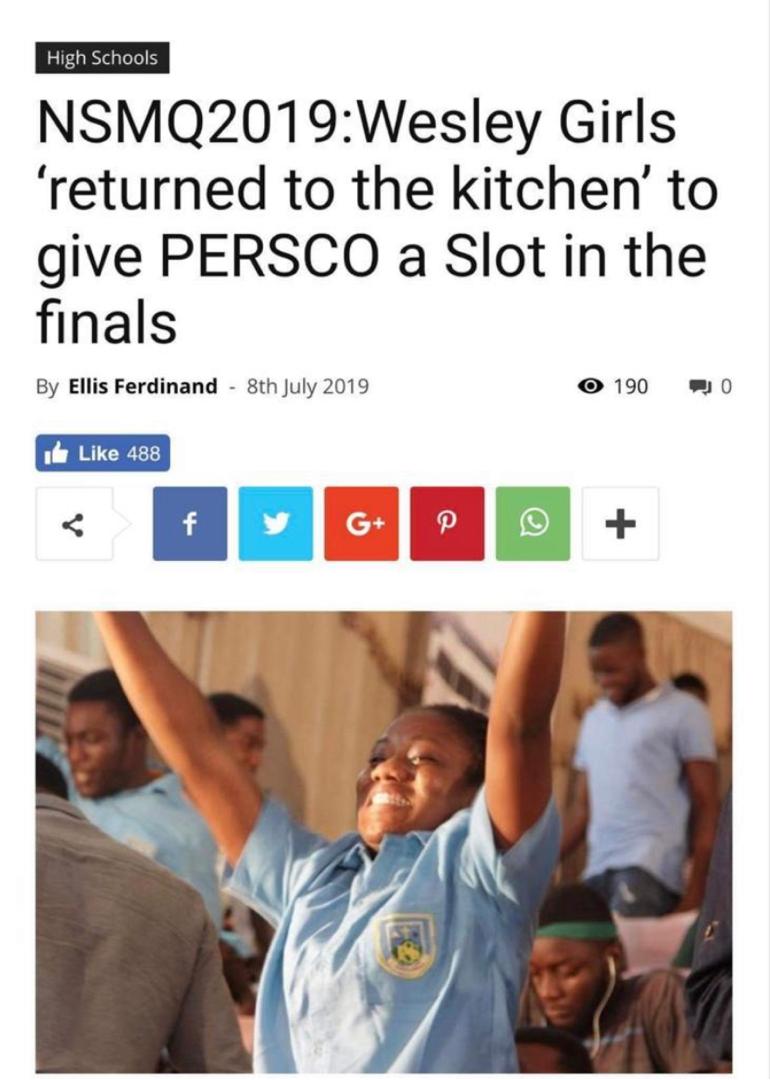 Congratulations are in order to the organizers of the National Science and Maths Quiz (NSMQ) who continue to deliver a greatly loved and relevant competition in its 26 years of existence. The benefits of the Quiz notwithstanding, there are of course arguments that can be made about how the competition has helped normalize a pre-existing problematic view in the larger society of science and maths as the epitome of intellectual success in our educational system among various other systemic issues, but that is a conversation for another day.

While the competition continues to solidify alumni bonds with their Alma Mata, the advent of social media has seen an increase in unsavoury sexist jokes that are gradually becoming normalized and associated with the competition.

Every year we see these jokes recycled, refurbished and remixed to convey deeply seated toxic gender narratives. Narratives that we work around the clock all year round to challenge, correct and change to advance the status and image of women and girls in our society. Let’s take a walk through some of the most popular memes that made the rounds during this year’s NSMQ which saw the phenomenal Wesley Girls’ Senior High School emerge to the semi-finals stage as the only surviving girls’ school in the competition.

Losing is bad but losing to women is a big insult!

When we talk about toxic narratives, we are referring to those seemingly subtle statements, expressions and expectations that weave into bigger and more pronounced situations. For instance, while losing or falling out of the competition can be a painful reality, it would appear that losing to girls’ schools is a much bigger loss. This sentiment is coming from an inherent view that society holds of women as naturally incapable, weaker and unintelligent as compared to men/boys who society deems as naturally capable, stronger, intelligent and ambitious. And even though we believe women should be educated, we subconsciously do not believe she is or can be as good as her male counterpart. We can reference common statements like, “You sat down for a girl to outrun you?”; “You let a girl beat you?”; “You sat down for the girls to overtake you?”

These statements endorse long held perceptions about the female as perpetually beneath males in all spheres of life! We may not see this directly but these mental and psychological backings do eventually affect these female competitors and go a long way to impact their performance in such competitions. It is why girls’ schools on their own, in the absence of men do exceptionally well in in not just academics, but in leadership as well.

It is not enough that science is already deemed a male subject, and so while women everywhere are having to break barriers, women in science are having to break even more of these socially and culturally constructed barriers. Why should a loss to a woman be deemed worse than a loss to a man??? What is it about women that makes us the ultimate insult!?

One other popular narrative around the NSMQ is the one that seems to suggest that because science is mainly the reserve of men, women who dare venture into science are “manly,” ugly, and not feminine enough. It is why many stay fixated on the looks of the female competitors. If they are pretty (according to societal standards) then they are an anomaly, if they are “ugly” (according to their taste) then they are ugly because they have decided to do what men do. It is why the statement “beauty with brains” needs to be rejected or at least confronted! Being attractive and being intelligent should not be mutually exclusive. At least, it isn’t for men. We don’t see a handsome man and automatically wonder if he has brains. It is about time we stopped judging women according to their looks. Attractive or not, women should be allowed to exist outside this element! The female competitors are not the only ones subject to this narrative, it is even extended to the quiz mistresses. I want to believe that the whole point of traditionally making the quiz officiators female is to challenge some of these long held perceptions about women in science and about women in general. Let’s make it matter!

Where do women really belong?

A few decades ago, there was a nationwide campaign for parents to send their girl child to school too in order to normalize the education of women. This is from the backdrop that traditionally, the kitchen remained a woman’s primary office. The kitchenby extension is the home, the domestic, birthing babies, nurturing offspring and providing emotional support to see her husband succeed in his dreams and career. This campaign appealed to our society’s senses to prioritize girl child education as much as boys so girls could also start dreaming beyond the home. We can conclude that girl child education is now normalized. What, however, remains a huge stumbling block to the full attainment of this campaign is the perceptions and expectations of society about this educated girl child. It appears we don’t know what to do with her after we’ve educated her. It appears we still have no idea what it means to fully educate a woman and witness her benefit from her education as much as her male counterparts are allowed to do. A lot of the commentary seem to suggest that these girls pursuing science and daring to enter the contest are overstepping their boundaries. And so when they lose, it is proof that they should never have even dared to compete with boys in the first place! That no matter how much school a girl goes to, her place would always be in the kitchen, in the home, BEHIND a man! 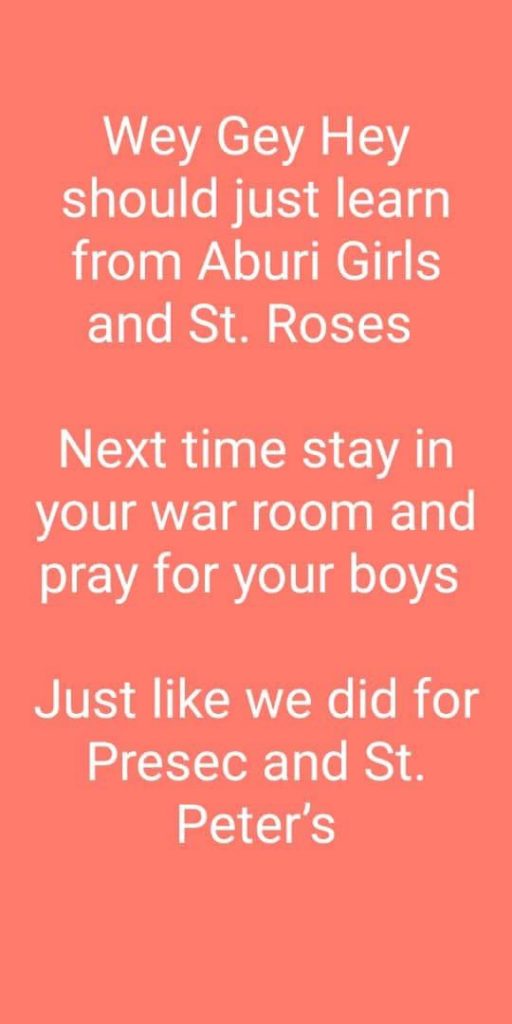 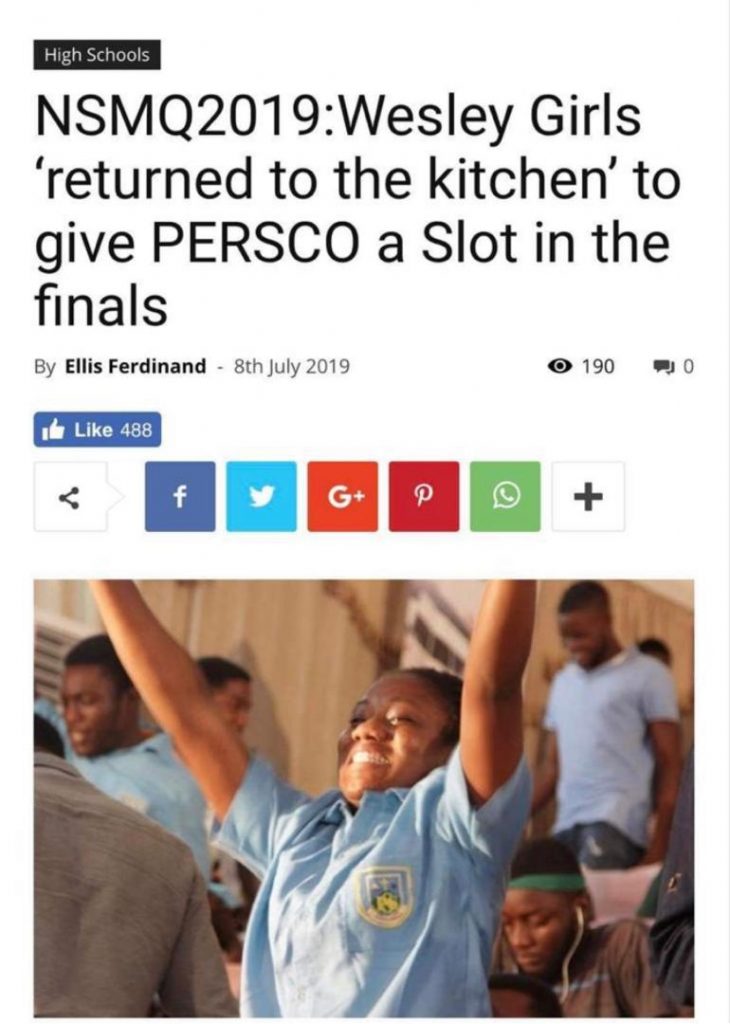 Rape as a corrective tool.

This video and the many other memes like it is what easily qualifies Ghana as a society with a rape culture. Late last year when the feminist group, Pepper Dem Ministries fearlessly tackled this phenomenon, there was a lot of backlash and denial which was very much expected. But here we are, with young male students speaking directly to their Quiz mistress in plain and explicit language how they intend to “deal” with their opponents. If the word “defilement” and “rape” can easily produce laughter and jest from majority of a society, then I am afraid we can no longer play hide-and-seek with the prevalence of sexual harassment, sexual abuse and sexual assault. Similarly, media reportage on the NSMQ have repeatedly used “rape” and sexual innuendos to describe the fate of winners and ‘losers’ in the competition. This is the extent to which rape is normalized, trivialized and in the end, ignored! We were all here when a basic school teacher for so long went away with rape jokes about his female students on his Facebook page. And even when the public rage caught on, it didn’t last long as well-meaning Ghanaians pleaded on his behalf. Why are we not raged by rape!? Is it because it happens (mostly) to women and not men?

Rape is not a joke!

What this also proves is how far back we are on sexual and reproductive education. Majority of our society still sees sex as some kind of conquest for men. No matter how mutual the act is, we will always view it as something that “men do to women” instead of something that two people engage in for their mutual pleasure; something that “devalues” women but “empowers” men; something that women should be “ashamed” of while men should “boast” about, etc. Ergo, we have empowered boys through their penises and disempowered women through their vaginas. How is it, that the only way to depict the extent a particular school outperformed another is by resorting to a denigrating act of violence that thrives on the shame and silence of women? Why do we resort to rape or rape language to show the extent to which one school has been humiliated by another? If we don’t change our approach to our conditioning and orientation around sex and seek alternate healthy and balanced narratives to young people about their sexuality we will continue to subconsciousy produce potential rapists, rape apologists and broken women. Let’s ask ourselves, why should a competition that has nothing to do with sex be riddled with sexual jokes? 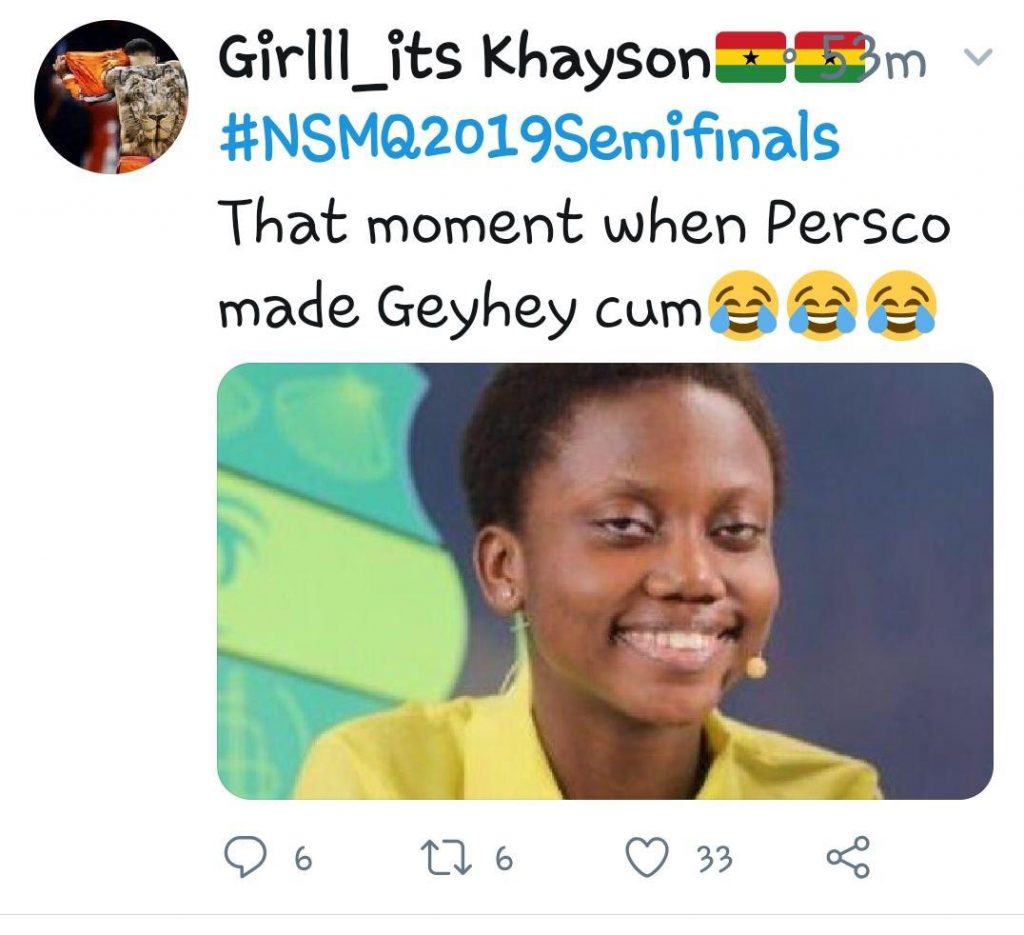 We must condemn these tasteless jokes that are gradually becoming associated with an otherwise useful competition and rid the NSMQ of narratives that are counterproductive to its core objectives.

The organizers of the competition must come out and officially dissociate from these commentaries and reportage that are denigrating to their female contestants and all women in our society! The media must also take full responsibility for the damaging headlines and recognize how far back they set the women’s rights agenda in this country.

There are physical, economic and political barriers that enable gender inequality in our society, nonetheless, it goes without saying that the mental and psychological barriers remain the biggest of all. Let’s all work together on all fronts to do our bit in fostering a more gender-sensitive society!

“Efe Plange is pursuing a PhD in Rhetoric and Writing Studies in the United States. She is also a founding member of the online social movement, Pepper Dem Ministries.