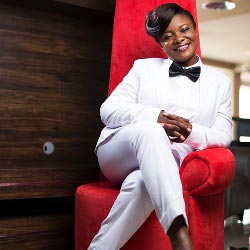 Ohemaa Mercy[/caption] Renowned Gospel Musician/Minister, Ohemaa Mercy has been honored with the key to Cincinnati, Ohio. The ceremony took place on Thursday, September 27, 2018. She was presented with the key by the mayor, John Joseph Cranley. According to Joseph Cranley, the key was given to the ‘Aseda’ hitmaker for her “humanitarian support of international and domestic advocate”. After honouring her with the key, September 27 was proclaimed as “Ohemaa Mercy Day” in the city of Cincinnati. [caption id="attachment_127737" align="alignnone" width="900"]

Ohemaa Mercy receives the key to Cincinnati[/caption] Ohemaa Mercy becomes the first Ghanaian gospel musician to receive a key in the United States of America after Sonnie Badu. She joins the likes of Okyeame Kwame who was honoured in November 2016 as the only Ghanaian entertainer to receive the key to the city of Cincinnati. Ohemaa Mercy in her speech after receiving the key, thanked God, the mayor, and the people of Cincinnati for the honour and promised to do more to help the society.]]>

Is Funny Face Getting Married Again?

Ghanaian rapper, Okyeame Kwame has opined that the new crop of rappers in the industry are far “better” than him and others who have been in the game for two decades. END_OF_DOCUMENT_TOKEN_TO_BE_REPLACED

Ghanaian rapper, Sarkodie may be gearing up to speak against the governance of the nation by the ruling New Patriotic Party (NPP). END_OF_DOCUMENT_TOKEN_TO_BE_REPLACED

Ghana’s social media has been buzzing after a video showing a young  Ghanaian in police escort to go and buy a burger went viral! END_OF_DOCUMENT_TOKEN_TO_BE_REPLACED

Broadcast Journalist at Metro TV, Bridget Otoo has come after employers who fail to pay their workers, yet live lavishly. END_OF_DOCUMENT_TOKEN_TO_BE_REPLACED