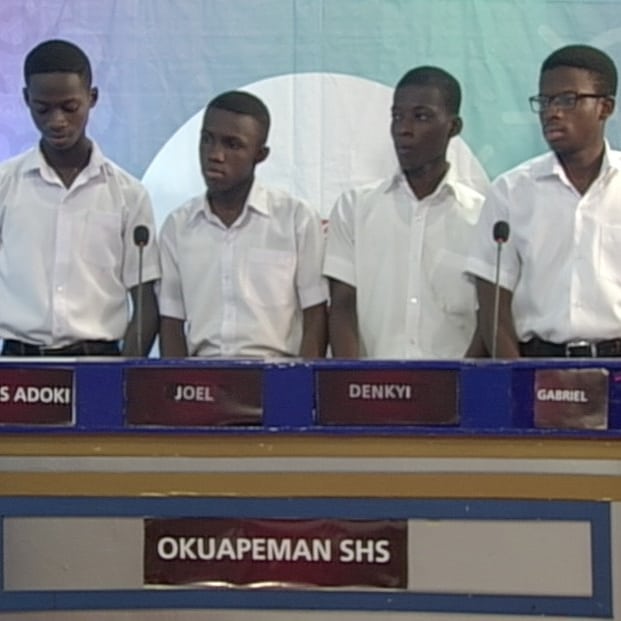 The excitement at The Sharks Quiz has turned up a notch since the onset of the knockout stages. In the previous weekend Mawuli School pipped Pope John Senior High in a contest which was determined by the very last question. 65-55 points it ended in favor of Mawuli School.

It was the turn of Okuapemann School and T. I Amass this past weekend. These two schools had during the preliminaries showed promise scoring 90 and 60 points to qualify among twenty two schools. No one could predict which school had the upper hand and the schools lived up to the billing.

Okuapemann School started the stronger side in the first round – Right Corner Round, where questions focus on students’ appreciation of General Knowledge on Ghana and Africa.

T. I Amass gathered momentum in the second round – R cubed round (Reading, wRiting and aRithmetic) and the STEM round, closing the gap to fifteen points. In the end, it was the One on One round where students are paired individually against each other where Okuapemann School cemented their victory. The final scores, Okuapemann School:100 – T. I Amass:85.

Okuapemann School will move on to meet Mawuli School at the quarterfinal. At the Juniors level, Burma Camp JHS defeated St. Kizito JHS in another pulsating contest.

Next Saturday, former finalist St. Thomas Aquinas will meet St. Peters Senior High in what is expected to be a thriller. Do make a date every Saturday from 2.30pm on tv3 or DSTV channel 279.