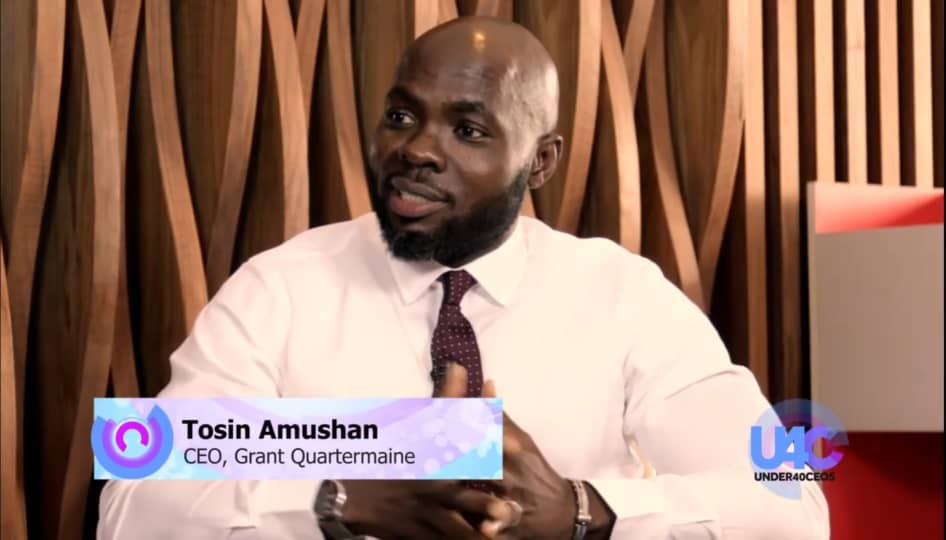 Tosin Amushan attended St. Jude private school in Festac Town and subsequently Government College Lagos. He would later bag his degree in Political Science from the University of Lagos in the year 2000.

He was born to a father who was an Insurance professional, and his mother, a professional nurse with a major in psychiatry.
A young, versatile and dogged executive, Tosin would later find his calling by mere happenstance and today he is the CEO of one of West Africa’s largest furniture manufacturing companies – Grant Quartermaine.
Watch the full episode on Under 40 CEOs below:

About Under 40 CEOs on Television
The acclaimed television show Under 40 CEOs launched on TVC Entertainment and TVC News on the 9th of October, 2015 and subsequently launched on Silverbird Television Network on the 13th of January, 2016 and has spotlighted inspiring young business leaders aged 40 and under from East, West and South Africa. In addition to the channels above, the series has also aired on or currently running on Africa Magic Family, DBS, ITV Benin, ITV Abuja, RSTV and GHOne reaching a cumulative average viewership of 2.2million people every week.

Under 40 CEOs seeks to research, celebrate and expose the business leaders of the not-so-distant future and tell the stories of these young business leaders in Africa with a focus on the journey, the process and their proposed destination.
With over 100 episodes recorded till date, and serial entrepreneur, Familusi Akin Babajide, Mr FAB as the host, Under 40 CEOs has since gone on to inspire and motivate millions of would-be young business leaders across Africa to take action and join in the rebuilding and re-shaping of the African continent.