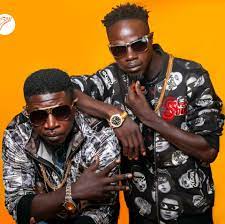 Veteran Ghanaian musicians Prince Kwabena Budu and Ebenezer Kwasi Okyere known in the music industry as Akatakyie, have revealed that although their music was popular in the country, they failed to make any monetary gains from it.

According to the music duo, their management failed woefully to monetise their music, hence, leaving them with nothing to show for it.

They made this revelation during an interview with Ohemaa Woyege on Angel FM’s Y’adwumanie show.

“We didn’t acquire enough money to construct a house out of music, but when we tell people, they don’t believe us because our music is popular…and this was due to our terrible management, therefore we are now our own managers,” they revealed.

The music duo, Akatakyie is made up of two brothers, Prince Kwabena Budu Asumaning (Kobby Culture) and Ebenezer Kwasi Okyere Asumaning (King Pharoah). They released their maiden album “Odo Esisi me” in 1999.

They have five albums to their credit.

According to Margaret Andega, a Kenyan entrepreneur in Atlanta, she was the driving force behind the commercialization of Shea Butter in the US during the late 90s. END_OF_DOCUMENT_TOKEN_TO_BE_REPLACED

Nigerian hip-hop artiste, Eedris Abdulkareem has disclosed that he is battling kidney failure and will have a surgical operation at the end of July. END_OF_DOCUMENT_TOKEN_TO_BE_REPLACED

According to reports from Nigeria, unidentified gunmen have attacked an ‘advance team’ of President Buhari’s presidential aides leading to injuries to two people. END_OF_DOCUMENT_TOKEN_TO_BE_REPLACED

Sensational highlife/afrobeat artist KiDi has said that his dream is to collaborate with Daddy Lumba on a song. END_OF_DOCUMENT_TOKEN_TO_BE_REPLACED

Award winning South African actor, Sthembiso ‘SK’ Khoza has once again become a trending topic on social media after a snippet from his sex tape – which shows him performing oral sex on an unknown woman – went viral. END_OF_DOCUMENT_TOKEN_TO_BE_REPLACED

It is no secret that “HipLife” Grandpapa, Reggie Rockstone is the pioneer of the genre in Ghana. END_OF_DOCUMENT_TOKEN_TO_BE_REPLACED