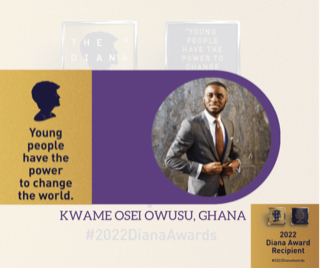 Kwame Osei Owusu, a young man from Kumasi in the Ashanti Region, has been recognised with the highest accolade a young person can achieve for social action or humanitarian efforts – The Diana Award.

Kwame, who currently lives in Enfield, London in the United Kingdom was honoured with’ The Diana Award’ for going above and beyond in his daily life to create and sustain positive change.

‘The Diana Award’  established in memory of Diana, Princess of Wales, is given out by the charity of the same name and has the support of both her sons, The Duke of Cambridge and The Duke of Sussex.

Kwame is a trainee pharmacist and social activist who has been recognised for his works in mental health advocacy using his social media platform and talks at online conferences.

He was also a frontline healthcare worker who continued to serve his community throughout the pandemic. Through his advocacy work, he shares his personal experience with depression and the measures he has been taking to maintain a positive mental health after his recovery.

His tenure as the chairman of the Enfield Youth Parliament in 2013 enabled him to champion for positive causes later when he was elected as the President of the Afro-Caribbean Society (ACS) at his university.

In a speech,  Tessy Ojo CBE, C.E.O of The Diana Award stated;

“We warmly congratulate our new Diana Award recipients from the UK and across the world who are changemakers for their generation. It is especially poignant as we remember Princess Diana twenty-five years on. We know by receiving this honour they will inspire more young people to get involved in their communities and begin their own journey as active citizens.”

About The Diana Award:

The charity fosters, develops and inspires positive change in the lives of young people through four key programmes which include; a mentoring programme for young people at risk, a youth-led anti-bullying ambassadors campaign, a collaborative Changemakers programme that aims to reimagine mental health support for young people from racialised communities and a prestigious award which publicly recognises young changemakers – The Diana Award.

You can reach Kwame on the following:

Kwaw Kese reveals ‘attacks’ on Sark was to get his attention

Calista Amoateng, 16, has arrived in Ghana after winning the 2022 Miss Teen Tourism World pageant in the Philippines. END_OF_DOCUMENT_TOKEN_TO_BE_REPLACED

Ghanaian actor, Eddie Nartey has bemoaned the current high cost of living in the country. END_OF_DOCUMENT_TOKEN_TO_BE_REPLACED

Self-acclaimed “King of Dancehall” Shatta Wale has hit a major milestone in his music career. END_OF_DOCUMENT_TOKEN_TO_BE_REPLACED

Despite a nasty end to their engagement, Nigerian Afro-beats superstar, Davido and his ex-fiancé and baby mama, Chioma still have a great relationship. END_OF_DOCUMENT_TOKEN_TO_BE_REPLACED

Nigerian superstar, TuFace Idibia has publicly apologised to his wife, Annie Idibia for constantly causing her and his family pain. END_OF_DOCUMENT_TOKEN_TO_BE_REPLACED