Gospel musician Patience Nyarko has reacted to claims made by Abeiku Santana that she has a demonic agenda against fellow musician Joe Mettle.

Abeiku Santana on his show on Okay FM, Tuesday, May 26, accused Patience Nyarko of allowing the devil to use her due to her attempt to discredit fellow gospel musician Joe Mettle.

“Patience Nyarko has allowed the devil to use her against Joe Mettle,” he said. “Have you seen a lion eating lion before? How can a Christian attack fellow Christian?”

Abeiku added that the demonic agenda against Joe Mettle will not survive.

“This is purely a demonic spirit against minister Joe Mettle but it will not survive. That demonic agenda against Joe Mettle will not wash in this country.”

Less than 24hrs after Abeiku’s remarks, Patience has responded with a written open letter to the ‘Ekwanso DwooDwoo’ host.

In the letter, the singer expressed her disappointment with the insinuations cast on her personality by Abeiku and “sincerely forgave” him.

Read the full statement below. 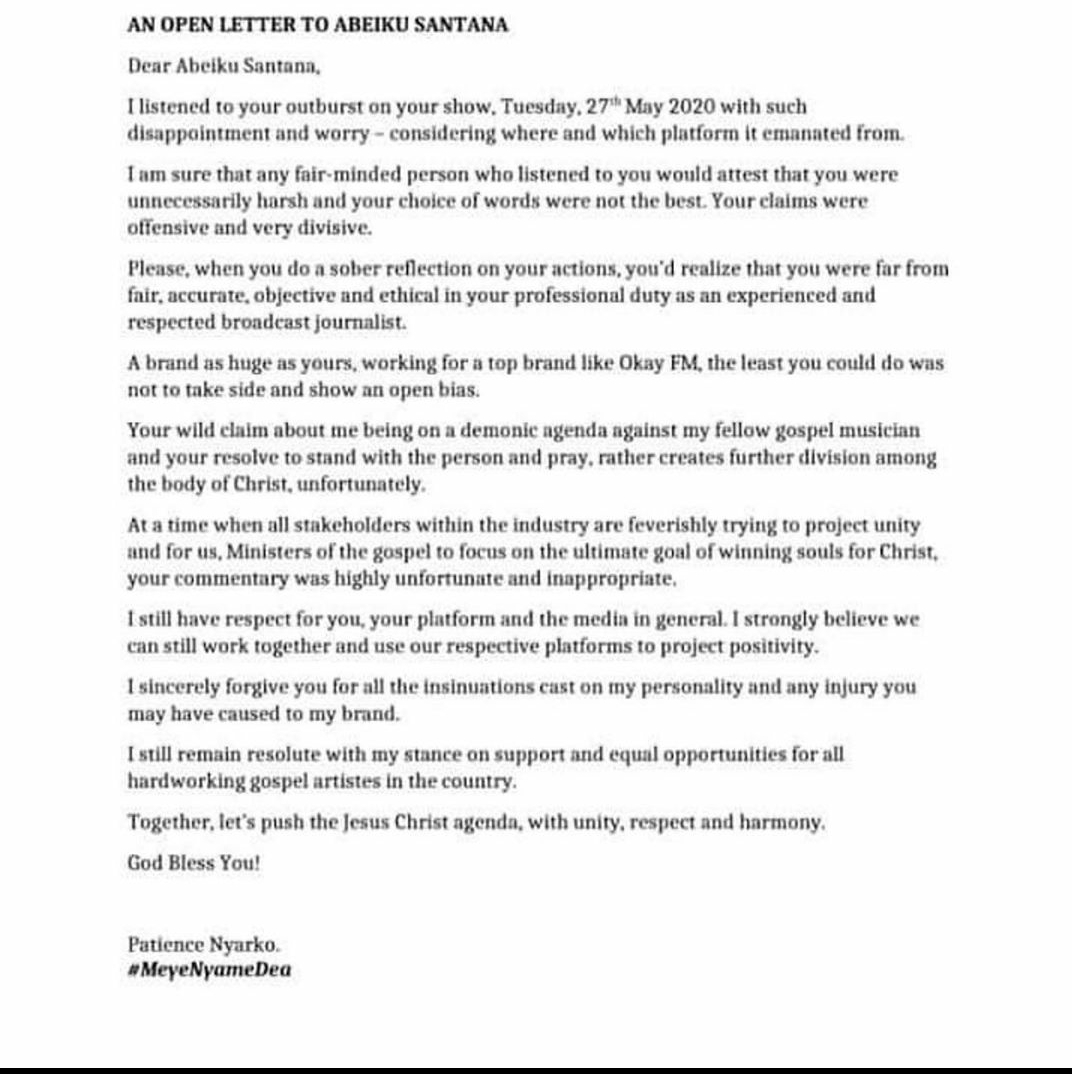 The “Wafom Kwan” hitmaker has been at the wrong side of social media users and gospel music lovers after she went on radio to insinuate that Joe Mettle isn’t the reigning gospel musician in Ghana and doesn’t deserve the hype he gets.

She also walked out of an interview when questions about her Joe Mettle comment was raised.

Watch: My ex-manager/fiance lied, I never signed any contract with him- Eshun

Award-winning rapper, Sarkodie has responded to all the criticism he has faced ever since his feature on Bob Marley & The Wailer’s classic, “Stir It Up” was released. END_OF_DOCUMENT_TOKEN_TO_BE_REPLACED

Ghanaian singer, Efya has caused quite a stir on social media after revealing that she doesn’t know who popular Reggae artiste and Radio Host, Blakk Rasta is. END_OF_DOCUMENT_TOKEN_TO_BE_REPLACED

Ghanaian singer, Efya has reacted to Blakk Rasta’s comments about Sarkodie’s feature on the Bob Marley & The Wailer’s classic, “Stir It Up.” END_OF_DOCUMENT_TOKEN_TO_BE_REPLACED

Award winning Ghana musician who doubles as a physician specialist has stated in a recent interview on Asaase Radio that, the division of fans is rather killing the Ghanaian music industry than helping in building it. END_OF_DOCUMENT_TOKEN_TO_BE_REPLACED

American rapper, Tobechukwu Dubem, better known as Tobe Nwigwe has expressed his admiration for some Ghanaian musicians with whom he would like to collaborate. END_OF_DOCUMENT_TOKEN_TO_BE_REPLACED

Ghanaian Reggae and Dancehall artist, Stonebwoy has revisited the clash he had with Shatta Wale at the 2019 Vodafone Ghana Music Awards. END_OF_DOCUMENT_TOKEN_TO_BE_REPLACED