Some members of popular feminist group in Ghana, “Pepper Dem Ministries”, have called out ace-broadcaster Nana Aba Anamoah over recent comments she made about taking up traditional roles at home.

At the “Sisterhood” event organised by Sandra Ankobiah on her birthday, May 18, Nana Aba Anamoah during the mentoring session, mentioned that she has never been tempted to take up traditional roles.

“I’ve never been tempted to fall back into the traditional role, I don’t even  like cooking, so it won’t work for me,” she told one of the girls who had asked the question.

Videos from the event made it to social media and some members of the “Pepper Dem Ministries”, pointed out the contradiction from an interview Nana Aba granted in the year 2018.

The interview, granted by Nana Aba to Joy FM was at the time when another group, “SugarDem Ministries” which she subscribed to, sprung up to oppose the strong feminist views propagated by the “Pepper Dem Ministries.”

“It is unacceptable to think that cooking for your man makes you a slave. I cook for my boyfriend and will never stop cooking for him. I don’t understand why there should be a fight between men and women. We all have our roles to play. If I need a new car, I’m not going to use my money to buy it. I won’t use my money to buy clothes. My husband must buy it for me,” Nana had reportedly stated in the interview. 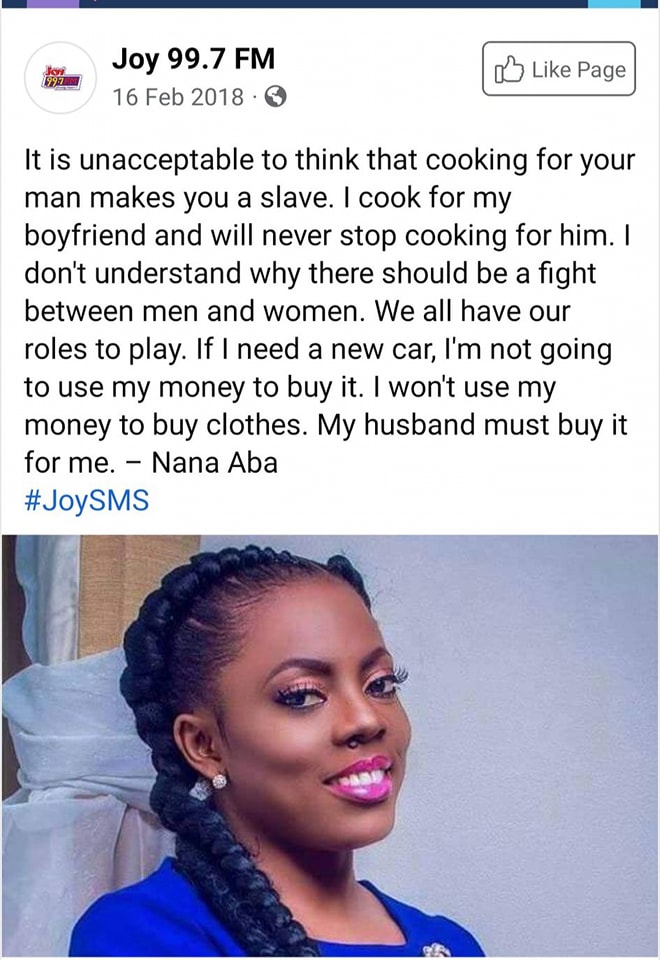 Members of Pepper Dem ministries have since welcomed Nana Aba to what they refer to as the “bitter side” since she has now publicly declared that traditional roles such as cooking, as spearheaded by the “Sugar Dem Ministries” were not for her.

Another member by the name Efe Plange wrote;

Other members have equally shared their opinion on the matter in various posts all over social media.

Bose Ogulu has told her son Burna Boy to “tone down the madness” as she celebrated his birthday. END_OF_DOCUMENT_TOKEN_TO_BE_REPLACED

The Hewale Lala (Song Of strength) hit maker Perez Musik gets ready to have his first-ever major concert. END_OF_DOCUMENT_TOKEN_TO_BE_REPLACED

Kofi Sonny, CEO of 610Music, a direct representative for Universal Music Group in Africa, unveiled two of his newly signed artistes to the world over the weekend. The event pulled in dignitaries from all over the globe to witness what many have dubbed “the birth of greatness.” END_OF_DOCUMENT_TOKEN_TO_BE_REPLACED

GuiltyBeatz is ringing in the summer! The Grammy-nominated Ghanaian producer and DJ is back with another dazzling solo effort – an Amapiano-infused dance anthem ‘Universe’ featuring Pop sensation, Mr Hudson and buzzing Ghanaian singer, Twitch 4EVA. END_OF_DOCUMENT_TOKEN_TO_BE_REPLACED