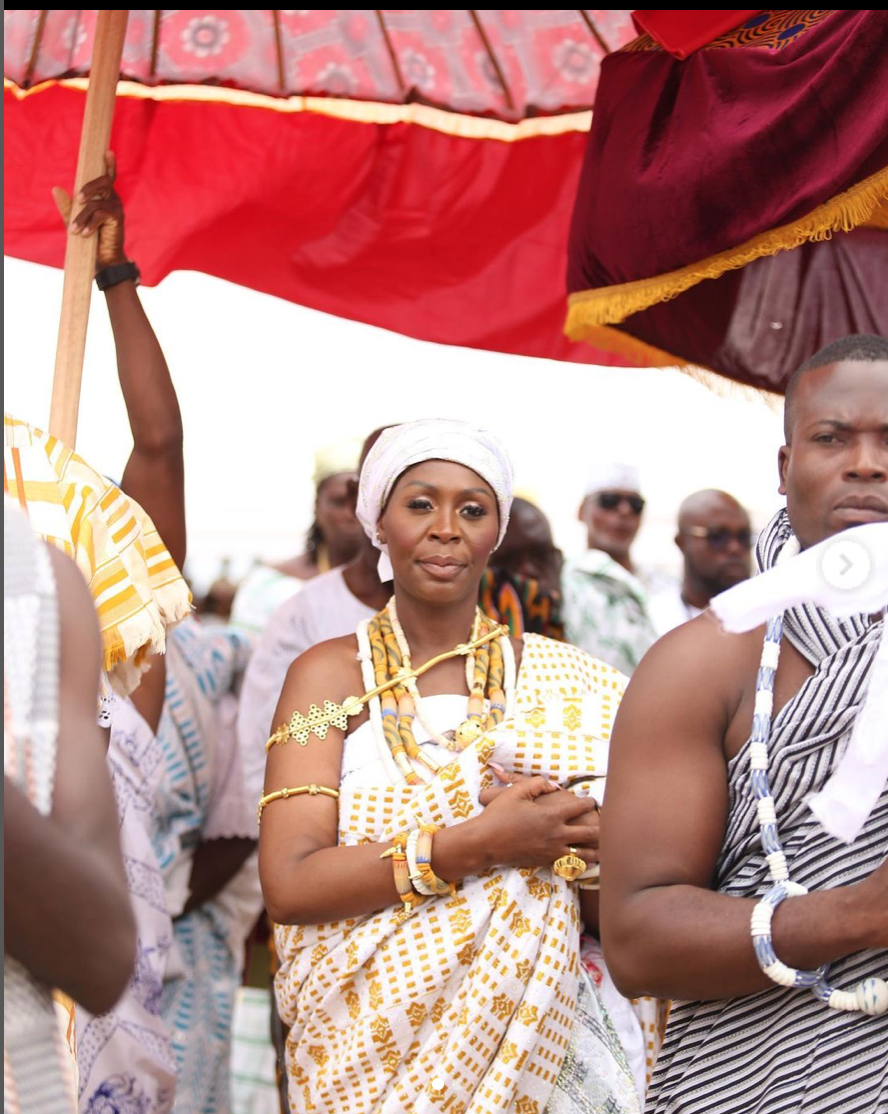 Ghanaian businesswoman, Confidence Haugen has been officially crowned the Queen-mother of Anlo State.

Her coronation as Mamaga Buiekpor II of Anlo State comes following months of traditional activities to prepare her for the big day.

Her coronation was done alongside her king, HRM Dutor Torgbui Wenya III of the Anlo Kingdom.

To climax the festivities, a beautiful coronation durbar was held on Saturday, August 13, 2022.

In attendance were some of the big names of the Ghanaian entertainment industry, including Kalsoume Sinare, Zynell Zyuh, Nadia Buhari, Gloria Sarfo, Beverly Afaglo amongst others. Chairperson of the Convention People’s Party (CPP), Samia Nkrumah was also present.

In anticipation to the big day, a coronation concert was held at the Ashiata Beach, where musicians including Efya, Hajia4Reall, Adina, Eno Barony, D-Black and others, thrilled patrons to exciting performances.

See some media from the big day below;

Official photos from Bridget Otoo’s engagement ceremony over the weekend

The Ghanaian singer and actress, Sister Derby has made her international film appearance in the yet-to-air Netflix original film, ‘RAINBOW’. END_OF_DOCUMENT_TOKEN_TO_BE_REPLACED

Ghanaian broadcaster, Kafui Dey is on a mission to combat illegal mining in Ghana and wants to use any means possible to bring the world’s attention to the problem. END_OF_DOCUMENT_TOKEN_TO_BE_REPLACED

Harvey Mason Jr, CEO of the Grammy Awards, has shared insights on the nomination process and how to win a GRAMMY with Ghanaian artists during a private dinner meeting. END_OF_DOCUMENT_TOKEN_TO_BE_REPLACED

Harvey Mason Jr., the Chief Executive Officer (CEO) of the Recording Academy, organizers of the Grammy Awards, has said there are some misunderstandings regarding the creation of an Afrobeats category in the Grammy Awards. END_OF_DOCUMENT_TOKEN_TO_BE_REPLACED

The Chief Executive Officer of Big Ideaz Consult, Kojo Poku has revealed that none of the artists who were billed to perform at the recently held Global Citizen Festival in Accra were paid a performance fee. END_OF_DOCUMENT_TOKEN_TO_BE_REPLACED

Ghanaian musician, Kirani Ayat has called out the Presidency for using some portions of his music video in an advertisement without his permission. END_OF_DOCUMENT_TOKEN_TO_BE_REPLACED