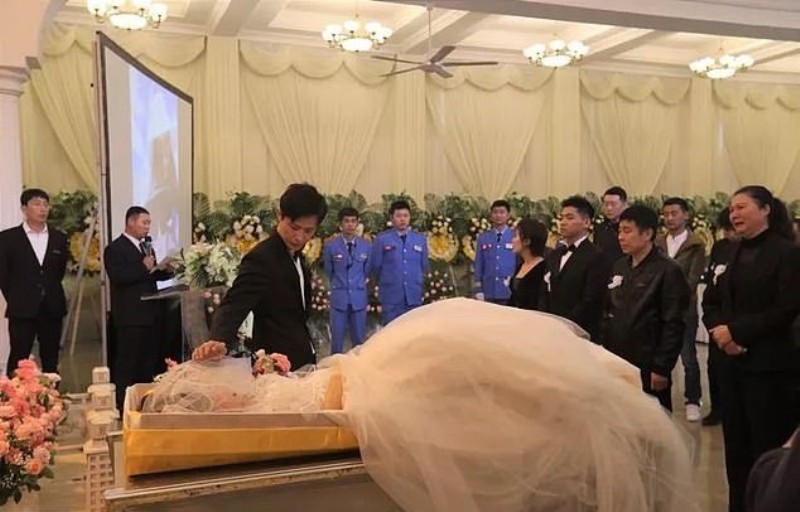 A Chinese man has married his partner’s corpse during her funeral to show his devotion to her after she died from breast cancer in China.

35-year-old Xu Shinan lost his wife Yang on October 14 at the age of 34 after her battle with cancer for five and a half years.

The heart-broken groom said he decided to marry his late fiancée’s corpse to help her fulfill her dream of being a bride.

Xu’s deceased partner of 12 years, Yang Liu, was dressed in a white bridal gown and surrounded by 169 bouquets pink roses when Xu read his wedding vows to her, according to a local report.

The ceremony took place on Saturday morning ( Oct.19) in the funeral parlor of Dalian in eastern China. It was attended by the families and friends of the couple.

Speaking on his wife’s death, Xu said: “My wife used to say that nobody was allowed to cry should she die. I was holding back my tears on the day, but when [her body] was sent for cremation, I couldn’t fight it anymore.”

Xu and Yang who were university classmate registered their marriage in August 2013, and started to prepare for their wedding.

But the wedding plans had to be put on hold three months later when Yang began to experience pain in her chest. In March 2014, she was diagnosed with breast cancer.

Xu said Yang went through surgery and multiple rounds of chemotherapy, but she never cried and was always smiling, He added that she even documented her treatment through her account on Twitter-like Weibo, hoping to inspire other cancer patients.

In 2017, Yang’s condition improved and the couple started to save money for a flat and prepare for their wedding again. Only for the cancer to return a year later before they could tie the knot.

“We went across the nation, seeking medical advice while traveling. It was a happy year after all,” Xu said.

In May 2019, Yang’s health deteriorated and had to be hospitalized in Dalian for months before she was knocked into a coma on October 6 and pronounced dead a week later.

“She couldn’t even recognize me in the end and we didn’t bid farewell,” the devastated man said.

He also disclosed that after Yang died, he discovered from her online shopping cart that she had been choosing wedding gowns before she was hospitalized.

“I promised to buy her the most beautiful wedding gown,” said Xu who went to a bridal store a day after her death to organize the wedding.

Speaking at the wedding-cum-funeral ceremony, an emotional Xu said: “Although today’s wedding is late, it has realized Yang Liu’s dream.’ He added: ‘All that I can do is to fulfill your wish and letting you wear a wedding dress fulfills my wish.”

The groom broke down in tears after the speech.

A United States Central District Court in California has postponed the sentencing of Nigerian fraudster Ramon Abass known as Hushpuppi for the second time. END_OF_DOCUMENT_TOKEN_TO_BE_REPLACED

Singer, Paul Okoye of Psquare has said that the only thing moving forward in Nigeria is music and entertainment. END_OF_DOCUMENT_TOKEN_TO_BE_REPLACED