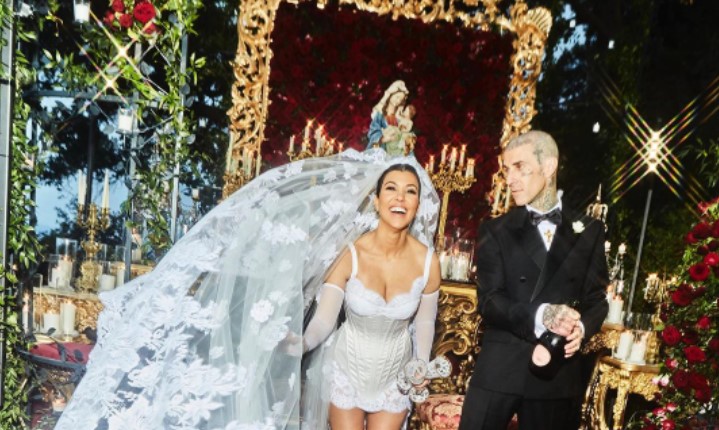 Kourtney Kardashian and Travis Barker have got married – again.

The couple – who exchanged vows in a practice ceremony in March before making their union official in a Santa Barbara courthouse last weekend – tied the knot in front of family and friends in Portofino, Italy.

Both bride and groom wore Dolce and Gabbana outfits, with the Poosh founder teaming her short white dress with a long embroidered veil.

Kardashian’s children, Mason 12, Penelope, nine, and seven-year-old Reign – who she has with former partner Scott Disick – were in attendance for the ceremony, along with her mother, Kris Jenner, and siblings Kim Kardashian, Khloe Kardashian, Kylie Jenner, and Kendall Jenner, as well as the latter’s boyfriend, Devin Booker, and her mum’s partner, Corey Gamble.

On Barkers’ side were his son Landon, 18, daughter Alabama, 16, stepdaughter Atiana De La Hoya, 23, and friends including Machine Gun Kelly and his Blink-182 bandmate Mark Hoppus.

According to MailOnline, 43-year-old Kardashian entered the garden for the outdoor ceremony at Castello Brown on the arm of her mother while a woman sang Ave Maria.

They then exchanged vows as dusk fell, before posing for photos ahead of further celebrations.
It was previously revealed tenor Andrea Boccelli will be performing during the wedding, though it is unclear at what stage of the festivities he will take the mic.

Kardashian and Barker have rented out the entire castle, which was built during Roman times as a military defence, and as well as their four-day Italian celebration, they are also planning another huge reception for their friends back in Los Angeles “in the near future”.

Although the loved-up pair were thought to have first tied the knot during a ceremony at the One Love Wedding Chapel in Las Vegas in March, the wedding wasn’t legally binding because they did not obtain a marriage license.

This is the third marriage for 46-year-old Travis, who was briefly married to first wife Melissa Kennedy between 2001 and 2002, before he went on to tie the knot with the mother of his children, Shanna Moakler.

Bose Ogulu has told her son Burna Boy to “tone down the madness” as she celebrated his birthday. END_OF_DOCUMENT_TOKEN_TO_BE_REPLACED

The Hewale Lala (Song Of strength) hit maker Perez Musik gets ready to have his first-ever major concert. END_OF_DOCUMENT_TOKEN_TO_BE_REPLACED

Kofi Sonny, CEO of 610Music, a direct representative for Universal Music Group in Africa, unveiled two of his newly signed artistes to the world over the weekend. The event pulled in dignitaries from all over the globe to witness what many have dubbed “the birth of greatness.” END_OF_DOCUMENT_TOKEN_TO_BE_REPLACED

GuiltyBeatz is ringing in the summer! The Grammy-nominated Ghanaian producer and DJ is back with another dazzling solo effort – an Amapiano-infused dance anthem ‘Universe’ featuring Pop sensation, Mr Hudson and buzzing Ghanaian singer, Twitch 4EVA. END_OF_DOCUMENT_TOKEN_TO_BE_REPLACED