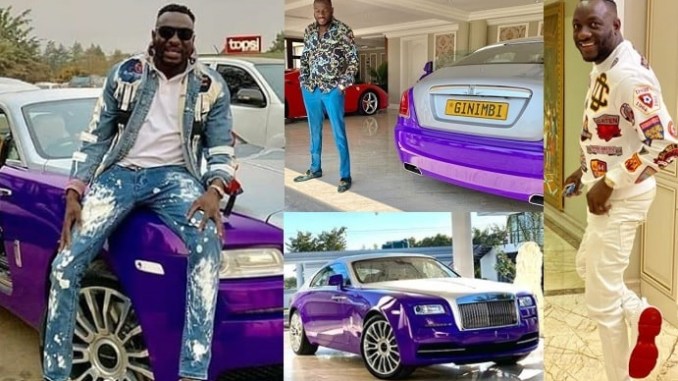 Popular Zimbabwean socialite and businessman Genius “Ginimbi” Kadungure,  and three other people died in the early hours of Sunday morning when his purple Rolls Royce collided with a Honda Fit in Harare.

“The accident occurred this morning [Sunday] along Borrowdale Road and it is alleged that Kadungure died on [the] spot. We are still gathering more information on the issue,” Nyathi was quoted as having said.

The petroleum trader was 36 years old.

Zimbabweans took to social media on Sunday, expressing shock over the “untimely” death of the Pioneer Gas boss.

“This is unbearable. A young man who worked hard and enjoyed hard is no more! The flower has wilted! Go well Boss Ginimbi. MHDSRIP,” said Kasukuwere, who fled to South Africa as former president Robert Mugabe was deposed.

ZimLive reported that Kadungure’s Rolls Royce collided head-on with the Honda Fit and then veered off the road and smashed into a tree before catching fire.

Kadungure was allegedly thrown out of the vehicle and died at the scene along with three friends identified only as Karim, Elisha, and Moana who was reportedly celebrating her birthday.

As he gets into the waiting vehicle, Kadungure tells his followers he is “driving [a] Rolls Royce Wraith”. The video, also shared by ZimLive, cuts out as the hit song “Hello” by Kabza de Small and DJ Mapholisa blasts from the US$500000 motorcar’s sound system.

Kadungure was a cousin of Mary Mubaiwa, the estranged wife of Zimbabwe’s Vice President Constantino Chiwenga. In the past, Kadungure has been repeatedly arrested by the ZRP for tax evasion as he allegedly under-declared the value of his numerous high-end vehicles when importing them from South Africa into Zimbabwe.

Earlier this year, he added a new Ferrari 488 Spider, valued at US$350 000, to his fleet. A few weeks ago, Kadungure turned heads in Zimbabwe’s capital city when he purchased a Lamborghini Aventador S Roadster worth US$600 000.

10 pictures that capture how outstanding WORLAFEST 2020 was

My mom owns 2 houses, where’s your mother’s own? Elikem Kumordzie replies troll who shamed him for still living in his mom’s house

Some members of popular feminist group in Ghana, “Pepper Dem Ministries”, have called out ace-broadcaster Nana Aba Anamoah over recent comments she made about taking up traditional roles at home. END_OF_DOCUMENT_TOKEN_TO_BE_REPLACED

Aisha Modi has returned to social media by showing off her newly acquired body. END_OF_DOCUMENT_TOKEN_TO_BE_REPLACED

UK-based Ghanaian international singer and performer, Stephanie Benson has made a shocking revelation about her sexual life that has left fans agape. END_OF_DOCUMENT_TOKEN_TO_BE_REPLACED

Ghanaian actress and movie producer, Yvonne Nelson has opined that special treatment and incentives given to politicians should rather be enjoyed by teachers and doctors. END_OF_DOCUMENT_TOKEN_TO_BE_REPLACED

American rapper DaBaby, has shared his experience with officials at the Lagos airport. END_OF_DOCUMENT_TOKEN_TO_BE_REPLACED