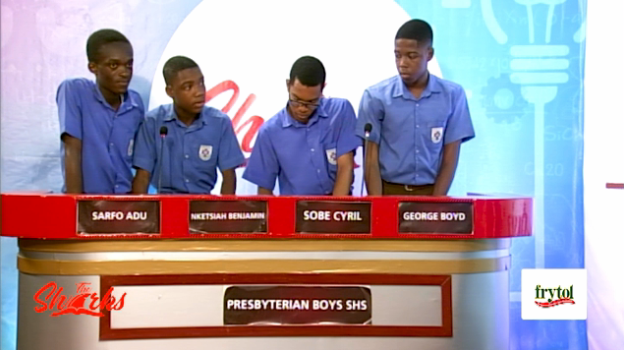 The defending champions, Opoku Ware School failed to progress to the semifinals of The Sharks Quiz, courtesy a brilliant display by their opponents, Presbyterian Boys Senior High – Legon.

This contest was a repeat of last year’s quarterfinal where at the same stage Opoku Ware School defeated the Presec lads and eventually went on to amass the trophy. It was palpable from the onset that the “blue magicians” were in for revenge. They led throughout the entire contest, from the Right Corner Round (Social Literacy) to the R cubed round (Reading, Writing, and Arithmetic), the STEM round and finally the fans’ favorite, the one-on-one round. Opoku Ware showed glimpses of brilliance in the contest but were overpowered by the much focused Presec side. The final scores were 145 to 50 points in favor of the Presecans.

At the junior level, DPS International were incredible in their quarterfinal victory over newcomers British Columbia College. Many expected a keen contest between the two impressive sides judging from their performances in the round of 16. Experience came to play however as, DPS International, who are last year’s finalists showed more grits and determination to clinch victory in the contest. 105 -20 it ended. DPS International becomes the first school to qualify for the semifinals at the juniors level.

The excitement still continues in The Sharks Academic Competition. Next week Volta regional heavyweights Mawuli School meet with an impressive Okuapemman side. The contests shows on TV3 (DSTV 279) every Saturday from 2.30pm and streams live on The Sharks facebook page.