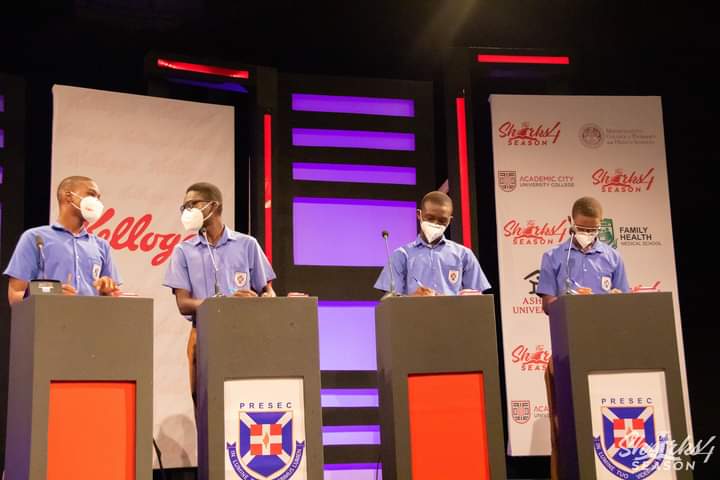 Powers are making ascending integrations as the fourth season of #TheSharksQuiz gradually unfolds into another phase. In previous contests, hearts have been broken, pulses numbed and expectations obliterated. Week after week, surprises erupt wildly and emotions are toyed with as various schools battle to proceed or recede.

At the senior level of the midweek contest on the sharks quiz, the battle of intellectual disdain and deservedness across social media was not minimal. It was as though the grand finale was present. The contest featured two of Ghana’s most bragged about second cycle institutions, Presec – Legon and Adisadel College. Both institutions hold national titles in various scores of academia and exude intense rivalry in that regard hence, meeting each other on the same front was a desired contention. However, one coveted feat Presec has over Adisco is that they are currently the defending champions of #TheSharksQuiz.

The stage fired up and eyes painfully glared as ears raptly gave attention to proceedings. In the first segment of the contest, either school correctly picked six out of the eight questions they were quizzed. This scored each of the schools 60 points and intensified the suspense that had already taken over the airwaves. Anticipation grew and odds blew as transition was made into the second round.

In the R Cube round, one of the contending school seemed to have drawn a line for the other, limiting the impact of the latter in that round. Presec Boys’ raced away with Adisadel College showing impression of possessing the ability to give them a run. The legon boys nonetheless severed their opponents with 45 points while they nursed a 15 score. A statement had began to be made. Relevance was calling but only one team was heeding the call. The green light flickered for the third round to commence.

If academics is narrowed down to science and maths, the contesting schools would be the mechanism and operation simultaneously. Although the Accra contingents may have been recorded to have more laurels in that front, the Cape Coast counterparts aren’t to be petted at all. The STEM round thus left much to be hoped for. Either school was ticked to beat the other and escape being squeezed out.

The beatdown did happen as presumed but what was unlikely was the gap with which the blue magicians lambasted their zebra brothers. 85 points for the defending champions and -10 for their contenders! The third round was over and a leeway had been created. Just one round to end the order of the day and the Adisco boys had to conjure a way to save their name. Could this be possible? Well, It was still a round of losing points to wrong answers and maybe it was the moment for Adisadel. Otherwise, history would stand and nobility would be one-sided.

The fourth round as usual featured pairs of the contestants, one from each school, battling out in their respective areas of excellence. One on one they came, redeeming the pledges they had probably made to their respective schools. It was a heated round indeed but in the end, defeat was conceded and victory crowned. Adisadel College ended the round with 15 points. 5 less of Presec Boys’ score. That brought the total score to 210 over 80.

The winners of the Sharks Quiz season 3 have proven themselves in their first contest of the fourth season. This win was unusual and unrivalled yet, because they dominated every round and ruled a margin yet to be unruled. Presec Boys’ reinstated that truly they are blue-blooded. Could this be another journey into consecutive victory? We can only stay tuned for what would transpire in their subsequent competitions.

Is It Possible to Trade Forex Safely in Nigeria?