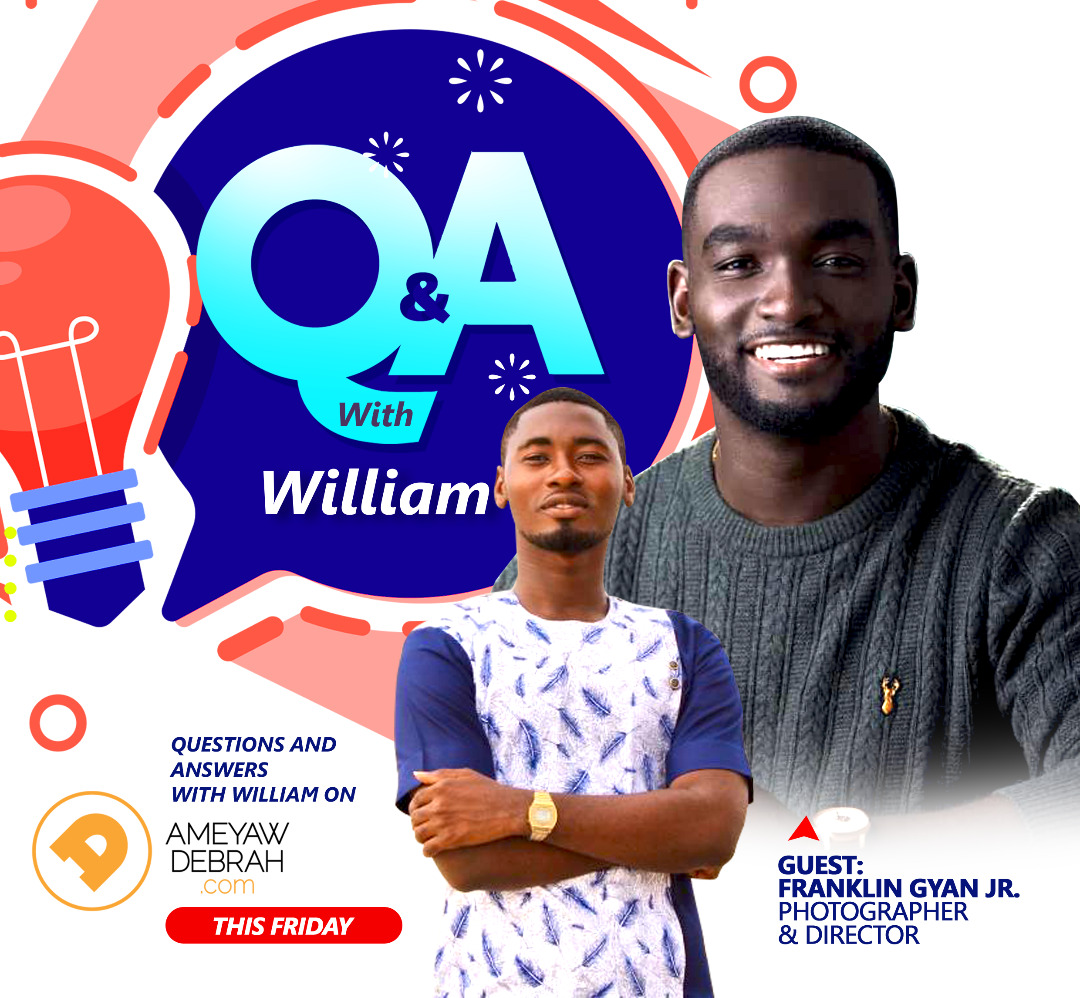 Imagine how heartbreaking it will be when people who you regard as a family come tearing you apart with hurtful words that seemingly made you feel “useless” just because of a career you chose to follow to the latter. But amidst all of this, he has risen above mediocrity and what society says to blaze the trail in the photography space.

Although his face might not be out there, his breathtaking works speak for itself. Throughout the country, his work with MTN, Nestle, Samsung, Afrochella, Wilmar as well as Star Beer, FranIce, Orijin, Accra Mall, and others sits comfortably on Billboards throughout the country.

Today, Franklin Gyan JR. continues to shine a bright light on the many young creatives who look up to him as a beacon of hope for excellence.
Q: Tell me about yourself growing up, education, and how photography started for you?

A: I had my primary school education at St Theresa’s school, then I moved to Mfantsipim School where I had my senior high school education; I studied visual arts. From there I moved to Accra International School of Advertising and Design where I studied Graphic Design. I applied to pursue Communication Design at KNUST but was initially refused despite qualifying academically. I later managed to divert from my given course to pursue a degree program in Communication Design for four years.

Upon completion, I was privileged to work with Innova DDB, one of the giants in the industry, and as time went on, I developed the love and passion for photography. At the time, Dennis Dartey was my mentor. He was the one taking me through the entire photography process but unfortunately, he died in 2013. From then till now, I have had to learn everything on my own.

Q: At what point did you decide to fully go into photography?
A: During my National Service period. Right around the time, I was about ending my stint with Innova DDB. It was either I stayed and be a graphic designer or move into photography full time. During my national service, occasionally I was given the opportunity to shoot some of the brands because they saw the potential in me. With time, I realized my passion for photography was fast overshadowing my design prowess so I just had to switch.
Q: Have you always wanted to do photography?
A: Initially, what I wanted to do was architecture, because I loved interior designing but unfortunately, I don’t know where it passed, it just vanished.
Q: Considering what you studied in school, were your parents really in support of it?
A: Yes, my mother was, but my father was skeptical. He didn’t understand it. But yeah, he couldn’t do anything about it. He was just skeptical, he wasn’t sure if this was what I wanted to do. But someway somehow as time went on and things started developing, they warmed up to it. I once remember an uncle of mine rubbished everything telling me I am wasting my time with art and design. He really made me feel useless and that is why I am trying to improve upon my work to prove a point to him. He has apologized for a couple of times and regretted his action.

Q: Professionally, how did you land your first photography job aside Innova?

A: (Sigh) This is a question o! I think that will be Brommon. That was through a friend of mine, I think somewhere in 2015 or 2016.
Q: How was the feeling like for you at the time, looking at the caliber of person you had to deal with?
A: Honestly, I didn’t know who he was at that time, so it was more of do your good work, you know! Just pay attention and get the work done because, at the end of everything, it is your work that is going to make them come back. So my whole mind at the time was to get the best work out. Before I shoot any project, I first look at how similar stuff is done on the international scene because I always want to put out my very best. That’s how I push myself constantly beyond the limit.
Q: Generally, do you think creatives in Ghana are being appreciated for what they do?
A: Errmm, initially it wasn’t but it is picking up, I won’t even lie. It’s actually picking up because the presence of social media makes our work important or relevant. People are actually realizing that you can be a doctor or business owner but if you don’t have a creative on your team nobody is paying attention to you. You might be selling the most expensive thing but if you don’t have a creative on your team, it’s not going to work. Initially, that wasn’t the norm, things have changed. I’ll attribute it to the presence of social media especially because right now some old folks who didn’t appreciate art appreciate it now. You can see that more people are not having problems being entrepreneurs in the art industry because they’ve realized that being on your own even within the art sector, can fetch you money. It is being appreciated but it can be way better.
Q: Which professional photographer aside your mentor has influenced your life and how have you inculcated that into what you do now?

The bob pixel in the early stages and it shifted to Joel Grimes.

A: In Tech, I used to look up to Bob Pixel. I used to have his pictures saved on my laptop. He is one of the biggest shots in the industry but along the line, it shifted to Joel Grimes. And like I said, I’m more endeared towards the western world so initially, it was Joel Grimes because my mentor at the time, before he died, also regarded Joel Grimes as his mentor. But then I realized that as time went on with the world developing and everything, people’s art sense started shifting from his style because I realized people weren’t appreciating his style as much.

Q: What was his style?
A: It was a grungy dark type of photography and not everybody was appreciating it so I gradually had to re-adjust and try and do something that will be more appreciated both in the commercial, lifestyle, and fashion space. So I came across one guy called Eric Almas who is a commercial photographer based outside and honestly, his works still keep me on the edge. He’s the benchmark for me.
Q: But have you tried reaching out to him?
A: Eric Almas, I’ve reached out to him a couple of times but he doesn’t reply so, yeah. It is understandable. He’s a busy guy.
Q: What makes your work stand out particularly to you?
A: Am I the best person to answer this question? I don’t think so. I think it should be the people who view it. My work etiquette is what I can talk about because I always want to make sure that the client is happy, regardless. In whatever I do I want to make sure the client is happy. Doing good work and getting it on time, is very professional, not following the crowd or popularity; those are my guiding principles. Some people are clinging on to the thirst for popularity so they’ll practically do anything to make them popular. For me, I’m not like that. Because I have an advertising background it is more about how to sell a product or service. So if I’m able to execute this successfully, it’s more like a gain, for me.
Q: Arguably, you’ve built a huge brand for yourself, looking at the kind of people you work for. What do you think you’re doing right that others aren’t doing?

A: (Sigh and Laughs) Eei chale, these questions, errm, I think it’s being professional and the way you carry yourself. The fact that you are a photographer does not mean you cannot wear long sleeves, you can’t drive a nice car, you can’t wear a suit, you can’t have some type of conversation with some people, you get me? I feel like people have narrow-minded or boxed themselves so much that they think because they’re photographers they can’t express themselves in a particular way, they can’t do this or be here. Personally, I think I can attribute it to the way I carry myself. Your branding and presentation, your work ethics actually, make you stand out.

Q: You’ve worked for huge brands like MTN, Nestle Ghana, Star, Sarkodie, Brommon, etc, the list goes on and on. How does working with these brands feel like?

Storytime with Mary, a great tool for parents of pre-school children in COVID-19 times and beyond

The Ghana Chapter of the Young African Women Congress (YAWC) Network and the ExLA Group Health Programme (EGHP) have carried out an outreach programme at the female division of the Nsawam Minimum Security Prisons on Thursday 4th August, 2022. END_OF_DOCUMENT_TOKEN_TO_BE_REPLACED

Toyin Lawani, Nigerian Entrepreneur sits with Chude Jideonwo, host of #WithChude and founder of Joy, Inc. to share about the loss of her pregnancy, her family and her previous relationship. END_OF_DOCUMENT_TOKEN_TO_BE_REPLACED

Here, we’ll be documenting our experience with buying and trying out different cannabis strains from UnitedCannabisSeeds.com. END_OF_DOCUMENT_TOKEN_TO_BE_REPLACED

On Tuesday, August 2, Netflix hosted a “See What’s Next Africa” content showcase in Lagos, Nigeria, to spotlight its increased investment in Africa’s rich storytelling history through exciting new projects in a wide range of genres and formats that will be available in 190 countries. END_OF_DOCUMENT_TOKEN_TO_BE_REPLACED

The Ghana Beauty Awards (GBA), is here again with the 6th Edition under the theme; Celebrating Beauty Excellence; the key to sustainable economic growth. END_OF_DOCUMENT_TOKEN_TO_BE_REPLACED

“Greater works is always a huge endeavor; we start working from the end of one edition for the next one. These things don’t just happen by chance. What we call the ANOINTING is deliberately nurtured and cultivated. We have to build a place for GOD; a system for GOD to use; you can’t just out of the moment pull up anything and say GOD use it. We have to prepare for HIM and so we take time to prepare. “ END_OF_DOCUMENT_TOKEN_TO_BE_REPLACED