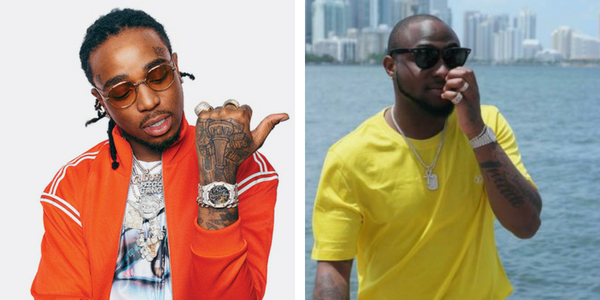 Quavo to feature Davido on his solo album “Quavo Huncho”

Nigerian musician, Davido has been named among other top American stars to be featured on Quavo’s solo album, Quavo Huncho.

The “assurance” hit maker made the list alongside Drake, 21 Savage, Cardi B, Kid Kudi, Travis scott among others, when Migos member, Quavo unveiled some of the names of artists expected to feature on his upcoming album which was initially scheduled for release in September.

The album is expected to also feature the migos brothers, Offset and Takeoff.

Grammy award-winning Nigerian artist, Wizkid is currently trending after making some statements about the status of the rap genre in Nigeria. END_OF_DOCUMENT_TOKEN_TO_BE_REPLACED

Nigerian Disc Jockey and daughter to billionaire Femi Otedola, DJ Cuppy has outdoored the man in her life for the very first time on social media. END_OF_DOCUMENT_TOKEN_TO_BE_REPLACED

On Air Personality and YouTuber, Jessica Opare Saforo has responded to Shatta Wale’s desire to marry her. END_OF_DOCUMENT_TOKEN_TO_BE_REPLACED

Ghanaian model and entrepreneur, Hamamat Montia has welcomed a baby, months after announcing her pregnancy on Instagram.  END_OF_DOCUMENT_TOKEN_TO_BE_REPLACED