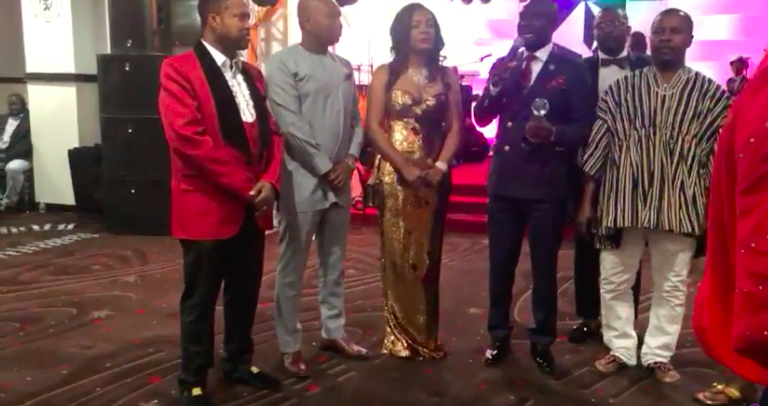 Radio host, Captain Smart proposes marriage to another woman during award ceremony in USA[/caption] Captain Godsbrain Blessed Smart, host of Adom FM’s socio-political talk show “Dwaso Nsem”,  surprised the many people who attended this year’s 3G Awards as he proposed to an unknown lady. The controversial morning show host amidst some beautiful songs and surrounded byfamily and friends, went down on his knees beautifully and placed the beautiful ring on the hands of the lucky lady. This move by Captain Smart has led to many questioning  whether it was just a stunt to add spice to the award ceremony,  since the radio and TV show host known to be married. https://youtu.be/c9uN1qqMeNI Outspoken and Controversial Member of Parliament, Kennedy Ohene Agyapong last week revealed that the relationship Captain Smart had with a married woman in Germany had resulted in the death of the woman’s husband. According to Mr Agyapong, the Captain Smart had an amorous relationship with a married woman  (Afia Pokuaa) in Germany and the husband of the woman later passed away due to a broken-heart. “The evil that men do lives after them. Captain Smart, you will live to regret the death of this innocent man”, he added. It was previously reported that a Belgium-based Ghanaian called Murphy accused Captain Smart of snatching his wife of 18 years with whom he has two children while they were married. He disclosed that he lost his job and expected his wife to stay by him and support him in this crisis but his wife informed him that she had to travel to Ghana and could not stay by him. Unknowingly to him, his wife was on her way to Ghana to get married to Captain Smart while she was still legally married to him. Murphy, therefore, begged Captain Smart to leave his wife alone as he still loves her and want her back but it all proved futile. Kennedy Agyapong revealed in an interview that Murphy has kicked the bucket after grieving the neglect of his wife at such a crucial stage and stated that Captain Smart will live to regret this day.]]>

Related Topics:Captain Smart
Up Next