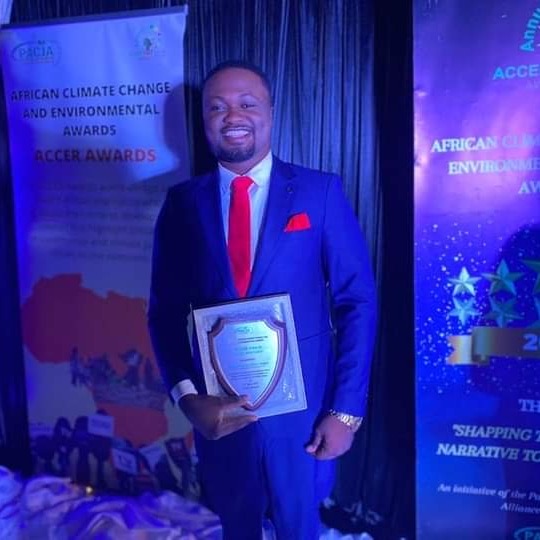 Ridwan’s winning entry broadcast on StarrFM and supported by the Pulitzer Centre in the US, ‘COP26 and The African Interest’, strived to capture the debates and issues that confronted Africa ahead of the 26th Conference of Parties of the UN Framework Convention on Climate change that took place in Glasgow, UK last November.

Best African radio Journalist in Environmental and Climate Change Reporting. A story that aired on StarrFM, looking at Climate finance in the build-up to COP26 has brought me honour in Kigali, Rwanda – my third continental award in 5 years. Many thanks to all the experts across the continent including in Mali, Kenya and our very own Dr. Theo Acheampong  for his deep insights on the story. My immeasurable gratitude to the Pulitzer Center for supporting this project. I dedicate this award to my siblings – for dealing with my long spell of absence since I started this profession. God bless everyone for the support

Read Also: Ghanaian news anchor on a roll! Ridwan up for another African Journalism Award in Rwanda

Mhone of The Nation, Malawi emerged top from his entry Making Zomba Green Again which tells the story tells of the struggles to regreen the Zomba hills threatened by the more than 90 per cent of the rural people who turn to its forest for charcoal and firewood.

Siago’s entry, This Kenyan Village Halted Deforestation by Selling Carbon Credit, on the other hand highlighted how conservation of mangroves is offering viable alternatives to fishing.

Ridwan Karim Dini-Osman is a Pulitzer Center grantee and a multiple-award-winning development journalist and news anchor working for Ghana’s EIB Network – (GHOneTV and StarrFM). Dini-Osman is a recipient of the 2018 Lorenzo Natali Media Prize, a prestigious global award run by the European Commission.

He is Ghana’s 2017 best Journalist in sustainable development reporting and ZIMEO Award 2017 Best African Journalist in Peace and Security reporting.

Ridwan Karim Dini-Osman is a 2021 fellow of the University of Rhode Island’s Metcalf Institute Annual Science Immersion Programme for Journalists and a recipient of the 2021 International Center for Journalists’ Global Health Crisis Award for COVID-19 reporting.

Dini-Osman holds a bachelor’s in communications studies from the Ghana Institute of Journalism.

The African Climate Change and Reporting (ACCER) Award  is an initiative of the Pan African Climate Justice Alliance (PACJA), a coalition of civil society groups, faiths and community based organisations, academia, researchers and individuals who advocate for fair and just climate regimes for African people.

Listen UP: Amerado drops ‘Back To Sende

Bose Ogulu has told her son Burna Boy to “tone down the madness” as she celebrated his birthday. END_OF_DOCUMENT_TOKEN_TO_BE_REPLACED

The Hewale Lala (Song Of strength) hit maker Perez Musik gets ready to have his first-ever major concert. END_OF_DOCUMENT_TOKEN_TO_BE_REPLACED

Kofi Sonny, CEO of 610Music, a direct representative for Universal Music Group in Africa, unveiled two of his newly signed artistes to the world over the weekend. The event pulled in dignitaries from all over the globe to witness what many have dubbed “the birth of greatness.” END_OF_DOCUMENT_TOKEN_TO_BE_REPLACED

GuiltyBeatz is ringing in the summer! The Grammy-nominated Ghanaian producer and DJ is back with another dazzling solo effort – an Amapiano-infused dance anthem ‘Universe’ featuring Pop sensation, Mr Hudson and buzzing Ghanaian singer, Twitch 4EVA. END_OF_DOCUMENT_TOKEN_TO_BE_REPLACED