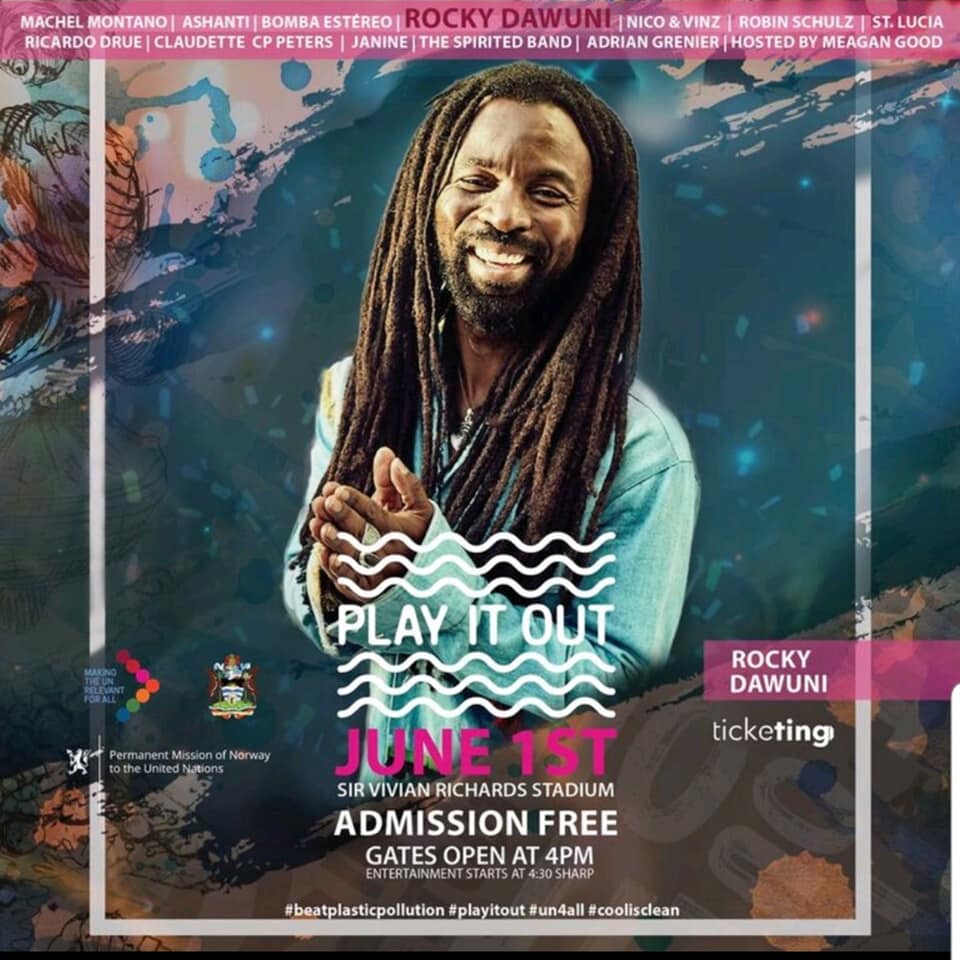 Rocky Dawuni joins UN ‘Play It Out’ concert in Antigua with Ashanti, Machel Montano and more.

“We are at a decisive moment in the history of humanity where we need action across cultures, peoples and nations to address the urgent issue of plastic pollution. As musicians and players of instruments we have a unique and pivotal role to amplify this urgency and spur people to immediate action.”  Rocky Dawuni

The President of the UN General Assembly, Maria Fernanda Espinosa,  joined Molwyn Joseph, Environment Minister of Antigua and Barbuda, and Mona Juul, Permanent Representative of Norway, to welcome special guest Ashanti as a headliner at the upcoming‘Play it Out’ concert to tackle plastic pollution.

“At the heart of my Presidency is a firm belief that multilateral solutions, involving a diverse group of stakeholders, are the only sustainable and efficient way to deliver results,” noted President Espinosa. “The challenge of plastics is one that spans the entire globe…every region, every ocean, every environment is impacted. We must work on this together. Play it Out purposefully brings together Member States, the private sector, philanthropic groups and individuals, and focuses this combined energy on a joint solution.”

“We have all seen the images of turtles choking on straws, or birds wrapped in plastic, and it’s devastating,” noted Ashanti. “But these images, while emotional, don’t capture how massive this problem really is. This concert is about raising awareness, it’s about educating people to the seriousness of the situation.”

Up to 15 million tons of plastic litter are dumped into the ocean each year. Most of this has the potential to persist in the ocean for long periods, to travel with ocean currents across long distances, and to accumulate in habitats far from its point of origin. In fact, while most plastics are designed to last, their breakdown has been shown to result in microplastics that have been found everywhere from the insides of marine wildlife to the deepest parts of the ocean.

Along with Ashanti, the concert, which aims to Play it Out to Phase it Out, will be joined by soca star Machel Montano, along with GRAMMY Nominated Rocky Dawuni – Ghana’s premiere reggae artist and UN Environment Goodwill Ambassador to Africa. Also joining the concert will be a lineup of artists and performers covering different regions demographics and music styles. They include American indie-rock band St. Lucia; Bomba Estéreo, an electric-duo hailing from Colombia; Nico & Vinz, an R&B act from Norway; and Grammy nominated German DJ/producer Robin Schulz. The event will also feature top local artists, including Ricardo Drue and Claudette Peters. Antigua’s Kanneh-Masons, who recently performed at the wedding of Prince Harry to Meghan Markle, will also perform.

Additionally, the concert will feature an array of speakers including dignitaries, policymakers, celebrities, and representatives from the scientific, philanthropic and academic communities. This includes actor, co-founder of Lonely Whale, and UN Environment Goodwill Ambassador, Adrian Grenier.

“We are thrilled to have this amazing lineup of artists and speakers,” said Minister Joseph. “Being the first country in the region to ban single-use plastic, Antigua and Barbuda is proud to host this event and we hope that this festival will bring international awareness to the harmful effects of plastics to our oceans.”

“It’s shocking how prevalent plastic litter in our oceans really is,” stated Mona Juul, Norway’s Ambassador to the United Nations. “And yet, people are taking action, and we see that very clearly in the Caribbean. Norway’s hope is that this concert will not only highlight the problem but showcase the opportunities for clean and healthy oceans. Norway believes that we need a new global agreement to combat marine litter. We hope that the concert will be a platform to also move that agenda forward. It is also an excellent opportunity to demonstrate how important regional cooperation is for contributing to solving this growing problem.”

The concert, set for 1 June in Antigua, will see an audience of up to 20,000 people attend live, with thousands more following online at http://webtv.un.org/.

“Plastics have revolutionized our world, offering affordability and convenience, and no one disputes that,” stressed President Espinosa. “But poor consumption and production patterns, the lack of environmentally sounds waste management systems, and use of single-use plastics, is devastating our ecosystems, and our own health and well-being. Our campaign, of which this concert is a part, will hopefully bring about change in behaviors from producers and consumers alike.”

Ghanaian singer, Efya has caused quite a stir on social media after revealing that she doesn’t know who popular Reggae artiste and Radio Host, Blakk Rasta is. END_OF_DOCUMENT_TOKEN_TO_BE_REPLACED

Ghanaian singer, Efya has reacted to Blakk Rasta’s comments about Sarkodie’s feature on the Bob Marley & The Wailer’s classic, “Stir It Up.” END_OF_DOCUMENT_TOKEN_TO_BE_REPLACED

Award winning Ghana musician who doubles as a physician specialist has stated in a recent interview on Asaase Radio that, the division of fans is rather killing the Ghanaian music industry than helping in building it. END_OF_DOCUMENT_TOKEN_TO_BE_REPLACED

American rapper, Tobechukwu Dubem, better known as Tobe Nwigwe has expressed his admiration for some Ghanaian musicians with whom he would like to collaborate. END_OF_DOCUMENT_TOKEN_TO_BE_REPLACED

Ghanaian Reggae and Dancehall artist, Stonebwoy has revisited the clash he had with Shatta Wale at the 2019 Vodafone Ghana Music Awards. END_OF_DOCUMENT_TOKEN_TO_BE_REPLACED