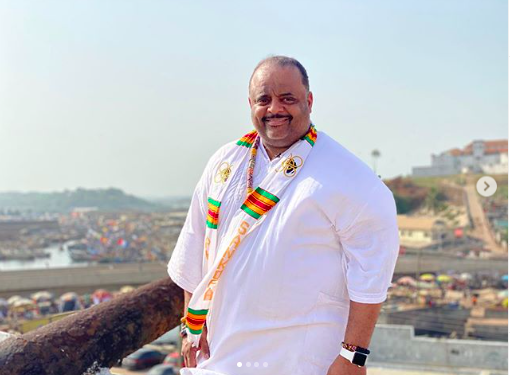 Roland Sebastian Martin,  a popular Haitian American journalist, has been made a chief in Cape Coast. He is currently visiting Ghana as part of the Year of Return activities.

An excited Roland posted a video of his coronation on social media saying : ” Today i was crowned a Chief (King) In Cape Coast Ghana.. and this was the coronation ceremony, they handed me the staff of the village and welcomed me into the family! The experience is amazing!!… ”

In the video Mr Martin was seen reciting a traditional oath, administered by some local chiefs.

Currently the Host/Managing Editor of ‘Roland Martin Unfiltered’, Martin was a commentator for TV One, the host of News One Now, and Washington on Watch With Roland S. Martin.

He was also a CNN contributor, appearing on a variety of shows, including The Situation Room, Anderson Cooper’s AC360, and many others. In October 2008, he joined the Tom Joyner Morning Show as senior analyst.

Books authored by Martin include Speak, Brother! A Black Man’s View of America, Listening to the Spirit Within: 50 Perspectives on Faith and The First: President Barack Obama’s Road to the White House as originally reported by Roland S. Martin.

Some of the highlights of his visit to Ghana includes trips to the Elmina and Cape Coast castles .

This is the Door of no return in the Elmina Dungeon (i refuse to call it a castle).. This was the last door our ancestors took, to be shipped away from their countries, families and loved ones! The year of return marks the 400th year the first ship of African Slaves left the shores of Africa!!.. #unfiltered #yearofreturn #rolandsmartinghana #godboxtours #wearefamily

Our first experience when we got to the Cape Coast castle last night was to tell our ancestors that we had arrived, we had libation poured at the foot of the sea. We prayed and they welcomed us! It was a very spiritual experience!!! #unfiltered #yearofreturn #rolandsmartinghana #godboxtours #wearefamily

Paying respect to our ancestors! For their strength and bravery!! THIS Canoe Ride was a great experience! Hope you are following my IG stories!? #unfiltered #yearofreturn #rolandsmartinghana #godboxtours #wearefamily

Related Topics:Roland Martin
Up Next

WATCH: Mercy Johnson releases teaser for her first film as a producer, ‘The Legend of Inikpi’

Burna Boy has revealed in an interview that American R & B star Toni Braxton gets 60% of the royalties of his last single ‘Last Last.’ Burna Boy made this revelation when answering questions of how the single came about while appearing on a podcast. END_OF_DOCUMENT_TOKEN_TO_BE_REPLACED

Ghana have been banned from competing in the next two editions of the FIFA U17 Women’s African Qualifiers and fined $100,000 by the Confederation of African Football. END_OF_DOCUMENT_TOKEN_TO_BE_REPLACED

Although the music industry in Ghana is heavily dominated by males, there are a few young women, pulling their weight, and rubbing shoulders with their male counterparts. END_OF_DOCUMENT_TOKEN_TO_BE_REPLACED

Chris Fonye popularly known as “Hydraulix Fonye” is a Ghanaian producer, sound engineer, songwriter and singer with a vast experience in the Ghanaian entertainment industry. END_OF_DOCUMENT_TOKEN_TO_BE_REPLACED

Although there may be hundreds of afro-beats artists in the country, Highly Spiritual Music signee, Lasmid believes he is unique. END_OF_DOCUMENT_TOKEN_TO_BE_REPLACED