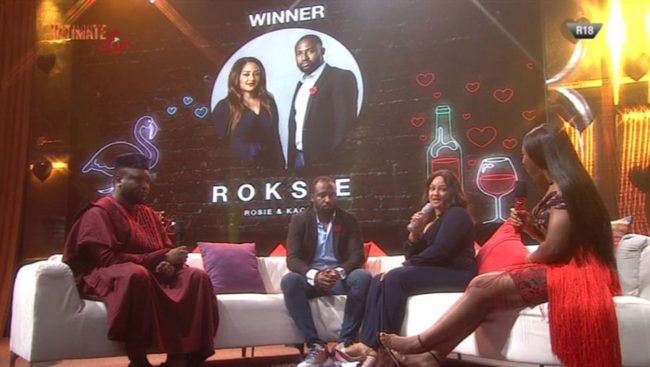 After seven weeks, filled with a whirlwind of emotions, the duo of Rosie and Kachi have emerged winners of the maiden edition of the Ultimate Love reality TV show. This was announced at the live grand finale show on Sunday, 29 March.

The couple whose romance was like a TV soap opera, also known as Roksie, polled a total of 46.33% of the overall votes in the final week beating 10 other couples to clinch the grand prize of N5million cash, a paid for traditional wedding ceremony worth N10million and a house. The traditional wedding will be redeemed when the couple declare their intent to get married within 90 days after the end of the show; and the house, after they have lived together as a married couple for one year. In addition, they also won a cash sum of N150,000 when they revealed the content of their portmanteau.

Following the announcement, a visibly excited Kachi was given a moment to decide if he would take his newly found love with Rosie to the next level with a formal declaration of his intent to propose within 90 days. The a 32-year-old serial entrepreneur from Imo state received the wrist corsage and made his commitment to his lady, bringing the first-of-its-kind love journey to a momentous end!

As with all the couples who were on the show, they each unlocked their portmanteaus to reveal its content. In cash winnings, Iykeresa went home with N300,000, Bolar N250,000 and Double Chris won N400,000.

With its premiere in February 2020, the Ultimate Love reality TV show was aimed at bringing single male and female strangers together with the hopes of finding life-long love. The show was hosted by Nollywood actress, Dakore Akande Egbuson and media personality, Oluwaseun P. Olaniyan.

Mr Eazi talks Covid-19 Pandemic on BBC This Is Africa