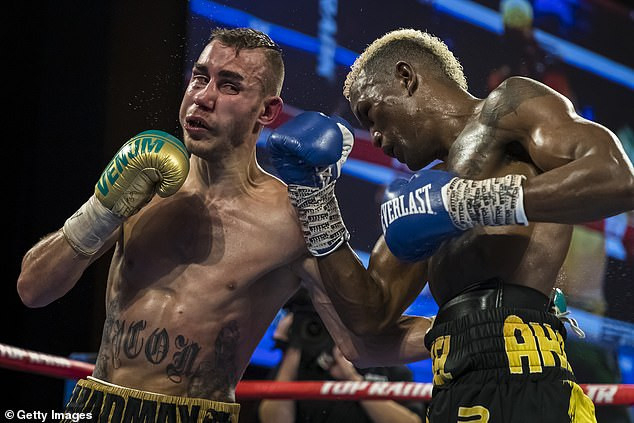 A Russian boxer is fighting for his life after the ‘right side of his skull’ was removed by surgeons following serious head injuries he suffered in a fight.

The lightweight fighter took repeated violent blows to the head before his trainer Buddy McGirt called for the end of the bout in the 11th round. He collapsed in front of spectators as he struggled on his way out of the arena.

According to gazeta.ru, his condition rapidly ‘deteriorated’ as he vomited and lost consciousness including suffering extensive bleeding.

The boxer was rushed to hospital in Washington, where part of his skull was removed to relieve swelling in his brain during emergency surgery.

Dadashev is now in a medically induced coma in the US.

His manager Egis Klimas said: ‘Dadashev experienced brain swelling, so the right side of his skull was removed.

‘Within the next couple of days the swelling should decrease. Let’s hope that the part of the skull will be put back in place.

‘The doctor says that Max may come back to normal life.’

The manager added: ‘Right now, he’s in critical condition, but the doctor told me that he’s stable.’

Famous coachAbror Tursunpultanov who knows the boxer said: ‘I am praying for Max… I just saw the news in my phone and got terrified… I have spoken to Max’s physical development coach and he told me that a good experienced doctor performed skull trepanation on Dadashev.

‘This surgeon had operated two casualties with the same trauma before and they both later got back to normal life.’