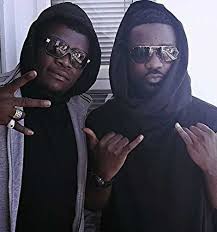 “Artist of the Decade” winner at the 20th edition of the Vodafone Ghana Music Awards, Sarkodie has revealed that he has about seven recorded songs with the late Castro.

According to the “Bibiiba” rapper, he feels weird about releasing them in the absence of Castro.

Castro “disappeared” a couple of years ago after a jet ski accident. His body was never found.

Before his “disappearance”, he and the award-winning rapper released some projects together including Sarkodie’s  ‘Adonai’ song. The song remains one the biggest hits in Ghana and beyond with over 64 million views on YouTube.

Speaking in an interview on Daybreak Hitz on Hitz FM, Sarkodie disclosed this whilst explaining why he decided to add a song with the late Ebony Reigns to his yet-to-be released project, ‘Alpha’.

“My team has been on my neck wanting me to release the record with Ebony. I have a lot of songs with Castro too. About seven of them. I feel weird releasing them. With the Ebony record, I was forced to bring it out. I wish she was here so we could take the video. But I think it doesn’t kill anything,” he stated.

When asked if he wasn’t releasing them because of copyright issues, Sarkodie stated:

“We had agreement and it isn’t going to affect me. The same time we lost him he wanted to shoot a video with me. I have the rights but I don’t know why I’m not releasing it. It’s a mileage that can go to some extent but not forever.”

Bose Ogulu has told her son Burna Boy to “tone down the madness” as she celebrated his birthday. END_OF_DOCUMENT_TOKEN_TO_BE_REPLACED

The Hewale Lala (Song Of strength) hit maker Perez Musik gets ready to have his first-ever major concert. END_OF_DOCUMENT_TOKEN_TO_BE_REPLACED

Kofi Sonny, CEO of 610Music, a direct representative for Universal Music Group in Africa, unveiled two of his newly signed artistes to the world over the weekend. The event pulled in dignitaries from all over the globe to witness what many have dubbed “the birth of greatness.” END_OF_DOCUMENT_TOKEN_TO_BE_REPLACED