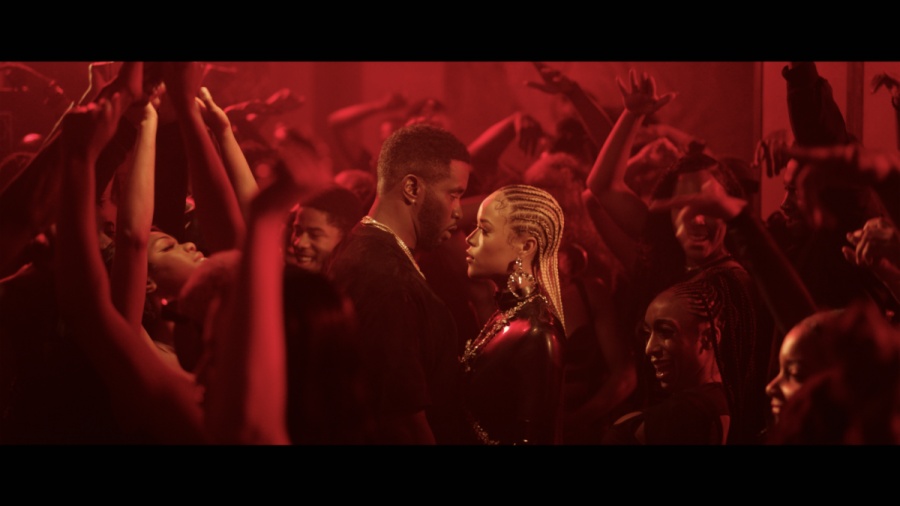 The single, which was released earlier this month skyrocketed the global charts and has 40 Million Global Streams And Over 20 Million US Streams. The new single marks the music mogul’s official return to music. The single, now available across all major music platforms, is the first to be released from Diddy’s highly anticipated new album under the newly established LOVE RECORDS imprint, in partnership with Motown Records.

The visual ushers audiences into the world of “Club Love” for the first time—a place of visionary fashion, elevated community, black excellence at the highest level, and unabashed and unadulterated sex appeal. As the clip opens, Diddy and a massive crew pull up to the club and stroll to the velvet rope as they’re greeted by Tiffany Haddish.

Bathed in red lights, their magnetic pull captivates the entire dancefloor. While the action unfolds, Diddy and Bryson Tiller bring the song to life with slick swagger and sharp style joined by an A-list cohort of equally fly friends, namely London on da Track, Joie Chavis, Serayah, KenStarrrz, Diddy’s sons Quincy Brown, Justin and Christian “King” Combs. Fittingly, the last shot hints at much more to come. Allow Diddy and Co. to invite you to party at “Club Love”…

The smooth and seductive track illuminates his latest evolution with its unshakable groove, standout verses, and an undeniable hook from Bryson Tiller. Diddy performed “Gotta Move On” alongside Bryson Tiller at the 2022 BET Awards where the legendary mogul and cultural pioneer was honored with the prestigious Lifetime Achievement Award.

The celebration for Combs started with an introduction by Jay Z and iconic performances by Mary J Blige, Lil’ Kim, Shyne, Busta Rhymes, The Lox, Faith Evans with the Maverick City Choir, and ending with Kanye and Babyface presenting Diddy with the award. The coveted award honors industry giants who have not only significantly shaped culture through their extensive careers, but who have also been transformative leaders that consistently inspire generations by setting a true standard of excellence.

In May, Combs hosted, executive produced and performed at the Billboard Music Awards. He debuted the single with a surprise show-stopping performance which included “First Class” by Jack Harlow and the classic “Mo Money, Mo Problems” with Christian King Combs and Teyana “Spike Tey” Taylor. Beyond inciting buzz globally, the live performance video has already amassed millions of views on Youtube.

Not only is Diddy one of the highest-selling artists in history, he is also one of the most accomplished music producers of all time. LOVE RECORDS represents Combs’ triumphant return to R&B as an Executive Producer, Curator and A&R of his forthcoming album. Combs will continue his oversight on his successful Bad Boy Entertainment label.

He is a cultural icon, innovator and mogul. In addition to his catalog of hit records, Diddy has produced and creatively shaped the sound for superstars Mary J. Blige, The Notorious B.I.G., Mariah Carey, Jennifer Lopez, Boyz II Men, Britney Spears, Kanye West and many more.

Lyrical Wars: Young Ghanaian rappers battle it out in front of Chance The Rapper, Vic Mensa, M.I, others

19-year-old Florida rapper Smokingskul has just shared his new single and video “Nina”. Smokingskul is at the helm of a new era of plugg music known as “dark plugg”which substitutes the ethereal sounds of “plugg” with more tonal melodies that are accentuated by distorted percussion, producing a grimey, DIY sound. END_OF_DOCUMENT_TOKEN_TO_BE_REPLACED

Massimo Youngblood, an afrobeat musician based in Ghana and the United Kingdom, has returned with a fresh new track that features Ciici Mani and one of the United Kingdom’s up-and-coming female vocalists, Laura Dia. END_OF_DOCUMENT_TOKEN_TO_BE_REPLACED

Flavour of Africa’s fiery performance on Sunday night at the 2022 SummerStage music festival in Central Park, New York will go down in history as a night to remember for lovers of African music END_OF_DOCUMENT_TOKEN_TO_BE_REPLACED

Ari Lennox sophomore season kicks into overdrive today with the official release of her new single, “Hoodie,” and its electrifying music video. Even more, fans’ long-awaited hopes are finally realized: The Grammy Award-nominated and multi-platinum singer-songwriter proudly announces her sophomore album, age/sex/location, will be released on Sept. 9 via Dreamville/Interscope Records. Pre-order the album HERE. END_OF_DOCUMENT_TOKEN_TO_BE_REPLACED