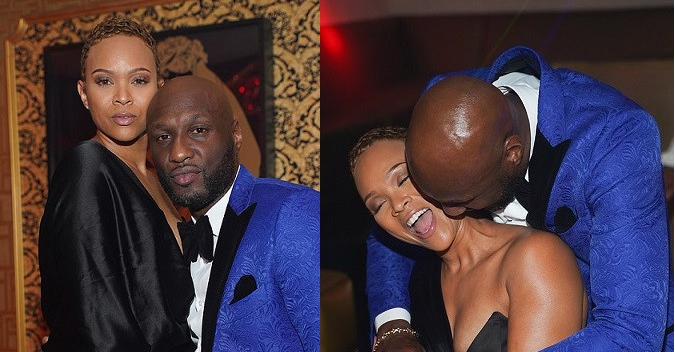 Recall the NBA star, admitted in his memoir, Darkness to Light, that he’s a ‘sex addict’ and has slept with more than 2,000 women through the years. But in a new interview, his fiancee, Sabrina Parr has disclosed that they have decided to wait until after their marriage before they can start having sex.

“Once Lamar got saved, he developed a relationship with a pastor and there’s a lot of things he just wants to grow, areas he wants to grow in, and things he wants to improve on as a man. And as a man, the pastor suggested to him, it’s not Godly if Christians like to have sex before marriage.”

Parr continued, “Obviously, he’s already had sex, so he couldn’t cut that out, but he said, ‘A great sacrifice to God would be to withhold from sex until you guys got married.’ And so, I think he really respects the pastor’s opinion and his voice.”

Parr noted that she “allowed” Odom, 40, to make this decision for them, which she noted has caused the retired athlete to want to “rush” to tie the knot. She’s in “no rush” to get married sooner, but she said her husband-to-be has been “doing very well” without having sex despite initially thinking “this would be a struggle” for him.

“One thing he told me was, the way I respect myself and the standards that I have, they’re very intriguing to him,” she explained. “So, it makes him want to honor me in that way. So, so far so good. Since we’ve been engaged, since before we’ve gotten engaged, we have been holding on strong, and the object is to do other things in place of sex. And what he’s seeing is without having sex, it improves our intimacy. We experience real intimacy when we’re not having sex.”

Odom and Parr announced their engagement last month on Instagram three months after they made their relationship known to the public.

Related Topics:Lamar odom
Up Next

PHOTOS: Celebration of The Fearless Women in Music Hosted by YouTube Music and Megan Thee Stallion

Ari Lennox sophomore season kicks into overdrive today with the official release of her new single, “Hoodie,” and its electrifying music video. Even more, fans’ long-awaited hopes are finally realized: The Grammy Award-nominated and multi-platinum singer-songwriter proudly announces her sophomore album, age/sex/location, will be released on Sept. 9 via Dreamville/Interscope Records. Pre-order the album HERE. END_OF_DOCUMENT_TOKEN_TO_BE_REPLACED

18-year-old North Carolina-based rapper Tino Szn has just shared his new video for “Drowning Out”, a fun and upbeat track off his most recent project Sentient. LISTEN END_OF_DOCUMENT_TOKEN_TO_BE_REPLACED

In a message for International Youth Day, His Royal Highness The Prince of Wales said: END_OF_DOCUMENT_TOKEN_TO_BE_REPLACED