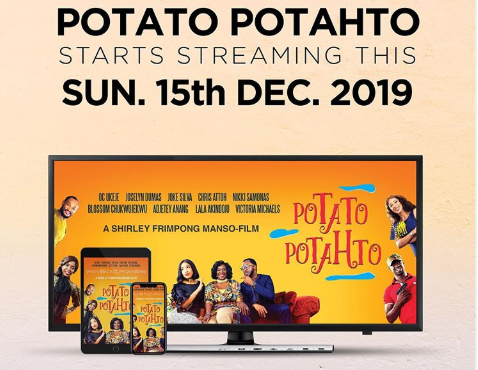 Ghana’s finest filmmaker Shirley Frimpong Manso has made yet another major move for her company, Sparrow Pictures.

The movie which premiered at the Silverbird Cinema on 30th November 2017 was a successful showing at Cannes Film Festival, Durban International Film Festival and the British Urban Film Festival. It was also part of the official selection for the Film Africa Festival which ran from October 27 to November 5.

The film, an African comedy of errors, is about a divorced couple who cannot agree on divorce terms and settle for co-ownership of their matrimonial home and other property. The movie stars Nigerian actor OC Ukeje and Ghana’s Joselyn Dumas who play the lead roles, alongside Joke Silva, Blossom Chuckwujekwu, Chris Attoh, Nikki Samonas, Adjetey Annang, Lala Akindoju and Victoria Michaels.

El Classico, X Factor :The Band, and more this week on DStv!

This Week’s episode features new music from Kay Faith, all the breaking hip hop news, and the hottest tracks of the week from around Africa! END_OF_DOCUMENT_TOKEN_TO_BE_REPLACED

Football fans on DStv already have the best seat in the stadium with SuperSport’s unrivalled football offering, and nowESPN (DStv ch. 218) is adding to the roster with  English Football League, Eredivisie and the Scottish Premiership returning, and the Belgian Jupiler Pro League joining the channel to  bring extra  football action from across Europe to audiences across the continent. END_OF_DOCUMENT_TOKEN_TO_BE_REPLACED

Hailed as “the best medical drama in years” by TIME, This Is Going To Hurt is now available to binge on Showmax END_OF_DOCUMENT_TOKEN_TO_BE_REPLACED

On Tuesday, August 2, Netflix hosted a “See What’s Next Africa” content showcase in Lagos, Nigeria, to spotlight its increased investment in Africa’s rich storytelling history through exciting new projects in a wide range of genres and formats that will be available in 190 countries. END_OF_DOCUMENT_TOKEN_TO_BE_REPLACED