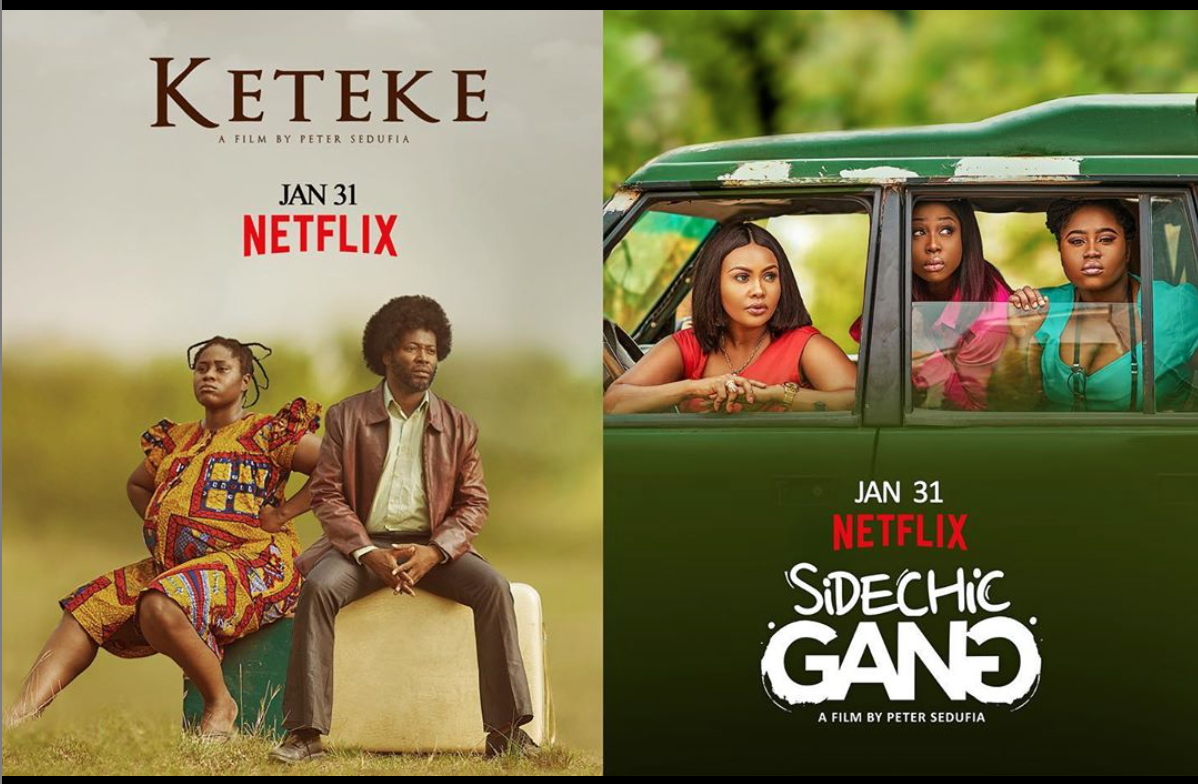 Great news for movie lovers! Two of the most critically acclaimed Ghanaian movies of 2017 and 2018, “Keteke” and “Side Chick Gang” are coming to Netflix.

The two popular movies, both directed by award-winning director Peter Sedufia, will start streaming on the 31st of January, 2020.

A very excited cast member of both movies, Lydia Forson, was the first to share the news on her social media pages.

Both movies have been nominated and won several awards since their release. 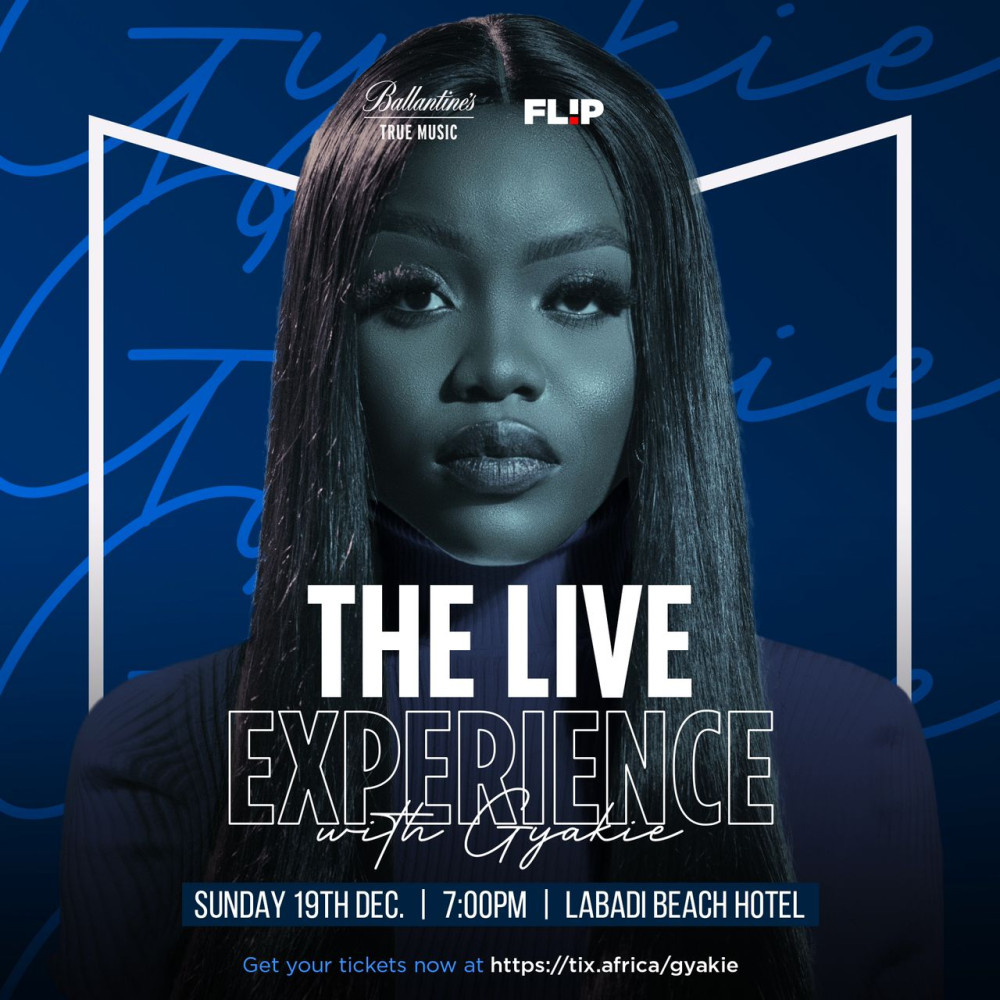 The FLIP THE MUSIC star’s terrific run of form has been a performance worth commemorating, and with the year down to its final month, Gyakie is ready to sign-off with a memorable showdown.

Slated for December 19, which happens to fall on a Sunday – a week shy of Christmas Day, the Ballantine’s sponsored concert will have the ‘Forever’ singer give fans a buzz at the La Palm Royal Beach Hotel, 7pm prompt. Dubbed ‘’The Live Experience with Gyakie’’, the concert will be curated by the artist’s label, FLIP THE MUSIC and is tipped to be one for the books.

This year, Gyakie’s presence has been strong and unrelenting. She inked a deal with Sony Music Entertainment/RCA Records UK, threw in a sassy virtual performance at the MTV Base YouTube African Day concert, featured on BBC World Service’s ‘’Focus on Africa’’ and was the first female African artist to partner with digital streaming platform (DSP) giant, Spotify on their EQUAL music program which got a billboard slot at the Times Square in New York City.

Her feats haven’t been any less extravagant on the music aisle either. She enjoyed great success with her ‘Forever’ remix for-which debuted on UK’s official Top 20 Afrobeat chart. Gyakie also emerged as 3Music Awards’ ‘’Woman of the Year’’ winner, next to her two-time feature on Billboard’s ‘’Top Triller’’ chart. The biggest highlight of her year however was on the back of her ‘’SEED’’ EP’s streaming numbers – a total of over 11 million streams across all DSPs.

Get your tickets here: https://tix.africa/gyakie 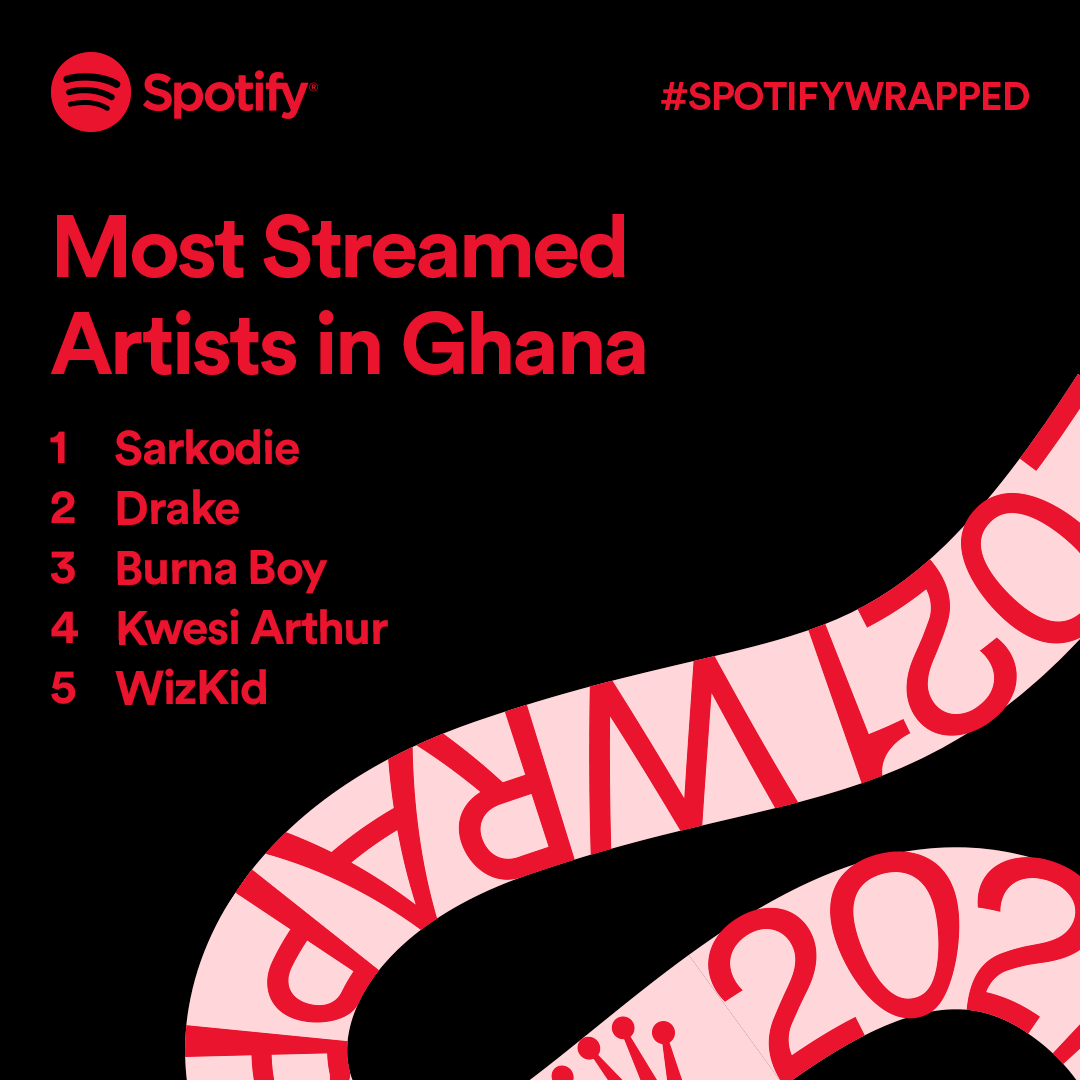 As the countdown to 2022 starts, nothing can round off this incredible year better than Spotify Wrapped, which sums up what made 365 million Spotify users around the globe vibe throughout the year.

In 2021, the world slowly came out of its quarantine lifestyle to embrace the New Normal. While at it, Spotify entered Ghana’s space, in line with the rise of audio streaming in Sub-Saharan Africa.

Now, for the fifth year running, Spotify is unveiling the top artists, albums, songs and playlists through Wrapped. Spoiler alert: the Ghanaian music industry is in for a treat as local albums and artists topped the charts among Spotify users in the country!

In Ghana, Rap, Afropop, Afro dancehall and Azontobeats were among the top genres as nightclubs reopened and people got their groove on. Speaking of rap music, none other than “King Sark” claimed the most album plays with “No Pressure” — knocking WizKid‘s “Made in Lagos” and Justin Bieber‘s “Justice” down to second and third in the process.

Sarkodie again ruled the chart as the Ghanaian people’s favourite artist, ahead of Drake and Nigeria’s Burna Boy. King Promise completed the Top 10 as one of three Ghanaian artists listed in it.

Hots Hits Ghana — featuring tracks from Black Sherif, Kuami Eugene, and Wendy Shay among others — was the most streamed playlist. In the midst of the Grammy Awards nominations buzz, it’s fair to say that Ghanaians truly support their own.

Check out Spotify’s full 2021 Wrapped results for Ghana further below. Also, be on the lookout for additional details and exciting new features in the coming days around Spotify’s popular personalised Wrapped and Creator Wrapped experiences, which gives users a deep dive into the music that defined their year. Wrapped is also now available in shareable data-driven stories format.

Most streamed artists in Ghana

Most streamed female artist in Ghana

Most streamed tracks in Ghana

Most streamed albums in Ghana

Most streamed local artists in Ghana 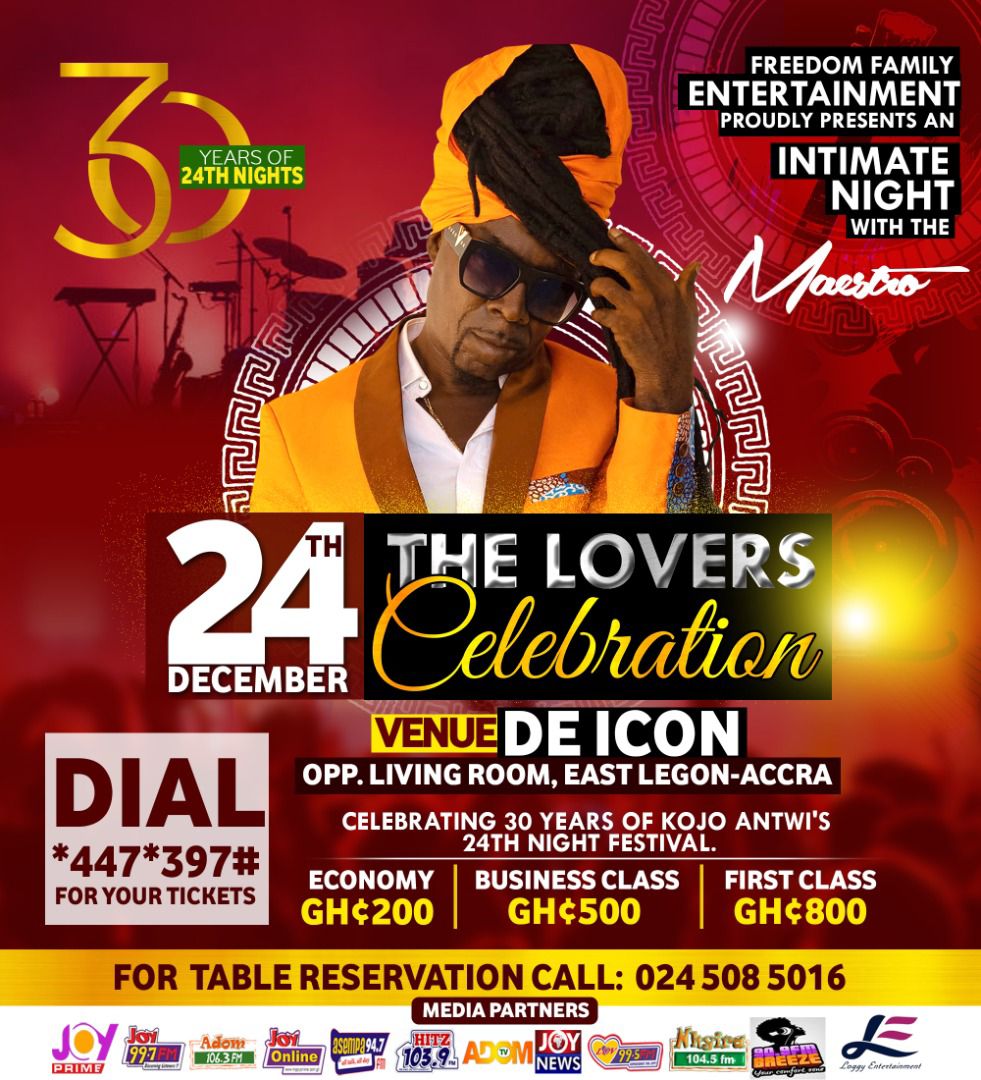 The first of his peers and blessed with the authenticity that powers victory, a class act with excellent musical delivery, Kojo Antwi celebrates 30 years of owning a date on Ghana’s national calendar.

A pacesetter and the greatest at what he does, it’s been three good decades of serving music lovers with his melodramatic performances at his flagship 24th December night shows and this year’s will be no exception.

It is in line with these memorable experiences that Kojo Antwi mounts the stage again on December 24, 2021, at De Icon Event Center, Otele Avenue in Accra, Ghana to celebrate the 30th year of owning such an iconic night.

*Organized by Freedom Family Entertainment and Loggy Entertainment and supported by  Event Vendors Association*, tickets for the intimate night with the Maestro are fast selling at GHC200 for Economy, GHC500 for Business Class and GHC800 for First Class. 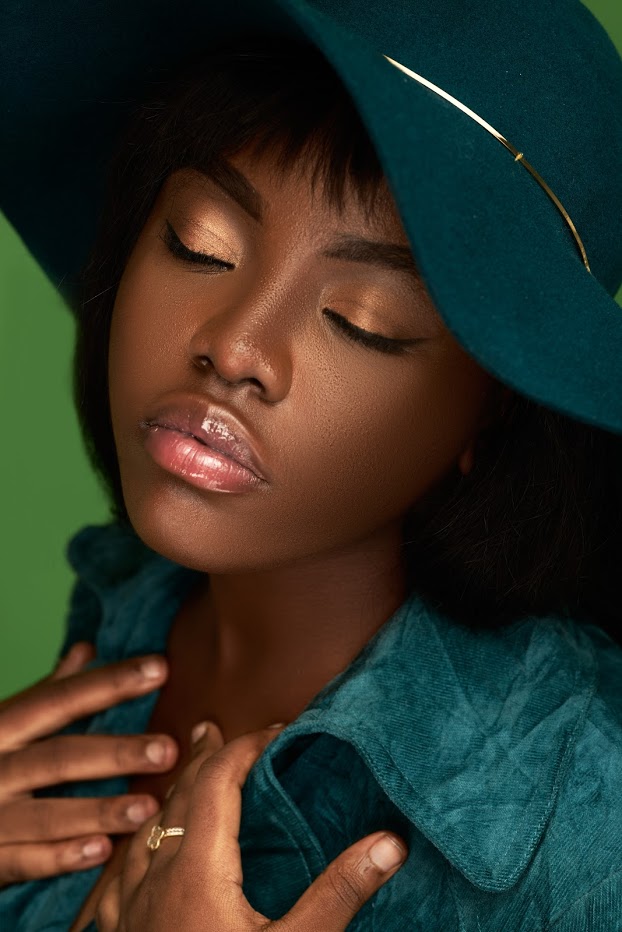 Apple Music today reveals the biggest songs of the year with its annual Top 100 charts. For the first time, Apple Music shares the Top 100 2021: Fitness chart—spotlighting the most-played workout music across Apple Music and Fitness+—besides its Top 100 Streamed Songs, Top 100 Shazamed Songs and Top 100 Most-Read Lyrics! These global charts highlight and celebrate another incredible year in music, and together they provide a truly unique and global perspective on the year’s biggest music.

Check out Apple Music’s 2021 top charts below, and listen to the full Top 100 charts-playlists on Apple Music at music.apple.com

After a year in which much of the world’s population was trapped in their homes, 2021 was all about having one foot out the door. This chart compiling the most-streamed songs across the globe on Apple Music between October 16, 2020, and October 15, 2021, is a mirror of that tentativeness and hopefulness—a mix of thrilling new hits that helped shake the world from its stasis alongside favorites we returned to when that jolt felt like too much. What they all have in common, from hip-hop upstarts to a wave of Japanese artists striving in streaming to a K-pop juggernaut primed for planetary domination, is that they brought comfort and catharsis at a time when we all needed them most.

Mic check! These are the songs our users just had to sing along to this year.

Every year, Apple Music tallies which songs had the most popular lyrics, read—and, surely, sung—by fans around the world. The top 100 are compiled into a karaoke-ready playlist, which you can find below. The top of this year’s list is dominated by Olivia Rodrigo, the TikTok sensation turned bona fide pop star with three songs in the top 10. “drivers license,” her runaway breakthrough single that was released in January when she was just 17, is a masterfully vivid postcard of vulnerability and teen heartache—rich, brooding, and melodramatic. It’s the sort of big, catchy ballad that makes you want to hit the road and belt along: “And you’re probably with that blonde girl/Who always made me doubt/She’s so much older than me/She’s everything I’m insecure about.”

Whether it’s to keep the vibes positive and uplifting, to tap into a deeper sense of purpose, or just to remind us of a great night out, the music we choose to work out to is so personal. Apple Music’s Top 100 2021: Fitness is a comprehensive look at what tracks did the trick for sweating it out in 2021. Compiling data from all of our Apple Music Fitness playlists, as well as what the Fitness+ trainer team was programming through the Studio Series, Fitness+ Spotlight collection, and even the Fitness+ workouts themselves, this set represents the year’s most-played high-energy music.

Find out which songs received the most Shazams, globally, in 2021

Think back throughout the year: How many times did you use Shazam to identify a song? Are you one of the 11.7 million fans who used the app to discover Masked Wolf’s “Astronaut in the Ocean”? The Australian hip-hop artist’s sleeper hit may have first been released in 2019, but after going viral on TikTok, it received more Shazams than any other song in the world during 2021—by quite a margin, in fact. The Weeknd came in second, with 8.5 million Shazams for “Save Your Tears,” while Ed Sheeran’s “Bad Habits” received 8.1 million. 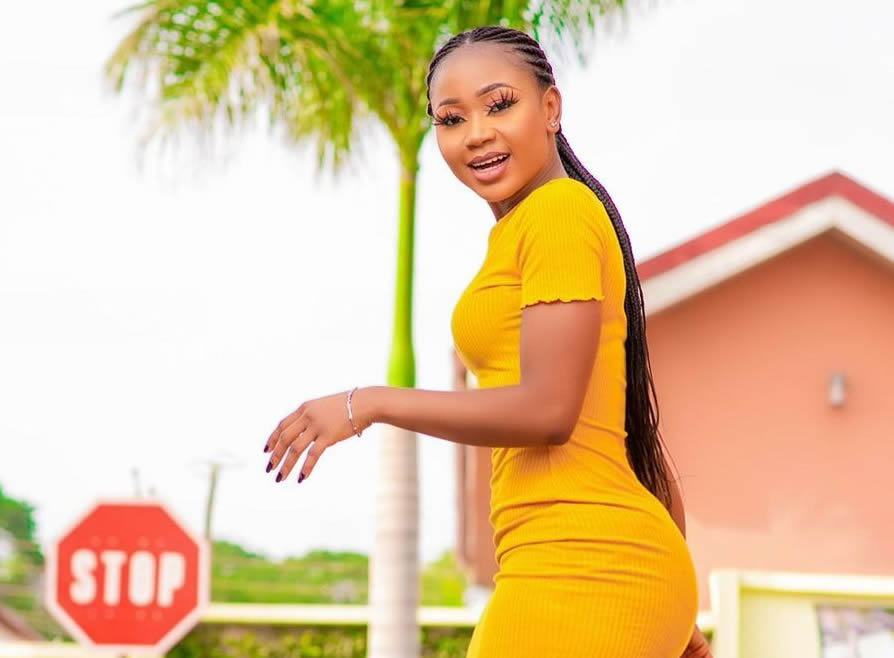 The High Court in Accra has dismissed an appeal filed by Rosemond Alade Brown a.k.a. Akuapem Poloo which sought to challenge the 90-day jail term handed to her by the Accra Circuit Court on April 16 this year. END_OF_DOCUMENT_TOKEN_TO_BE_REPLACED