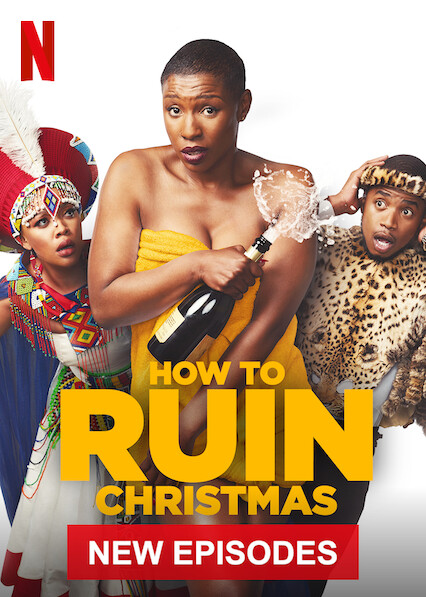 Busisiwe Lurayi, the star of the Netflix comedy series How to Ruin Christmas, has died.

The renowned South African actress was found dead on Sunday, July 10, at her home, and the news was confirmed via her agency, Eye Media Artists, on Monday, July 11. 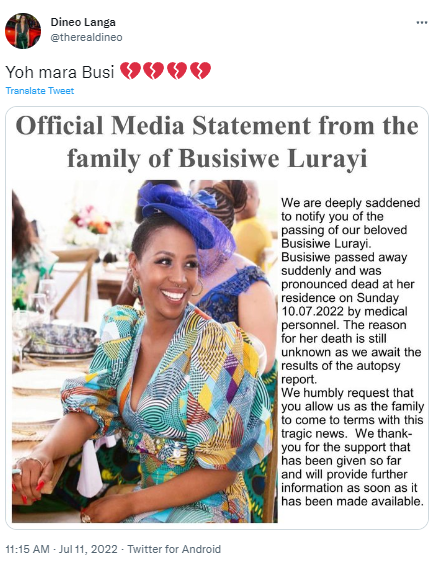 The reason for her death has not been revealed.

Read Also: WATCH: How an airport baggage handler stole a plane for a joyride before crashing it

South African stars and the general public have been pouring out the hearts on social media for the late actress. 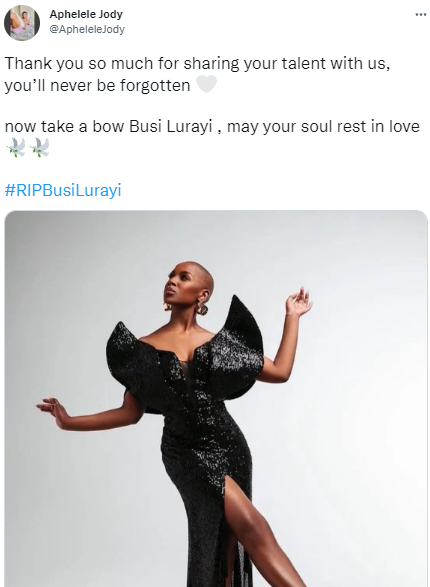 We are deeply saddened by the passing of award-winning stage and screen actor Busi Lurayi. We will hold onto the laughs, the beauty and all the moments of joy she brought us. #RIPBusiLurayi #HowToRuinChristmas pic.twitter.com/ARLg0QkYyi

Busi starred in TV shows like City Ses’La, Sokhulu and Partners, Wild At Heart and most recently on Netflix Original How To Ruin Christmas. Fans from all over the world have gone on Twitter to mourn her.

I started wanting a baby since age 23, but it didn’t happen till I was 40- Nana Ama McBrown

The woman who led the “Me nsa aka ooo” TV commercial 13 years ago to promote MTN’s Mobile Money (MoMo) has been gifted a 2-bedroom house. END_OF_DOCUMENT_TOKEN_TO_BE_REPLACED

It’s difficult to predict where Stonebwoy will be in the coming days, weeks, months, or years. As a musician with a keen interest in pushing his sound to the world and etching his name in the minds of new fans, 2022 has been described as his busiest music year thus far since gaining mainstream recognition in 2012 with Pull Up—seven years after he made his official debut—the musician confirmed this via social media after his last summer show. END_OF_DOCUMENT_TOKEN_TO_BE_REPLACED

Ghanaian actress, Nana Ama McBrown has revealed that there’s absolutely no bad blood between her and her ex boyfriend, rapper, Okyeame Kwame. END_OF_DOCUMENT_TOKEN_TO_BE_REPLACED

Veteran Ghanaian actor, Kofi Adjorlolo has denied claims that he was set to marry the mother of popular Dancehall act, Shatta Wale. END_OF_DOCUMENT_TOKEN_TO_BE_REPLACED