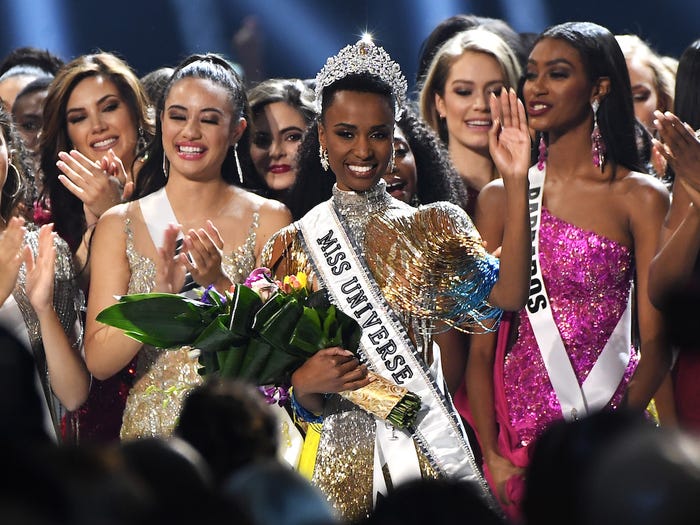 The 26-year-old pageant winner is the first black woman from her country to wear the Miss Universe crown. She works as an activist, and is particularly passionate about fighting gender-based violence. Natural beauty is also important to Tunzi, who believes women should “love themselves the way they are,” according to the Miss Universe website.

After being named the winner, Tunzi pressed her hands together against her head and grinned. She becomes the third South African to win the Miss Universe after Margaret Gardiner in 1978 and Demi-Leigh Nel-Peters in 2017.

She was up against Miss Puerto Rico and Miss Mexico, who took home second and third place respectively.

Cardi B describes Ghana experience as fun with some dilemma

The “Lioness of Africa,” Wiyaala has been invited to join the Recording Academy’s class of 2022. END_OF_DOCUMENT_TOKEN_TO_BE_REPLACED

Burna Boy has revealed in an interview that American R & B star Toni Braxton gets 60% of the royalties of his last single ‘Last Last.’ Burna Boy made this revelation when answering questions of how the single came about while appearing on a podcast. END_OF_DOCUMENT_TOKEN_TO_BE_REPLACED

Ghana have been banned from competing in the next two editions of the FIFA U17 Women’s African Qualifiers and fined $100,000 by the Confederation of African Football. END_OF_DOCUMENT_TOKEN_TO_BE_REPLACED

Although the music industry in Ghana is heavily dominated by males, there are a few young women, pulling their weight, and rubbing shoulders with their male counterparts. END_OF_DOCUMENT_TOKEN_TO_BE_REPLACED